“When a stock’s dividend yield is higher than its forward price/earnings ratio (PE), this is usually the market’s way of saying it does not believe the earnings and dividend forecast or – in a more extreme scenario – that it thinks the company is dying and on its way to the corporate knacker’s yard,” comments Russ Mould, investment director at AJ Bell.

“Newspaper publisher Trinity Mirror is currently just such a stock – trading on a PE of 3 for 2016 and a dividend yield near 7%, a classic warning sign if ever there was one. Yet the shares are up 7% this morning on the back of  trading statement which reveals a further steep drop in like-for-like sales of 8% in the first quarter (after drops of 9% in Q3 and 8% in the first half).

“This all seems to fit the market’s “print is dying” thesis – publishing revenue fell 10% in the fourth quarter as a healthy 8% increase in digital could not offset a 10% drop in print, while print advertising revenues plunged 17%.

“Yet the figures were no worse than expected and net debt is falling much more quickly than expected, from £93 million a year ago to less than £35 million. That massively reduces the risk associated with the company, cuts interest payments and frees up cash that can either be invested in the core business or returned to shareholders, via that juicy dividend yield or even share buybacks.

“The de-risking of the business is key here. Growth may be negligible and the quality of earnings relatively low, as advertising is cyclical and print advertising may be structurally challenged but if the risk associated with the balance sheet declines then the shares could still go higher, at least in the short term.  It is then up to management to prove that print can still be relevant or that the FTSE Small Cap’s digital strategy can compensate for the gradual decline of the print business.

“Value stocks have come back into fashion in the second half of 2016 and Trinity Mirror is either going to prove an absolute bargain or a terrible value trap. Price action over the year has suggested the latter, while today’s bounce offers a ray of hope that it may be the former.” 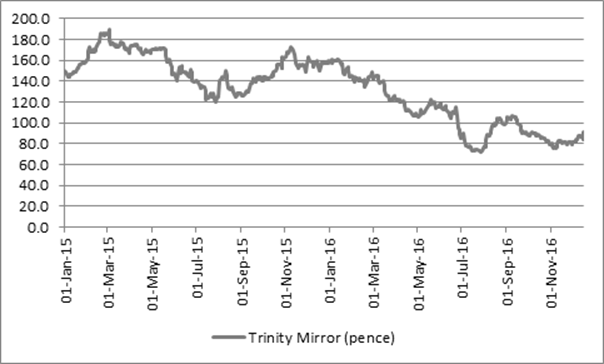