“Donald Trump’s move to withdraw America from one trade agreement and renegotiate another means the President may be misdiagnosing the cause of the US slump in manufacturing jobs and is therefore at risk of applying a medicine which does more harm than good,” says Russ Mould, investment director at AJ Bell.

“In his first full day in office America’s 45th President followed through on his campaign promise to withdraw from one trade agreement, the 12-nation Trans-Pacific Partnership (TPP), signed only in 2016, and renegotiate another, 1994’s North American Free Trade Agreement (NAFTA).

“This is all part of his plan to ensure American firms ‘onshore’ jobs and boost US manufacturing output and overall economic activity – the number of Americans employed in manufacturing peaked in 1979 at 19.6 million and has since fallen by 37% to 12.2 million, the lowest figure since 1941, barring the last recession. 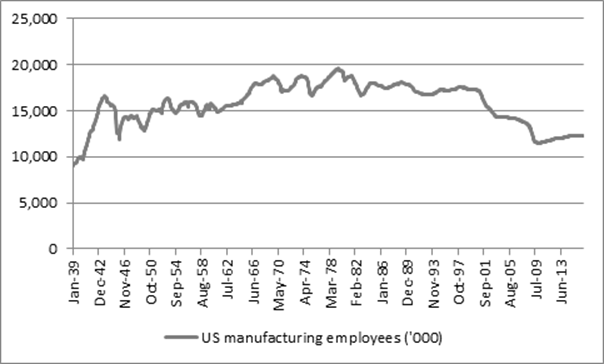 “While the goal is worthy is it possible that Trump is attacking the wrong problem when he cites global trade deals as the cause of this fall in manufacturing employment in America.

“The data only goes back to 1987, but US manufacturing output has grown by 85% over the last 30 years – even as the number of manufacturing jobs has fallen by 30%. 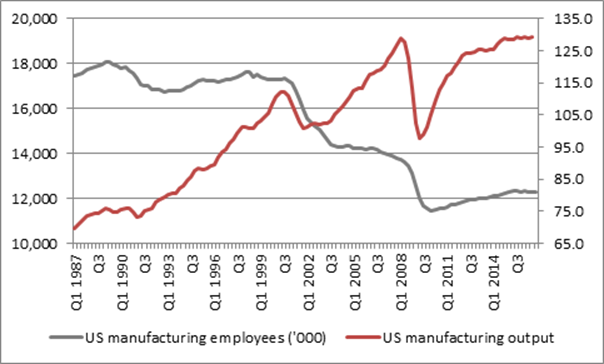 “Manufacturing jobs have grown by 7% since the 2010 trough but output has rebounded by 23% since the Financial Crisis.

“All of these figures suggest the problem is not so much a drop in manufacturing within the USA and the loss of jobs to NAFTA or TPP nations or China, but an increase in automation on American soil.

“Renegotiating or cancelling trade deals is unlikely to halt the rise of the robots, to borrow the title of Martin Ford’s book, which suggests that many more occupations are under threat, besides manufacturing.

“President Trump may therefore be better off focusing on this issue, where there are likely to be few short-term fixes but a positive pay-off from long-term planning in the form of tax incentives for research and development spending, a programme to improve national infrastructure and investment in education to prepare the next generation of workers or re-skill the current one.

“Breaking up trade deals and imposing tariffs may look like quick wins but there remains the risk that current partners and potential rivals retaliate, either with currency devaluations or trade barriers of their own, bringing long-term job losses, in what could prove to be a very uncomfortable echo of 1930’s Smoot-Hawley tariff bill, passed by President Herbert Hoover, which contributed hugely to a collapse in global trade that in turn helped to fuel the Great Depression.”