Two charts that take the temperature of US financial conditions

“America’s leading stock indices have yet to fully recover all of the ground they lost in early February but they are still in positive territory for the year, to suggest that a big freeze is not about to engulf the markets just yet,” says AJ Bell Investment Director Russ Mould.
Russ Mould
20 February 2018
Share:

“But to check whether winter may be coming (even as we move toward March), investors might like to keep a close eye on the Chicago Fed National Financial Conditions index and the St. Louis Fed Financial Stress index as a way of taking the temperature of the US economy and its financial markets.

“Both suggest that financial conditions in the US will have to worsen before the going gets really tough for stocks.”

“The Chicago Fed’s National Financial Conditions Index is constructed in a way to give it an average value of zero and the data goes back to 1971.

“The index contains no less than 105 separate indicators which cover nine specific areas of data, ranging from business credit, to shadow banking, bond and derivative and stock markets and the banking system.

“Positive values have been historically associated with tighter-than-average financial conditions.

“The good news is that the latest weekly score of -0.82 and the latest monthly reading of -0.86 are well below the 0.00 mark which has tended to signal more difficult times ahead for the S&P 500. Better still, the Chicago National Financial Conditions index has only tended to reach zero when the Fed Funds rate has reached 5%, rather than the current 1%.” 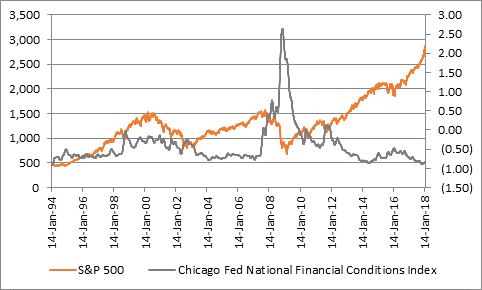 Gateway to the West

“The St. Louis Federal Reserve’s Financial Stress index monitors 18 different variables, ranging from the Fed Funds rate to a range of US Government and corporate bonds yields, credit spreads, the VIX and the performance of the equity S&P 500 Financials index.

“As with the Chicago indicator, the St. Louis gauge suggests that conditions are becoming less accommodative, even if they are far from tight.

“The latest monthly reading was -1.47, a long way from the score of 1.00 which has tended to warn of trouble ahead for securities valuations. Again, the index has tended to reach this level when the Fed Funds rate has been near 5% in nominal (pre-inflation) terms.” 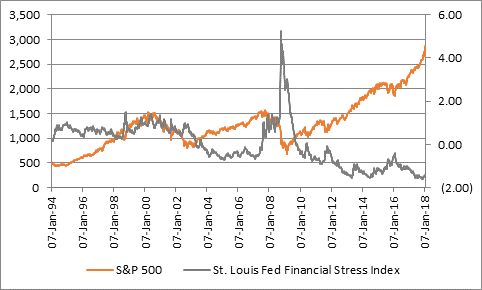 “However, markets did catch a chill in February. It is too early to tell whether this means a real storm is coming but it only took a minor deterioration in both indices, following five interest rates hikes from the Fed and a minor reduction in QE, to rock stock and bond markets and send volatility soaring.

“This does suggest that the US economy, with its record-high debts, may be more sensitive to higher interest rates than before and that as a result the US Federal Reserve will have to tread carefully.

“The Fed, now under the leadership of Jay Powell, will be keen to avoid a scenario whereby inflation gallops higher and it cannot tighten rates as much as it would like for fear of stopping the economy in its tracks, or at least unleashing stagflation.

“Its current plan is three more one-quarter-point rate hikes to 2.25% in 2018, though any sustained increase in US inflation from 2.1% (or wage inflation from 2.9%), may prompt some to worry that may not be enough and that the US central bank is behind the curve even as some may be fretting that it is doing too much too fast for lofty stock and bond valuations to be sustainable.”