“It is two years since Donald Trump was sworn in as the forty-fifth President of the United States and investors in US equities will be hoping that history is on their side, as the third year of a President’s term has, on average, been the best one for returns from American stocks,” says Russ Mould, AJ Bell investment director.

“Since 1945, the Dow Jones Industrials has fallen just three times in the third year of 17 different Presidential third terms, defined as running from the inauguration date of 20 January, and generated an average capital return of 12.6%. That easily beats the average single-digit percentage annual return from years one, two and four of a Presidency.”

Source: Refinitiv data. Each year given runs from the 20 January rather than calendar year.

“It is hard to say quite why the third year of a Presidency should the best one from the perspective of stock markets, but it may simply be that the prior year’s mid-term elections fire the starting gun on the next race to the White House. As such the incumbent President will be starting to think in terms of polls and voter-friendly policies and may therefore be inclined to run more growth-oriented policies.

“As someone who seems to at least partly measure the success of his Presidency by how the US stock market does, Mr Trump will be watching the major indices particularly keenly. The Dow Jones is up 6.5% so far but to maintain this momentum the President Trump may therefore have work to do.

“US Federal Reserve officials are starting to hint that US GDP growth could start to suffer if the ongoing Government shutdown runs for too much longer, while the benefits of the President’s trade policies and tariffs on imports, especially from China, are still hard to quantify, especially as Washington’s trade deficit with Beijing is getting worse and not better.

“Investors can therefore expect more promises of deals and compromise with both the Democrats on Capitol Hill and Beijing’s diplomats, as such talk does seem to goose the US stock indices quite nicely, but talk is cheap and firm agreements will be required at some stage to reassure nervous investors.

“Perhaps the biggest issue that faces US stocks may be beyond the President’s control (despite his public blustering to the contrary) – the US Federal Reserve’s monetary policy.

“Financial markets now believe there is a 74% chance of no change in US interest rates this year, according to the CME Fedwatch service, but the US central bank continues to reduce Quantitative Easing (QE) according to a pre-set policy that was laid out in summer 2017 when Janet Yellen was chair. That began with a reduction of $10 billion a month that has now reached $50 billion a month, or $600 billion a year, equivalent to around a sixth of the Fed’s total QE stimulus.

“The switch from QE to Quantitative Tightening (QT) may have been the biggest factor in the retreat not just in US stocks but risk assets more generally in the second half of 2018. 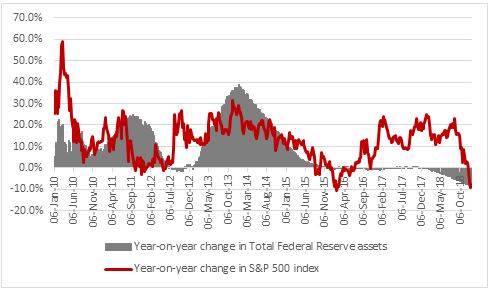 “Investors will therefore look to the President for succour when it comes to trade sanctions and Government shutdowns but it may be Fed chair Jay Powell who calls the shots when it comes to whether the third year of Mr Trump’s (first? only?) term can live up to the historical averages and provide positive returns for 2019 as a whole.”