“It is intriguing to hear Bank of England Governor Mark Carney warn of the risks posed by a spike in inflation as today’s price increase data suggests that the UK’s central bank may be getting exactly what it wished for when it cut interest rates and extended its QE bond buying scheme back in August.

“In theory the Bank of England and the Government should be cheering, since rising inflation helps the former meet its mandate and the latter erode the value of its debts and interest payments to lenders in real terms.

“Consumers may be less pleased although wage growth is running at 2.5% year-on-year so they are still better off, but there remains a danger that further wallet and purse-busting price hikes are coming down the line.

“A 15.8% leap in producer price input inflation and a 2.7% increase in producer output prices show what may be in the pipeline, especially if oil prices remain firm and the pound stays weak (the latter being another consequence of the Bank of England’s August rate cut).

“The effect of both the pound and crude can be clearly seen in the year-on-year change in the key components of the producer price inflation data, namely fuel, food and imports. (see chart below)

“The Bank of England’s official position remains that inflation will peak at around 2.8% before it recedes, as the effect of the spike in oil prices drops out.” 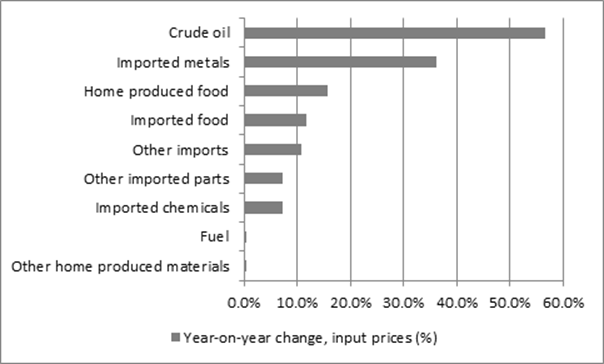