"An improvement in the third and final economic sentiment survey of the week, the services purchasing managers’ index (PMI), will offer some comfort to Chancellor of the Exchequer Philip Hammond and those investors whose portfolio strategy is based on an improvement in the UK’s economic momentum in 2017 and beyond,” says Russ Mould, investment director at AJ Bell.
5 April 2017
Share: 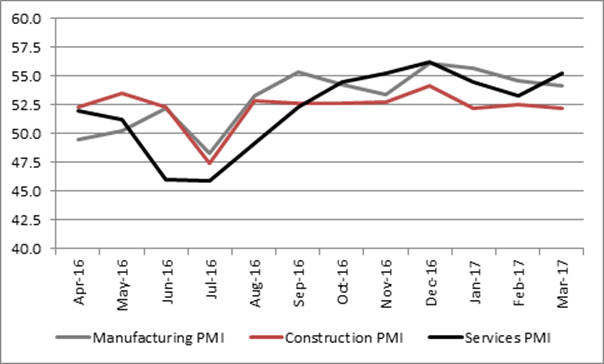 “A score above 50 from these surveys (which is all they are, rather than hard, economic fact) tends to signal confidence and prospects for future growth, whereas a score below 50 tends to warn of a slowdown or even a recession.

“Even though both Monday’s manufacturing survey and Tuesday’s construction reading both fell month-on-month they were still both comfortably above the 50 threshold. Manufacturing also came in above its 12-month average reading while construction was in line.

“The services reading should also soothe concerns that inflation would start to erode consumer confidence and chip away at shoppers’ spending power.

“As such there is no need to panic about the UK’s economic prospects, even if some may be disappointed by the lack of acceleration given the potential benefits brought to exporters in particular by the weaker pound.