“It isn’t a case of the unspeakable in pursuit of the uneatable, as Oscar Wilde once described fox-hunting, but Elon Musk’s campaign to buy Twitter could be seen as the unpredictable chasing down the unprofitable,” says AJ Bell investment director Russ Mould. “Twitter’s aggregate net loss since its 2013 stock market flotation is $1 billion and under the circumstances it is surprising to see the share price responding to the $54.20-a-share offer in such a lukewarm way. You would have thought that shareholders will welcome to chance to get shot of Twitter and move on.

“The last two years have been weighed down by $2 billion of litigation and one-off tax costs, so the numbers were not as bad as the headlines suggested. But 2019’s results benefited from a $1.2 billion one-off tax gain and stock-based compensation has totalled $4.8 billion since 2013’s listing. Employees have been well rewarded even if shareholder returns have been much less fulsome. 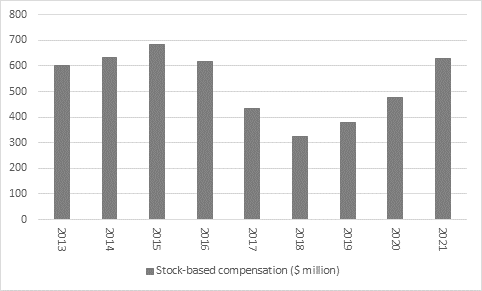 “Granted, Twitter floated at $26 in November 2013 so the $54.20 offer from Mr Musk will enable those who have patiently held on to double their money.

“But the shares closed at $44 on the first day of trading so anyone who could not get in on the float will not have done so well, especially as the S&P 500 is up by 150% and the NASDAQ Composite by 250% since the initial public offering. Nor has Twitter has ever paid a dividend, although it has returned $1.2 billion in buybacks over the past two years. 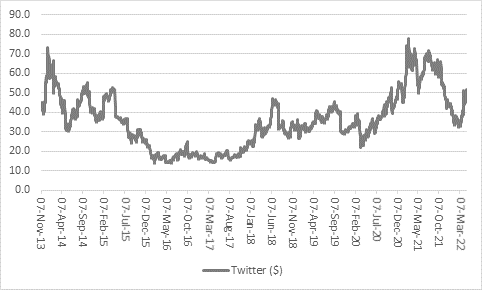 “Some shareholders may therefore be frustrated that the board looks set to accept an offer that lies some way below the shares’ all-time high of $75 reached in February 2021. But given the weak history of profitability and analysts’ forecasts for earnings in 2022 and 2023 the offer can be seen as generous.

“A price tag of $44 billion compares to forecast net profit of just $112 million in 2023 and $324 million for 2023, equivalent to a price/earnings ratio of well over 100 – a huge premium relative to a US equity market which trades on forward multiples of earnings in the mid-20s (and mid-30s, according to Professor Robert Shiller’s cyclically adjusted price earnings, or CAPE, ratio). 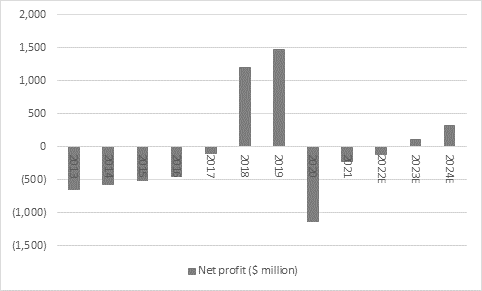 “Nevertheless, the Twitter share price is still trading below Mr Musk’s offer. Perhaps this is the result of concerns over the financing package behind the deal, even if Mr Musk seems to have everything in place, unlike when he launched his putative $420-a-share bid for Tesla (via Twitter) in summer 2018. The $25.5 billion in debt associated with the deal may be a concern too, as it will swamp Twitter’s $847 million net cash pile and leave the firm with a substantial interest bill, to further crimp the bottom line. There must also be a nagging doubt that some advertisers may quit the platform once Mr Musk asserts control, although some new advertisers could choose to join as a result.

“Perhaps the share price also reflects the board’s apparent reticence to accept the bid, which could itself be the result of much adverse comment about the deal from Twitter users.

“The debate over what constitutes free speech and democracy is only likely to heat up but even the most-hardened sceptics will have to accept one thing: Mr Musk is prepared to pay to use the service, which is more than can be said of the vast majority of Twitter’s customers, something that could be seen as a fundamental failing of the company’s business model.

“Whether Tesla shareholders need to be nervous is a separate issue. Given how Mr Musk’s energies are already spread across Tesla’s car and solar energy operations and SpaceX, loyalists are unlikely to be concerned about the serial entrepreneur giving himself something else to do.

“However, this sort of leveraged buy-out (LBO) deal does have a creepily ‘top-of-the-cycle’ feel to it. Twitter’s business model and financial performance do not scream that it is well suited to an LBO, while every cycle is, with the benefit of hindsight, characterised by one or two deals which turn out to have been struck at the wrong price at the wrong time for the wrong company.

“Texan utility TXU rang that particular bell in 2007, when KKR, Goldman Sachs and TPG orchestrated a $45 billion LBO, and everyone will be hoping that the Twitter deal, should it close, is not the canary in the coalmine this time around.

“After all, Mr Musk is taking a good deal of risk by using Tesla shares as collateral. If the electric car maker’s shares were to unexpectedly crater that could create a lot of discomfort, even if his 2018 pay deal allows him to exercise options priced at just $70 a pop and he is, on paper, the world’s wealthiest person.”