US jobs figures disappoint – but does it, and should it, matter?

“The headline non-farm payrolls number of 235,000 new jobs created in the US undershot forecasts, but the unemployment rate of 5.2% met them and wage growth of 4.3% year-on-year exceeded expectations. The dollar is weakening – and gold and Bitcoin are strengthening – in the view this mixed bag of numbers means the US Federal Reserve will taper Quantitative Easing slowly, and perhaps more slowly than previously planned,” says AJ Bell Investment Director Russ Mould. “It’s unlikely the Fed needs too many excuses to do nothing, especially none of its three previous attempts to tighten monetary policy over the past decade lasted long, but surely things have come to a pretty pass if one set of monthly jobs data is enough to set the tone for monetary policy at the world’s most powerful central bank?

“The numbers are backward-looking and prone to revision (the last two months’ payrolls numbers were both revised upward alongside the latest data release) and so may not be the most reliable basis for taking such an important decision. 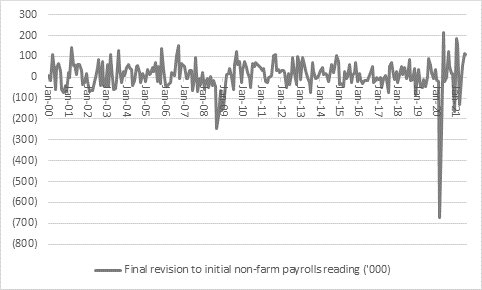 “As the American writer Henry Hazlitt once noted: ‘The art of economics consists of looking not merely at the immediate but at the longer effects of any act or policy; it consists of tracing the consequences of that policy for not merely one group, but all groups.’

“The markets may therefore be looking to read too much into one set of figures, while the Fed’s manipulation of bond yields and interest rate leaves it operating beyond its dual mandate covers inflation and employment. The central bank has regularly noted its desire to create a wealth effect, using Quantitative Easing and low interest rates to goose asset prices, and with the prices for shares, real estate, cryptocurrency and non-fungible tokens, to name but four, roaring away, you can say they are succeeding.

“But this begs the question of what happens when the Fed meets its inflation and employment goal and needs to take away stimulus. Three prior attempts to stop adding to and even withdraw QE in the past decade did not last long and even minor rate rises were provoking talk of dislocations in interbank lending markets in autumn 2019, before the pandemic made its presence felt. 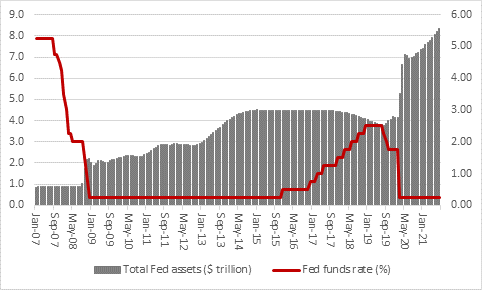 “According to Fed data, US households and non-profit organisation have never been so exposed to the stock market, with some 40% of their total assets held here.

“On the only three prior occasions when that ratio exceeded 20% - the roaring bull market of the late 1960s, the surging tech bubble of the late 1990s and then the early 2000s – trouble quickly followed as valuations proved unsustainable, capital was misallocated and eventually money and confidence lost. 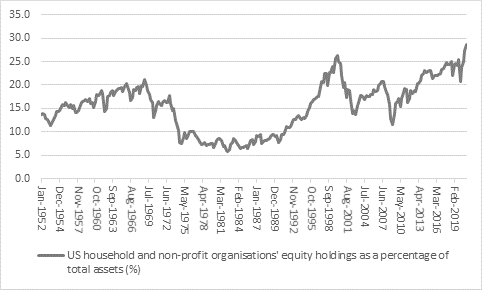 “The last-published figure is 28.6%. Whereas it is normal to argue that a recession causes a bear market in stocks, it is possible that the situation may be reversed this time, as a bear market would unravel whatever wealth effect the Fed feels it has achieved.” 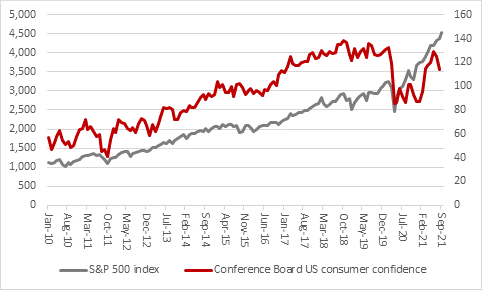