“Today’s non-farm payrolls number of 98,000 muddies the waters when it comes to the timing of the next US Federal Reserve rate hike – especially if sticky inventories, stalling car sales and weak industrial capacity utilisation rate are just three indicators which suggest its economy is not best-placed to withstand the dollar gains and bond yield increases which may follow.

“March’s 98,000 non-farm payroll additions hugely undershot consensus forecasts for a gain of 174,000. The January and February numbers were also revised lower and the trend does seem to be showing a loss of momentum in US job creation since the start of 2015.

“Despite a drop in the headline unemployment rate to 4.5% wage inflation cooled slightly to 2.7% from 2.8% in February. That wage figure may still be enough to keep the Federal Reserve on a state of alert and the market is putting a 63% chance on a Fed rate rise on 14 June, the next-but-one meeting of the FOMC, given the Fed’s “data dependent” stance.

Percentage chance of further rate hikes by Fed meeting in 2017

“Yet unemployment is by definition a lagging indicator, given how long it takes for firms to feel profitable and confident enough to add staff and then go through the lengthy process of candidate selection.

“Despite the importance of wage growth it may therefore be less useful than concurrent indicators (retail sales, industrial production) or leading indicators (PMIs and sentiment surveys).

“The Fed may still feel emboldened by both retail sales and industrial production, which have shown signs of improvement after a soggy spell in late 2015 and early-mid 2016: 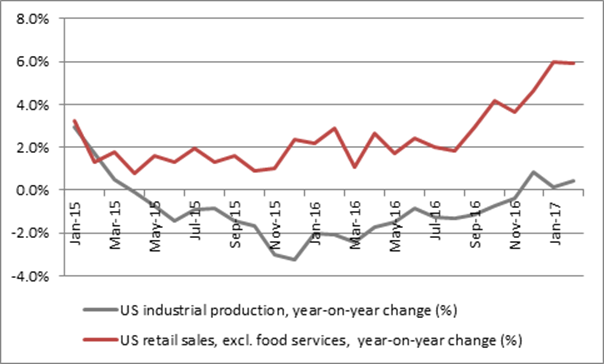 “Chair Janet Yellen and her fellow FOMC members may also be drawing encouragement from the forward-looking sentiment surveys, or purchasing managers’ indices, for both manufacturing and services indices. The readings on both sets of data lie comfortably above 50, to suggest future growth and expansion, having also recovered from a worrying-looking dip in late 2015 and early 2016. A score below 50 are generally seen as warnings of a slowdown or potential recession): 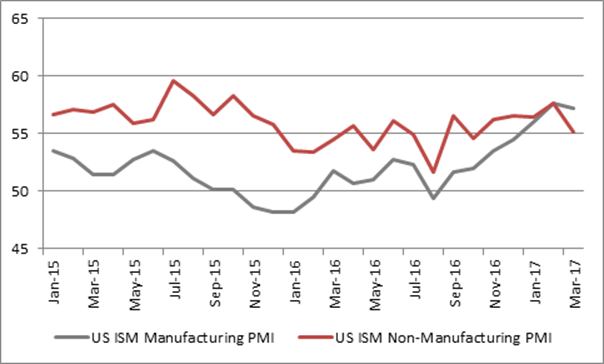 “On the face of it, lagging, concurrent and leading indicators all look set fair and suggest the Fed may even be behind the curve when it comes to tightening policy, having taken from December 2015 to March 2017 to eke out three increases in interest rates of 0.25% apiece.

“The Fed does seem to be taking a tougher stance, hinting at two more rate hikes in 2017 (at least) and even debating whether now is the time to start shrinking its $4.5 trillion balance sheet and sterilise its quantitative easing (QE) bond-buying scheme.

“Despite its talk of more rate hikes and even the sterilising QE, the minutes of the March FOMC meeting did feature this very telling hedge, which noted:

“A number of participants [FOMC members] indicated that the Committee should resume asset purchases only if substantially adverse economic circumstances warranted greater monetary policy accommodation than could be provided by lowering the federal funds rate to the effective lower bound.”

“In other words, adding to QE was discussed at the same time as the Fed talked about winding it down.

“Investors should not be too dogmatic in asserting that the reflation trade is going to play out exactly or as smoothly as planned, to the benefit of equities and detriment of bonds (something also hinted at by the recent rally in both US Treasuries and UK Gilts), and keep a well-balanced portfolio prepared to meet any eventuality, as the range of potential economic and monetary policy outcomes remains very wide, if the Fed’s own words are to be taken at face value.”