What’s behind the Cash ISA crunch?

•    Low interest rates and the personal savings allowance are stifling the Cash ISA market
•    Moneyfacts data released yesterday shows Cash ISA rates are at record lows and the number of deals on the market has fallen by almost a quarter in two years
•    The FCA Financial Lives survey out last week showed Cash ISAs are the only savings product to fall in popularity in the last three years
•    £4.8 billion was withdrawn from bank and building society Cash ISAs in the last six months of 2020, the highest H2 outflow on record, according to Bank of England data released earlier this month
•    AJ Bell research has found that £10,000 held in the average cash ISA over the last ten years would now be worth £9,772 after adjusting for inflation
•    Based on current average ISA rates from Moneyfacts, a basic rate taxpayer would need a Cash ISA pot of £416,667 to benefit from the tax wrapper

“Twelve years of ultra-loose monetary policy and the introduction of the personal saving allowance has left the Cash ISA looking like a shadow of its former self, and it’s hard to see a great deal of value in the product as it stands today.

“There used to be a Cash ISA rates war at the end of each tax year, as providers competed to attract savers, and jostled for position in the best buy tables. Not so any more, and given the low rates on offer, it’s little wonder the Cash ISA seems to be declining in popularity. The introduction of the Help to Buy ISA, and more recently the Lifetime ISA, have also probably lured some savers away from the traditional Cash ISA.

“The allowance means basic rate taxpayers can receive £1,000 of interest each year without paying any tax. For higher rate taxpayers that figure is £500. When interest rates are so low, that means most people need to hold an eyewatering amount of money in cash before the Cash ISA wrapper offers any worthwhile protection from the taxman. Things are different for additional rate taxpayers, who start paying tax on the first £1 of interest they receive from savings, so for them it is still undoubtedly a valuable tax shelter, albeit rates of interest still aren’t enticing.

“A Cash ISA does also offer some element of future-proofing against interest rate rises and changes to the tax system, in particular if the personal savings allowance were to be withdrawn at any point. It’s now also possible to switch between a Cash ISA and Stocks and Shares ISA without using up any fresh allowance, so the tax wrapper could still be valuable for those looking to invest the money further down the line.

“There are still some circumstances in which a Cash ISA makes good financial sense. But many savers and investors will be looking across at other cash products, and at Stocks & Shares ISAs, and wondering precisely what a Cash ISA brings to the party.”

The latest data from Moneyfacts, shows that the average easy access Cash ISA now pays just 0.24% annual interest. Basic rate taxpayers receive £1,000 of savings interest tax-free even without the Cash ISA wrapper, so based on that average rate, they would need a cash pile of £416,667 sitting in a Cash ISA before it started saving them tax. The figure for a higher rate taxpayer would be £208,333, as they only receive a £500 personal savings allowance. Additional rate taxpayers don’t get a Personal Savings Allowance, so a Cash ISA starts saving tax from the first £1 of interest received.

The long run effect of inflation

AJ Bell Analysis found that £10,000 held in the average cash ISA over the last ten years would now be worth £9,772 after adjusting for inflation. A saver using their entire Cash ISA allowance each year since 2011 would have seen £127,320 turned into £124,857 in real terms. The same amount placed into the average global stock market fund would now be worth £196,079 in real terms

The falling popularity of Cash ISAs

Last week the FCA Financial Lives survey showed that the Cash ISA was the only savings product to become less popular in the last three years. 36% of people reported having a cash ISA in 2020, compared to 37% in 2017. This shows only a mild decline, but when you consider the number of people with Premium Bonds increased from 21% to 26% over the same period, it looks like a pretty poor performance. 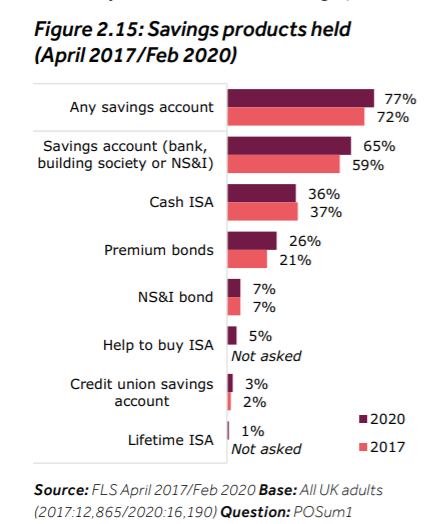 Earlier this month, the Bank of England published data showing £4.8 billion was withdrawn from bank and building society Cash ISAs in the last six months of 2020, the highest H2 outflow on record. This is against the backdrop of £72 billion flowing into cash deposit accounts in the same period, also according to the Bank of England, as social restrictions prevented consumers from spending their income on leisure activities. 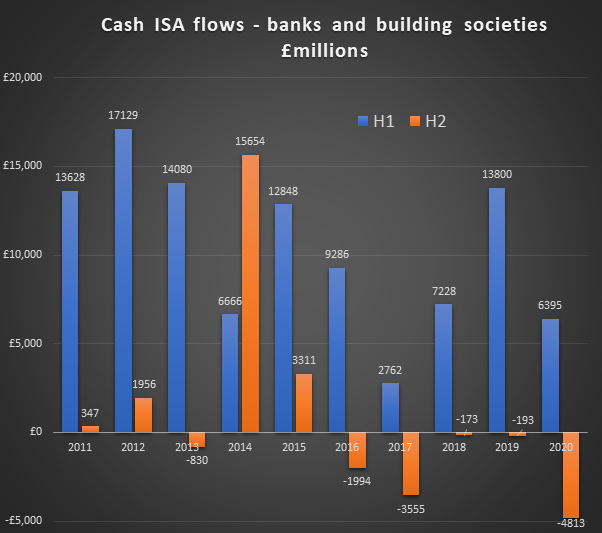