Why the Fed’s debate about shrinking its balance sheet really, really matters

“The minutes from the Federal Open Market Committee’s monetary policy meeting on 14 March, published yesterday evening, show that Janet Yellen and the US Federal Reserve are moving toward withdrawing quantitative easing (QE) and shrinking the central bank’s balance sheet, in what would be a key test of both the strength of America’s economy and its financial markets.

“While any such move to reduce the size of its balance sheet and ‘sterilise’ QE will be seen by some as the ultimate sign of the bond-buying scheme’s success – namely that the US economy is back on track 10 years after the first signs of sub-prime mortgage distress became clear and finally capable of functioning without emergency support.

“Yet sceptics will argue this is the ultimate test of not just the US economy but America’s stock market. Even bulls of the S&P 500 used to regularly parade the chart below, which maps the size of the Fed’s balance sheet against the headline US index, although it has become less prevalent since the Yellen-led Fed started to reduce the size of QE in December 2013 and stopped adding to it altogether in October 2014. 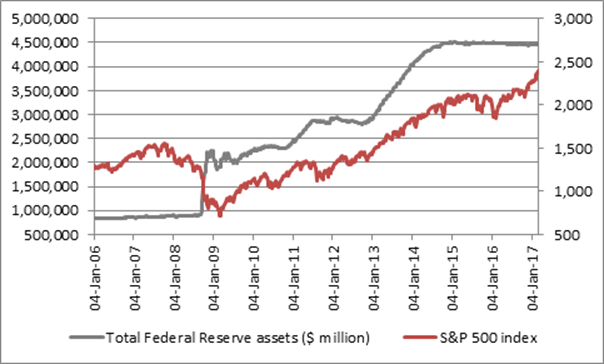 “Since the launch of the QE bond-buying scheme in autumn 2008 under Ben Bernanke the assets on the US Federal Reserve’s balance sheet have swelled from $900 billion to $4.5 trillion.

“This prompted doubters to argue the US economy and its stock market were being supported by the Fed’s newly-created money and efforts to drive bond yields (and thus borrowing costs) to unsustainably low levels, creating unforeseen side effects, such as huge increased levels of borrowing by consumers and corporations, companies buying back shares with cheap debt to goose their reported earnings figures and a bull run in stocks which at times appeared to rely more on cheap money than it did on corporate profits and cash flows.

“The FOMC minutes offer no promises of sterilisation and stress that any move to withdraw this stimulus would be made gradually, mirroring the baby steps made under Janet Yellen to tighten monetary policy via three interest rate increases so far (since December 2015) and the decision to stop adding to QE in 2014.

“The battle lines are now drawn between bulls, looking forward to a healed US economy and one fired up by the proposed Trump reform programme, and bears pointing toward historically very high valuations on a market-cap-to-GDP and cyclically-adjusted price earnings (CAPE or Shiller PE) basis, moderate corporate profit momentum and the withdrawal of QE as key obstacles toward fresh advances in US stocks.

“All of this also matters to investors in the UK’s stock market, even if they have no direct exposure to the USA at all. This is because in stock market terms the UK tends to follow where America goes: 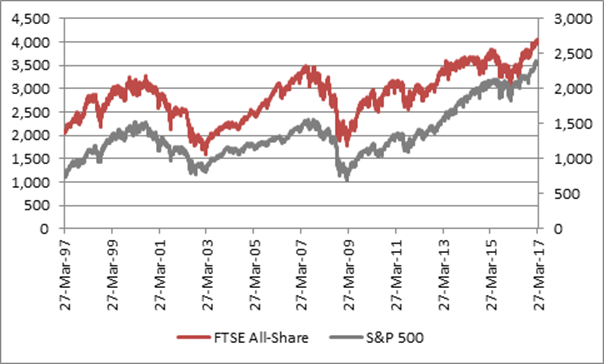