“In stark contrast to the record or near-record highs shown in many indices, such as America’s S&P500 and NASDAQ Composite, Germany’s DAX and France’s CAC-40, the FTSE 100 is no higher than it was at Christmas 2016, when Theresa May was wrestling with Brexit,” says AJ Bell Investment Director Russ Mould. “Yet in 2022, aggregate FTSE 100 net profit is forecast to be double where it was in 2016 and dividends are expected to come in more than one-fifth higher. Throw in how the pound is still 10% lower against the dollar and euro than it was at the time of 2016’s EU membership referendum and contrarians will be tempted to give the UK market another try in the coming 12 months, after yet another year when the FTSE 100 has lagged its major overseas counterparts.

“It is possible to argue that the UK stock market is cheap because it deserves to be, given the FTSE 100’s heavy weightings toward the unpredictable (oils and miners), the indigestible (banks and insurers) and the beyond-the-pale, at least so far as ESG screens are concerned (tobacco, oils, miners, bookmakers and defence stocks).

“Sceptics may therefore assert that finding an incremental buyer for certain stocks will be hard as so many investors run ESG screens against many FTSE 100 stocks and simply turn away.

“Yet a forward price/earnings ratio of 12.5 times and coupled with a dividend yield of 4.1% may be enough to tempt some, especially as earnings cover for dividend is forecast by analysts to reach 1.95 times. That is the highest it has been since 2014 and is within touching distance of the magic 2.00 level that offers some sort of cushion against any unexpected setbacks. 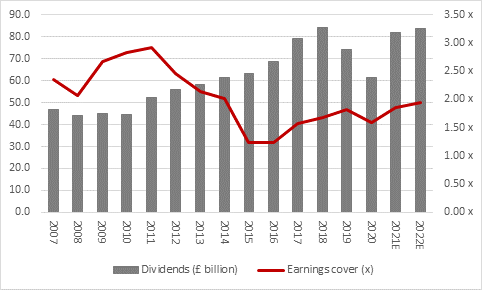 “Admittedly, consensus forecast earnings growth of 8% for 2022, alongside 2% dividend growth, may not set pulses racing. But there is the potential for upside to those estimates, especially as the slant of earnings towards oils, miners and banks means the FTSE 100 may be one of the indices that is better suited to an inflationary economic upturn, gradual interest rate rises and a steepening of the yield curve.

“This is because its cyclical components, under that scenario, should be able to offer plenty of near-term earnings growth and do so from the starting point of low valuation multiples – so the offer here would be jam today at low prices.

“That would contrast with markets like the USA, which is packed with tech, social media, internet and biotech stocks that offer the prospect of long-term earnings growth from the starting point of high valuation multiples – so the package here is jam tomorrow at high prices.

“In the event of further episodes of the pandemic and an economic downturn, investors are frankly likely to take the jam tomorrow option, on the grounds that many of the US megacap tech stocks have business models which offer some (but not total) resilience to and independence of the economic cycle.

“But ‘jam today’ might look better if inflation takes off, commodity prices tick higher and investors see GDP and corporate revenues start to advance smartly, at least in nominal terms.

“Overall, analysts’ consensus forecasts currently call for an 6% advance in aggregate FTSE pre-tax income and an 8% advance in (underlying) net income 2022, to £245.1 billion and £163 billion respectively. If attained, both would represent new all-time highs and major advances on their marks of 2016, when the FTSE 100 was still trading around the 7,100 mark. 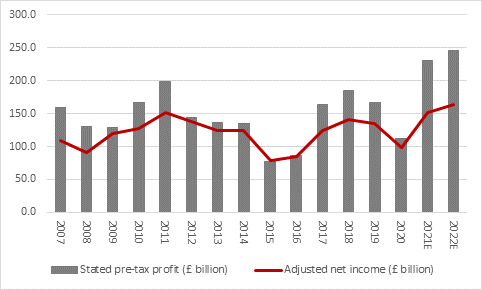 One possible strategy for 2022, after the Omicron scare, is to look for companies
whose financial performance and share price have suffered because of the pandemic but whose business model remains sound because they may have the potential to surprise on the upside if the variant is beaten off quickly. One possible candidate in this respect is medical equipment specialist Smith & Nephew, perhaps best known for its replacement hips and knees.

COVID-19 has forced the postponement of non-elective medical procedures, while fewer patients have chosen to have ear, nose and throat (ENT) operations. Sports Medicine has also been affected, as fewer athletes participated in events, either professionally or for fun. The drop in the number of surgeries has also had a knock-on effect upon high-margin after-sales of consumables such as dressings.

However, these headwinds could soon become tailwinds. Demand for orthopaedic surgery could bounce back once economies open up, and patients and surgeons feel a procedure can be carried out as safely as before. Consumables and Sports Medicine sales could rebound too, and the restructuring costs may come down.

A 2% dividend yield may not turn too many heads but the unchanged interim dividend this summer points to both confidence in the future and Smith & Nephew’s financial solidity. The balance sheet carries relatively little debt, interest cover was still nearly five times despite 2020’s troubles and the company has a history of cash generation and double-digit percentage returns on capital. As a result, Smith & Nephew may just offer the right combination of defensive qualities and upside potential.

Fuller, Smith & Turner may still be best known for its beer and brewery in Chiswick, west London but the company is now a very different one. Having sold the beer and drinks business in 2019, the firm now manages a large estate of pubs, either directly or via tenants, and runs a select number of hotels. The assets are generally situated in the south of England, in towns, villages or rural areas.

This may seem like a dangerous pick as scientists and politicians try to work out what the Omicron variant may mean, let alone financial markets. But the best investments are often the ones that make you feel most uncomfortable and Fuller, Smith & Turner may just offer the ideal combination of downside protection and scope for upside surprise.

If the Omicron scare passes quickly, then company should be well placed to benefit from rising footfall in commuter hubs, high streets and tourist hotspots as thirsty and hungry customers return to its well-tended estate.

If it does not, we have some downside protection. Net debt is low and the £416 million market capitalisation compares to a conservative valuation of the firm’s net assets of £441 million, so the shares are trading below book value. That already prices in a lot of bad news.

It might sound bonkers, especially as it is possibly the direct opposite of what campaigners are looking to achieve, but uranium might just be one of the big winners from the COP26 summit in Glasgow, at least from the very narrow perspective of investment. This brings Yellow Cake (YCA:AIM) into play.

The firm stores U₃O₈ in its specialist warehouses and is busily adding to its stockpiles. The uranium price is still strong after a near 60% gain over the past year to $46 a pound and the scramble for reliable supply seems to be well and truly on, at both industrial buyers (even the world’s leading producer, Kazatomprom, is putting money into a new fund) and financial ones (as the Sprott Physical Uranium Trust continues to gobble up product in what remains a tight spot market).

But uranium price peaked at north of $130 a pound in 2007 so it could run a lot further if political momentum behind nuclear power continues to gather. And gathering it is, since nuclear power plants produce no greenhouse gas emissions when they operate and even allowing for construction and decommissioning they have a low carbon footprint

China has announced plans to build 150 new nuclear plants and quadruple its nuclear power capacity; President Macron has declared that France will restart its nuclear power programme; Japan’s new Prime Minister, Fumio Kishida, has said he favoured restarting 30 or more Japanese nuclear sites that have remained idle since 2011’s Fukushima accident; and the UK has begun to champion Rolls-Royce’s modular nuclear reactors.
If uranium prices keep rising, then so will the value of Yellow Cake’s 17.9 million pounds of uranium (and it has an option to buy another one million pounds by next June). That inventory carries a market value of around £625 million and the company’s market cap is currently a fraction below that.

This one will not win any friends among those investors who run strict ethical, social and governance (ESG) screen tests, but oil major Shell (as it will be known, pending shareholder approval on 10 December) may appeal to those income-seekers for whom profit is every bit as important as principle.

A forecast dividend yield of 4.4% for 2022 will help to protect investors’ cash from the ravages of inflation and Shell may well top up that with further cash returns via share buybacks. The company has just announced a $1.5 billion buyback to kick off a $7 billion programme, as it deploys the money raised by the sale of shale assets in the USA.

Granted, the share price could be volatile as oil and gas prices jump around, but they seem relatively well underpinned, unless there a new and terrible COVID variant leads to a fresh collapse in economic activity. Demand for hydrocarbons could even rise in the short term, if the economy keeps recovering, as the renewable alternatives are not yet available in sufficient quantity to take up the slack, and supply growth is going to be limited, owing to public and political pressure, a paucity of available finance and insurance and the oil majors’ plans to switch their investment focus from oil and gas to future energy sources.

Firm oil and gas prices will support Shell’s cash flow and it is that cash flow which pays the dividends.