Why the inflation debate is more than just hot air

“Current US Treasury Secretary Janet Yellen and one of her predecessors, Larry Summers (also reportedly unsuccessful candidate for the chair of the Federal Reserve when Yellen got that post in 2013) are publicly slugging it out over the topic of inflation. Mr Summers says the combination of ultra-loose monetary policy plus more fiscal stimulus will lead to inflation but Ms Yellen disagrees, as she calls for the Biden administration to ‘go big’ on Government spending,” says Russ Mould, AJ Bell Investment Director. “Inflation is currently so low that such a debate may seem a little arcane but to consumers, savers and investors it really does matter.

“If Ms. Yellen is right, then investment portfolios can stay slanted toward momentum and growth strategies and long-duration assets such as Government bonds with a decade to maturity or more and technology and biotechnology stocks – in other words, what has a great track record over the last decade will keep delivering, at least if history is any guide.

“But if Mr. Summers is right, then the whole game changes. If inflation pops higher and stays that way, then history suggests investors need to be exposed to short-duration assets such as ‘value’ equities (cyclical growth and recovery stocks), emerging markets and ‘real’ assets such as commodities and precious metals, again if history is any sort of guide. 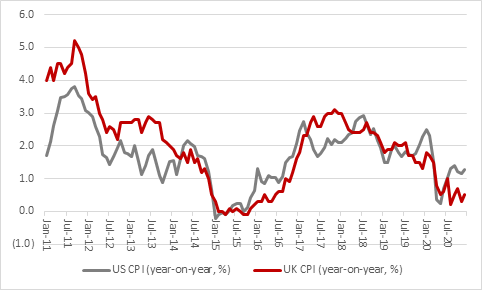 “The headline inflation numbers are benign at the moment although a base effect will start to come into play for the rest of 2021, as the pandemic-induced recession comes up as a comparator.

“Doubtless central banks will dismiss that as transitory rather than signs of a fundamental increase in cost pressures, even if the price of vital raw materials from oil to metals to crops is on the march if the Bloomberg Commodity index and shipping’s Baltic Dry benchmark are reliable guides. If there is any good news here is might be that the Shanghai Containerised Freight index is maybe topping out after a stunning run, but all these trends could be indicators of cost pressures building in the pipeline. 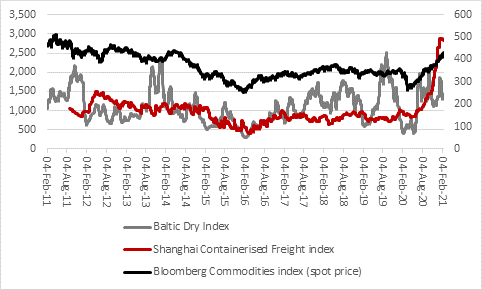 “Companies are already paying attention. Input costs and output prices are showing some momentum in the UK, even if the reflect the modest overall headline inflation figures for the moment, while American firms are flagging a sharp increase in their costs in the latest purchasing managers’ indices.

“Muted demand, owing to the pandemic, lockdowns, and increased unemployment, could keep a lid on this trend but a strong bounce back at a time when supply is crimped by company closures and supply chain disruption remains a possibility, too. 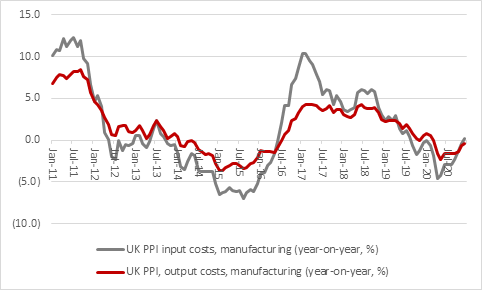 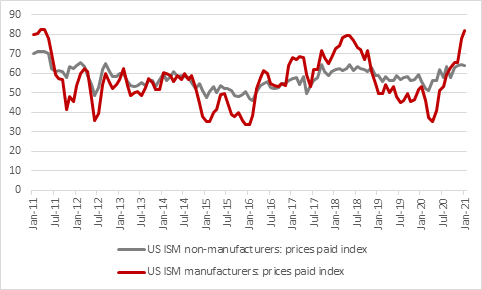 Source: US institute for Supply Management

“Fixed-income investors are paying attention, too, because government bonds yields are rising. They still stand at what are still historically low levels, though, so it would be wrong to say bond investors are in a tizzy. 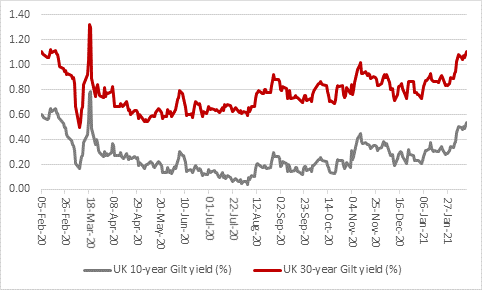 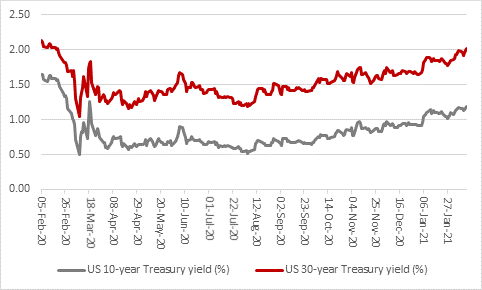 “Fixed-income markets therefore still seem to believe the Yellen narrative that inflation can be managed and - presumably – that central banks can just keep throwing money at fixed-income markets via QE to put a lid on bond yields. That would keep bond prices high but Gilts’ and Treasuries’ skinny yields would offer holders little or no protection if the inflation genie finally pops out of the bottle.

“There is no guarantee that the genie will appear, especially as bond vigilantes arguments’ that the combination of record-low interest rates, Quantitative Easing and swollen central bank balance sheets are yet to be borne out (other than in the area of financial markets where price inflation seems to be rampant, although the monetary authorities seem relatively unconcerned about this).

“Even if it does, central bankers may be proven correct in their forecast that they will be able to control it (even if their inability to stoke inflation for the past decade could lead sceptics to conclude otherwise), or even wish to. After all, they have craved inflation for over a decade and governments have been longing for it, too, as means of inflating away their ever-mounting debts.

“Yet this can be a slippery slope for everyone, as Jens O. Parsson makes clear in his analysis of the German and American inflationary periods of the 1920s and the 1960s and 1970s respectively, The Dying of Money:

‘Everyone loves an early inflation. The effects at the beginning of an inflation are all good. There is steepened money expansion, rising government spending, increased government budget deficits, booming stock markets and spectacular general prosperity, all in the midst of temporarily stable prices. Everyone benefits and no-one pays. That is the early part of the cycle.

‘In the later inflation, on the other hand, the effects are all bad. The government may steadily increase the money inflation, in order to stave off the later effects, but the later effects patiently wait. In the terminal inflation, there is faltering prosperity, tightness of money, falling stock markets, rising taxes, still lingering government deficits and still roaring money expansion, now accompanied by soaring prices and ineffectiveness of all traditional remedies. Everyone pays and no-one benefits. That is the cycle of every inflation.’

“Thankfully, not every inflation turns out this way (and in recent history very few have, with Zimbabwe and Argentina the most glaring examples), as Parsson acknowledges:

‘Inflations may be of every conceivable variety of degree, from the mildly annoying to the volcanic. Inflations may be fast or slow, accelerating or decelerating, chronic or transitory. A merely annoying inflation usually causes no one very much real harm. A volcanic inflation, on the other hand, is the kind of catastrophe that confiscates wealth, withholds the means of life, breeds revolutions, and precipitates wars. Every volcanic inflation of history began as a mildly annoying inflation. The true nature of any inflation is not often visible on its surface. As with volcanoes, an annoying inflation that is about to subside and die out looks on its surface like one that is about to erupt. It is the disquieting nature of an inflation that no one knows with certainty what it will do next.’

“Right now, markets are taking it for granted that any inflation will be modest and controlled, an annoyance at worst and a welcome change at best, a sign of economic momentum. It is to be hoped that they are correct but any uncertainty over inflation’s trajectory could nibble away at financial markets’ current confidence, or at least prompt investors to rethink the asset allocation strategies which have worked so well for them over the past decade and more.”