Why Intel’s profit warning may be important for UK investors

“Investors in technology stocks and equities more generally will have been pleased to see semiconductor makers get off to a good start in 2019, because firms like America’s Texas Instruments and France’s STMicroelectronics are a pretty good proxy for global growth (because silicon chips pretty much come with everything – but Intel’s overnight profit warning for the first quarter of 2019 casts a big cloud,” says Russ Mould, AJ Bell Investment Director.

“Intel is the world’s biggest silicon chip maker, thanks to its dominance in the field of microprocessors, the brains behind computers and servers, so if it is finding life tough then a whole host of important client, chip-consuming industries could be encountering a slowdown as well. Investors may also be well aware of how the chip stocks can be a pretty fair guide not just economic growth but risk appetite across stock markets, too – and where the S&P 500 goes the world tends to follow: 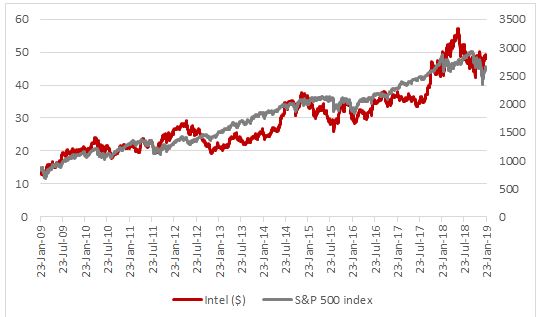 “Interim chief executive Robert Swan tried to encourage by saying that demand would pick up in the second half of 2019 after a near-term inventory correction. But experienced chip-industry watchers will remember that similar attempts to reassure came unstuck during the industry downturns of 2000-2002 and 2007-2009 and the truth is that this cyclical, capital intensive industry often has relatively limited forward visibility – as evidenced by Intel’s need to guide down forecasts quite substantially for Q1 2019.

“Intel blamed a slowdown in its smartphone modem business and this should be less of a surprise, given Apple’s profit warning at the start of the month.

“Of greater concern may be Intel’s warning of softness in its server and cloud businesses. Mr Swan noted that providers of cloud-based services – which could include anyone from streaming and downloading services to meal-kit delivery firms to alternative transport service providers and online retail giants – are still absorbing the capacity they built earlier in 2018.

“This is not to suggest we should hit the panic button and expect profit warnings from Amazon or other internet giants. But it might suggest that loss-making online upstarts – which takes in most meal-kit delivery firms or even new online food delivery platforms – are having to be careful with the pennies as the red ink keeps flowing, capital markets prove a little less accommodating and the ‘build-and-they-will-come’ strategy has yet to accrue sufficient customers – or generate enough cash – to pay its way.

“And this is when the US and global economy is still growing nicely, so no wonder central banks are already on the back foot when it comes to their plans to tighten monetary policy.

“Two UK companies which sell precision tools into the semiconductor industry are Renishaw and Spectris, both best-of-British electrical and electronic engineers.

“Their share prices seem unconcerned by Intel’s alert, ignoring its 6% after-hours stock market plunge in favour of the 6% gain recorded by the Philadelphia Semiconductor Index, or SOX, during US trading on Thursday.

“This makes sense in some ways as the semiconductor industry is just one customer but the long-term relationship between Intel’s stock price and theirs may be something that shareholders should bear in mind, whether Mr Swan is correct in his view that the Q1 warning is just a blip or not.” 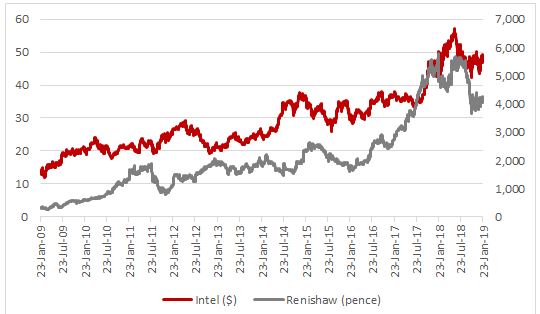