“Since 1970, the oil price has doubled year-on-year six times and on four of those occasions the US and UK have gone into recession within the next two years. Everyone is waiting nervously to see if 2021 makes it five out of six,” says AJ Bell Investment Director Russ Mould. “Higher energy costs feed inflation, act as a tax on consumers and can pressure corporate margins too. Central banks may be wringing their hands as they admit they cannot do much about the inflation oil is spreading right now but Governments can, by permitting and encouraging more oil drilling and the construction of more pipelines.

“A weaker oil price would presumably make it harder for Vladimir Putin to fund his war in Ukraine, as well, so increased oil supply could bring economic and geopolitical benefits (even if it would take time to effect). Environmental campaigners would be understandably up in arms about such a policy shift but as the American economist and historian Thomas Sowell noted, ‘There are no solutions, only trade-offs.’

“The technical definition of a recession is two consecutive quarters of negative GDP growth, on a quarter-on-quarter basis. Oil doubled in price, year-on-year, in 1973, 1979, 1990, 1999 and 2008 and on four of those occasions the US and UK went into recession shortly after.

“The only exception was 1999. Even then US growth wobbled and stock markets crumbled as the technology, media and telecoms bubble popped when confronted by tighter Federal Reserve monetary policy, which was designed to rein in inflation. 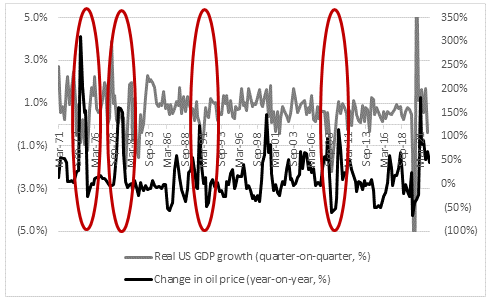 “No wonder central bankers, policymakers and investors are so concerned, especially as there are some unpleasant parallels with 1974, 1979 and 1990 in particular. The Yom Kippur war of 1973, Iranian Revolution of 1979 and Iraqi invasion of Kuwait in 1990 all prompted oil shocks of varying degrees and duration, owing not just to the immediate effects of the conflict but sometimes the geopolitical actions which followed thereafter, thanks to sanctions or at least freezes in international relations. 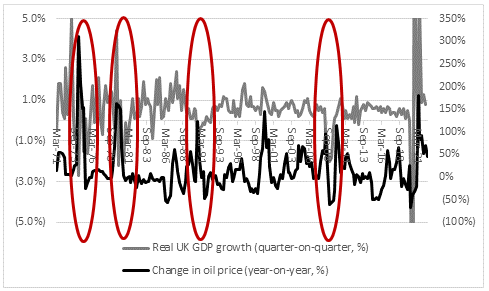 “Whether 2022 mirrors these events, in the wake of the Russian attack on Ukraine and Western imposition of sanctions on Moscow remains to be seen, but these developments may well be adding strains which were already evident in the oil market, thanks to public and political pressure to move away from hydrocarbon production.

“Already frightened by the price collapses of 2015-16 and 2021, oil producers have obliged by cutting capital investment and it may yet be that Government windfall taxes (threatened or applied) further deter long-term investment in oil and gas at a time when the global economy still need them, whether we like it or not, as the transition to more renewable sources takes time to implement.

“A sustained period of high oil prices could weigh upon global growth once more. At least oil prices retreated sharply once those recessions hit in the 1970s, 1980s, 1990s and early 2000s and that took some of the heat out of inflation. If we get a repeat of that this time around then that might give central bankers, consumers and companies some succour on the corporate front, although whether policy makers have the stomach, or whether it is really desirable, to let a recession cool the price of oil is open to question, given how the globe’s huge debts leave it ill-placed to weather a deep downturn.”