“Although financial markets are breathing a sigh of relief that the US Federal Reserve now seems less aggressive on interest rates, after nine increases since late 2015, they may be less pleased with chair Jay Powell’s comments in Washington yesterday that it is still the plan to make the central bank’s balance sheet ‘substantially smaller’ over time,” says Russ Mould, AJ Bell Investment Director.

“This means that the Fed will continue to tighten monetary policy and drain away some of the cheap money which, it could be argued, has done so much to fuel prices across shares, bonds and a range of other asset classes over the last decade. 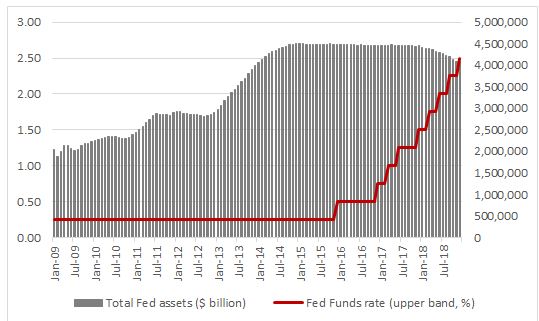 “The drop so far in the Fed’s balance sheet may not look dramatic but under Janet Yellen and now Jay Powell it has shrunk by $460 billion, or around 10% from its peak as the Fed declines to reinvest all of its bond portfolio as its holdings mature at a rate of up to $50 billion a month.

“The lower availability of cheap cash could have an impact on stock markets. The experiences of all three phases of Quantitative Easing in the USA, launched in December 2008, November 2010 and September 2012, suggest that increases in Fed assets helped asset prices while lulls in Fed activity did not. 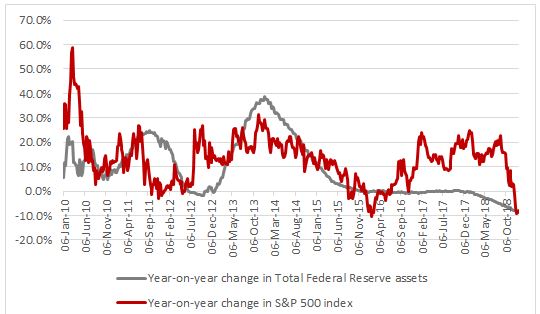 “The notable exception to this trend is the period from 2015 onwards. The Fed stopped adding to QE in October 2014 after a period of ‘tapering’ its monthly stimulus, yet the S&P 500 continued to barrel higher.

“However, the Bank of Japan and then the European Central Banks launched their own QE schemes in April 2013 and March 2015, to provide more liquidity and take up the slack.

“This is why the Fed’s determination to press ahead with Quantitative Tightening (QT) is so important now. The ECB stopped adding to QE in December and even the BoJ seems to be having second thoughts, as it is undershooting its annual ¥80 trillion (£575 billion) target (either that or it is running out of things to buy).

“With the Bank of England also on hold and the Swiss National Bank not really big enough to move the dial, the Big Five proponents of QE will, in aggregate, start to see their balance sheets shrink in 2019.

“While it is understandable that markets will continue to focus on interest rates, it may be QT in the USA, and the absence of further QE in the EU and UK, that really sets the tone for stocks on a top-down basis and corporate earnings will need to be strong and take up the slack if markets are to regain the momentum they had in early 2018. 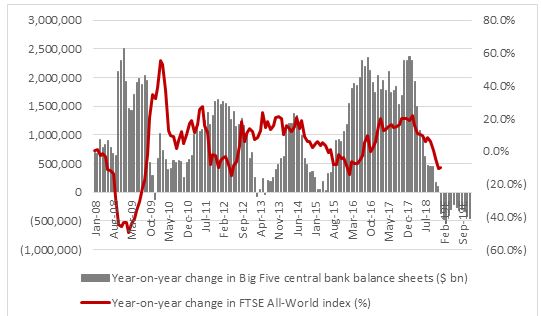