Why rising global bond yields could be bad for share prices

“As the UK ten-year Gilt yield reaches 0.75%, the UK’s borrowing costs look like they are about to break a 25-year downtrend at a particularly inconvenient time, something that will have Boris Johnson and Rishi Sunak a little on edge,” says Russ Mould, AJ Bell Investment Director. “But investors in financial markets will be concerned too, and not just in the UK as rising bond yields and borrowing costs could have negative implications for share prices in three ways. 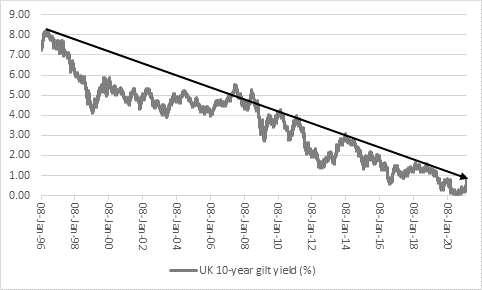 “First, rising yields on bonds may mean that fixed-income offers a more attractive alternative to income-seekers, who switch their asset allocation from equities to bonds.

“Finally, rising bond yields could nudge up the discount rate that analysts use in their discounted cashflow models (DCFs). The higher the rate at which future cashflows are discounted back to their net present value (NPV), the lower the value of the equity. This is a particularly acute issue for companies whose best years are expected to be well ahead of them, when investment now pays off in booming profits and cashflow in the future – such as technology stocks, biotech stocks and concept stocks like space exploration and space travel companies.

“Nor is the phenomenon of rising bond yields confined to the UK. Indeed, some countries are not waiting for investors to push them around and are getting on with the job of raising interest rates themselves.

“Zambia, Venezuela, Kyrgyzstan, Tajikistan, Armenia and Mozambique have all raised interest rates in 2021, to take the total to six rate hikes from central banks this year against three cuts. It is early days but that is a subtle shift in momentum from 2020 when it was one-way traffic in terms of cuts. 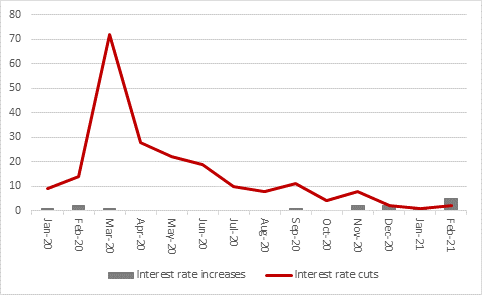 “Many investors will not care less about what happens in these frontier markets, but they may need to pay attention for three reasons.

•    It could be an early “risk-off” sign in financial markets. When investors become incrementally more cautious, they tend to cut their riskiest positions first. Frontier markets such as these, or even more generally, would fit that bill. Their central banks may be raising rates to try and lure capital back or at least reaffirm their credibility with overseas lenders.

The benchmark ten-year bonds of key emerging markets do suggest that investors are taking risk off the table. Yields are creeping up and prices creeping down as investors sell. The yield on ten-year Russian paper has jumped to 6.75% from 6.28% in the last month alone. 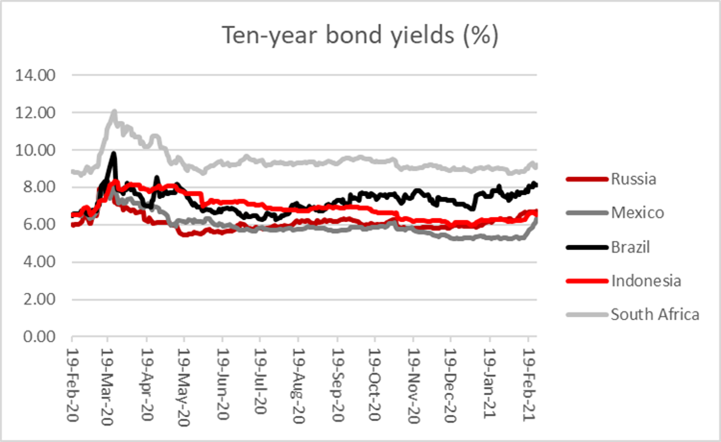 •    It could be a sign that markets are, at the periphery, starting to deleverage or at least balk at the tidal wave of debt that continues to build – Bloomberg data shows that the total of global bonds in issue now stands at a record-high $67.6 trillion. And generally speaking, when markets turn cautious, it is the peripheral markets that show distress first, rather than the core ones, as it is in the latter that the bulls always have the greatest faith and thus where they make their final stand before they capitulate and make way for the bears.

A look at developed market bonds suggests concerns over gathering debt, and not just in the UK ahead of next week’s Budget. In Europe, for example, benchmark ten-year bond yields are creeping higher, despite the European Central Bank’s Quantitative Easing (QE) scheme.

This is understandable on the context of the latest Global Debt Monitor from the Institute of International Finance which reveals that the world’s debt pile soared by $24 trillion to a record $281 trillion in 2020. That was an extra 35 percentage points of GDP to take the debt/GDP ratio to 355%. The Global Financial Crisis started in 2008 when the global debt was ‘just’ $187 trillion, so global borrowings have mushroomed by 50% since then. 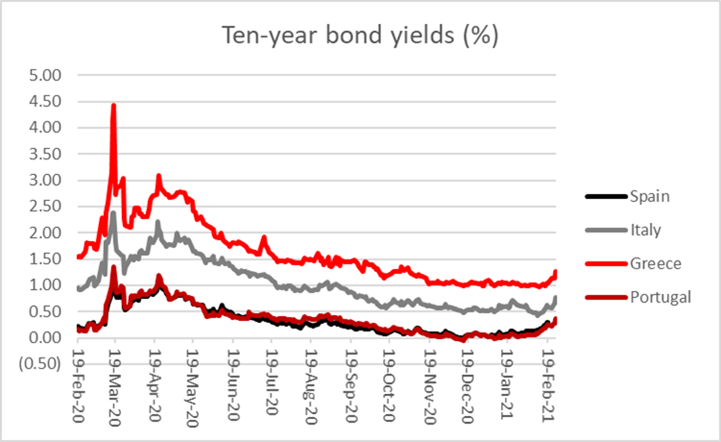 •    It could be a sign that inflationary worries are seeping into Government bond markets the world over. Bloomberg research reveals that the value of global bonds with negative yields has dropped by $3 trillion this year so far, although that still leaves a total of some $14 trillion.

Even the yield on ten-year Japanese Government Bonds (JGBs) stands at 0.10%, above the top of the Bank of Japan’s target range and no different from January 2016. Perhaps even loyal holders of JGBs are contemplating the return of inflation after 30 years. 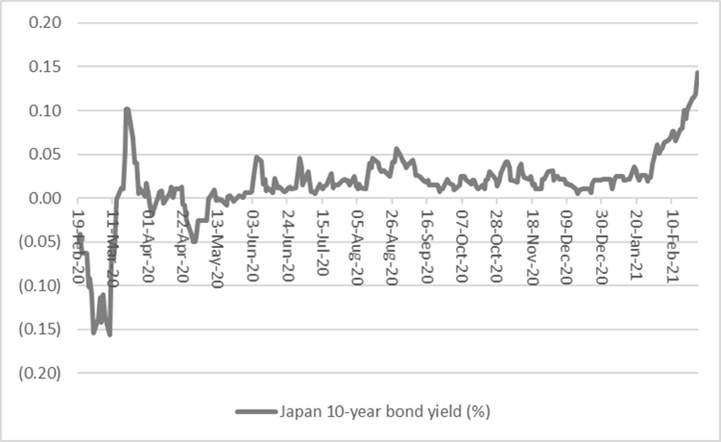 “None of these things may come to pass. It could be that the deflationary force of interest payments, demographic trends and central bank intervention keep fixed-income investors in clover as they combine to keep interest rates and inflation well and truly anchored, to the benefit of the bond portion of any portfolio, especially the long-duration segment. Stock markets could also take the view that rising bond yields are a sign that the economy is bouncing back and that corporate earnings are going to rise rapidly.

“Yet if any of the above three trends keep running, then the meagre coupons offered by most fixed-instruments would leave them looking like return-free risk and speak in favour of short-duration exposure for anyone seeking bond-like ballast in their asset allocation plan.

“Central banks may – eventually - feel obliged to raise rates to curb inflation, if it really does run hot, assuming that bond yields have not already soared to do the job for them. But there could be a tipping point for bond yields or headline interest rates whereby they do weight heavily, simply because the world is so much more indebted – and at some stage that tipping point could hit both economic growth and financial asset prices.

“In this context, China is an interesting test case. 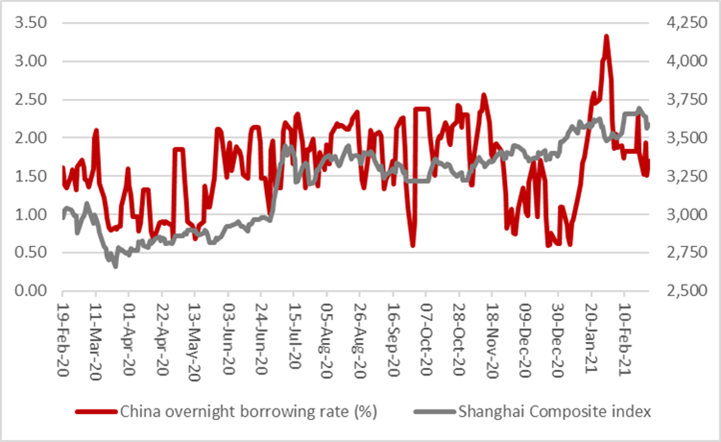 “The People’s Bank of China jacked up overnight borrowing costs in late January but quickly backed off as the Shanghai Composite index wobbled. As soon as policy was eased, share prices rose. The monetary authorities have a delicate balancing act ahead of them in Beijing – as well as Washington, London, Frankfurt, Tokyo and beyond.”