“Technology stocks, perceived future disruptors, cryptocurrencies and meme stocks are all a taking a bit of a hammering but the old economy seems to be alive and well, judging by how Royal Dutch Shell is once again the largest company in the FTSE 100 by market cap,” says AJ Bell Investment Director Russ Mould. “It may not be what environmental campaigners, politicians or the wider public want to hear, but oil prices are firm as energy demand rises and – for the moment at least – renewable and alternative forms of power are unable to take up the baseload slack.

Source: Refinitiv data. *Based on available float to trade on London Stock Exchange only.

“Unilever and AstraZeneca have both enjoyed top spot in the FTSE 100, based on market capitalisation, over the past 12 months but Shell is back on top again, buoyed by higher oil prices, which have recovered more strongly than anyone could have imagined after their pandemic-induced collapse in March 2020. 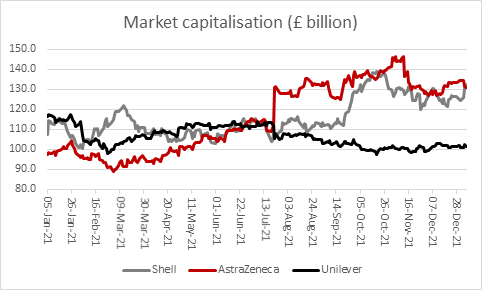 “Oil is being supported by the combination of an economic recovery, hopes that the Omicron variant will not prove as dangerous as some of its predecessors, supply-side discipline at OPEC+ and public and political pressure not to drill for fresh finds of hydrocarbons. While this will surely bring long-term ecological, social and economic benefits, the short-term results could be higher energy prices if demand keeps growing and supply remains constrained.

“For now, markets seem to believe that oil’s renaissance is temporary.

“The FTSE All-Share Oil & Gas producers sector represents just 8% of the FTSE All-Share’s total £2.5 trillion market capitalisation (and the vast bulk of that 8% comes from Shell and BP). 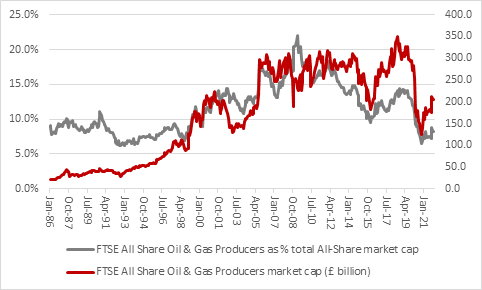 “That compares to the all-time high of 22% (in March 2009) when oil was just $45 a barrel and the market was just bottoming after the utter collapse of the previously dominant financial stocks. 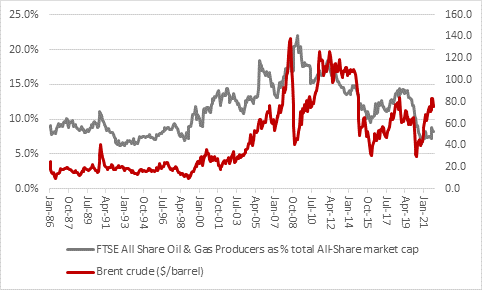 “On that basis, either markets are right in that oil prices are going to fizzle out as fields packed with hydrocarbons prove to be stranded assets and the world switches to new sources of power or investors are dead wrong on oil stocks and they are still too cheap.

“The disparity between oil prices and the relative valuation of oil stocks is even more glaring on a global basis. 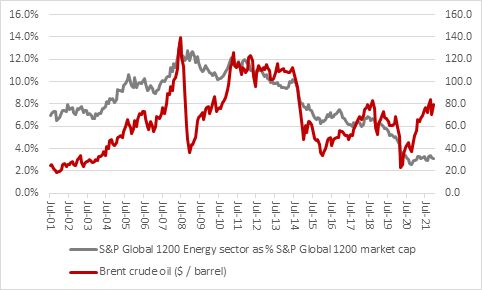 “If oil prices surprise by staying firm – or even going higher – it will be interesting to see if any investors decide to put aside their environmental, social and governance (ESG) principles in favour of profit.”