“The disappointing quarterly results and gloomy outlook statements from giant US retailers Wal-Mart and Target are bad news for three reasons,” says AJ Bell Investment Director Russ Mould. “First, the retailers are not yet passing on all the input costs they are facing, so in inflation could get worst before it gets better if they try to do so. Second, if they don’t try, operating margins will come under pressure and if margins crack then so do earnings and that’s not good at a time when investors are still paying lofty valuation for peak profits and near-peak margins across the US stock market overall. And, finally, the balance sheets at both Wal-Mart and Target are showing growth in inventory that is massively outstripping growth in sales. That suggests they have too much stock on the shelves and unless those goods shift quickly then the retailers will have to cut back on orders and that in turn will weigh on the economy.

“In sum, there’s trouble ahead and the news on inventory may be the most worrying of all, because everyone from Jay Powell and Janet Yellen down is still trying to convince themselves that the US consumer is in good shape. A surge in unsold goods would suggest that either Wal-Mart and Target have got carried away and over-ordered or consumers are starting to buy less stuff as they feel the squeeze from inflation, or perhaps somewhere in between.

“Whatever the explanation the figures are startling and do not look good.

“In its fiscal first quarter to the end of April, Target’s sales grew by 4%, or $951 million, year-on-year. The balance sheet shows that inventory rose by 43% or $4.5 billion. 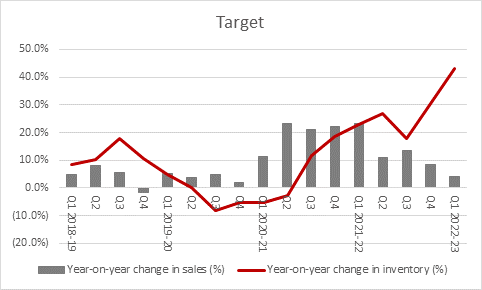 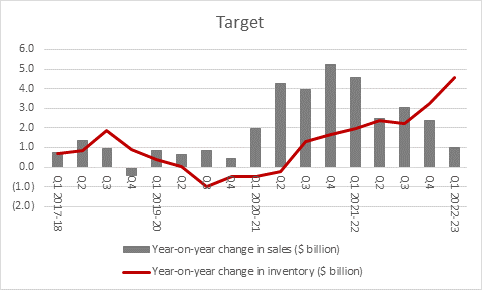 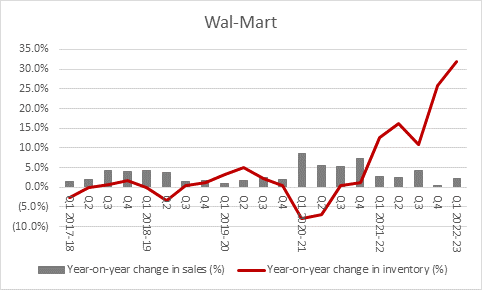 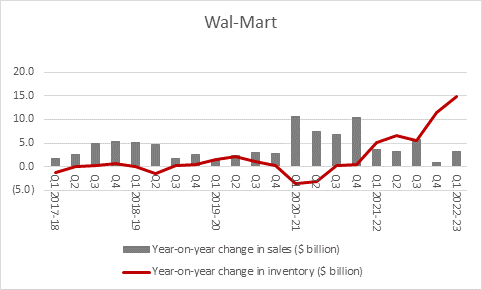 “Inventory tends to build as demand slows down, so the retailers, their shareholders and investors in US equities more generally will be hoping that bulge in unsold goods starts to decline pretty quickly. Private consumption generates about 70% of US GDP so a slowdown here, either a temporary one as retailers whittle down their stocks or a longer one of consumers slow down their spending, could be a major blow to the US economy and the earnings power of corporate America.

“It is here that the wider danger for American equities lies.

“Investors may be tempted to make the case that US stocks now offer value after their sharp declines – the S&P 500 index is now more than 20% off its highs, so the price (the p) in the price/earnings (PE) ratio is also down by more than a fifth.

“Based on earnings estimates collated by Standard & Poor’s, that implies US equities trade on around 18 times forward earnings for 2022 and 16 times for 2023, figures which are around historic norms and nothing like the more challenging mid-twenties multiples that characterised the S&P 500. 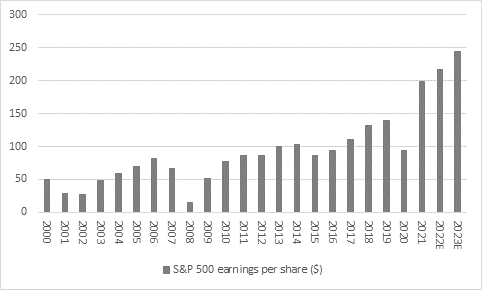 “But that assumes the earnings forecasts are accurate and the upsets from Wal-Mart and Target show the potential downside risks, even if consumer discretionary stocks represent barely 8% of aggregate S&P 500 earnings, compared to the real heavyweights that are technology at 21%, healthcare at 17% and financials at 15%.

“US corporate earnings are forecast to set new record highs in 2022 and 2023 but investors are relying on that just so US equities look relatively normally valued, not even cheap. If earnings disappoint then US stocks may end up looking less attractive, unless the Federal Reserve or Congress, or both, lose their nerve and turn on the monetary and fiscal taps again.”