“There can’t be a person on earth who doesn’t want Elon Musk to succeed in its quest to drive the internal combustion engine out of business (apart from maybe a few oil executives and some hedge fund managers who are short of Tesla stock) but he isn’t helping himself when it comes to persuading investors to keep the faith,” says Russ Mould, AJ Bell Investment Director. “Today’s profit warning from Tesla comes hot on the heels of a disappointing fourth-quarter sales update at the end of the month and will confirm the suspicions of some that the bumper third-quarter operating profit of $417 million was just too good to be true.

“Mr Musk now seems to be battening down the hatches a bit, given the announcement of a plan to cut staffing levels at Tesla by 7% - and that comes in the same week as a planned 10% headcount reduction at Space X for good measure, to cap a difficult week for the entrepreneur.

“The good news at least is that Tesla still expects to make a profit, albeit a small one, in the first quarter of 2019, and this does not appear to be enough for some, given the company’s monster, $50-billion-plus market valuation. The shares are down sharply today and now lie below the $342 mark at which they stood on 6 August 2018, the day before Mr Musk floated the idea of taking the company private at $420 per share.

“Sceptics will simply assert that this is just more evidence that the Tesla numbers don’t add up. The third-quarter figure looked suspicious to some, simply because it looked so good, relative to what had gone on before it. 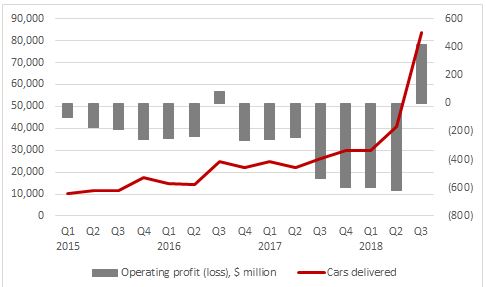 “This is all well and good but just as sales were ballooning, costs collapsed. Operating expenses  - research and development, sales and marketing and so on – fell from $1,241 million in the second quarter to $1,107 million in the third, which looks odd for a manufacturer when volumes are rising so sharply. You would expect them to fall as a percentage of sales thanks to operational gearing, but not in absolute terms. 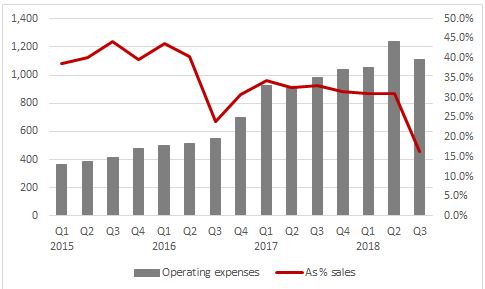 “This suggests that Mr Musk pulled out all of the stops to deliver the third-quarter profit that he had promised to thwart what he called the short-termism of the hedge funds who were short-selling his company’s shares, betting that the share price would fall.

“This is not to accuse Mr Musk or his finance team of any wrong-doing.

“But it does suggest that they had become fixated on short-term car production and profit goals, and were trying to manage the share price as much as they were the company’s assets – which is ironic, as it means they had become guilty of what they claimed they detested (short-termism).

“The result is a performance that was going to be hard to sustain, given the planned production ramp-up and the costs associated with that, and so it has proved.

“If anything Tesla’s shareholders are taking a very long-term view. Why else would they attribute a $50-billion-plus market value to a firm that is barely profitable, has a tiny share of the global car market and faces competition in the electric vehicle market from established players in Germany and Japan, as well as a legion of newbies in China?

“Truth be told, Mr Musk has probably lost this round of the fight with the short-sellers, given the profit warning and the headcount reductions – and real growth companies grow staffing numbers, not cut them. It is now up to Mr Musk and his team to prove the company’s long-term virtues by growing production, building profits, eliminating cash burn and eventually starting to generate cash.

“Such a virtuous cycle would help to justify the company’s valuation and potentially persuade the short-sellers to go away.

“But raising hopes one quarter only to dash them the next will only service to encourage the sceptics to keep on betting that Tesla’s shares will fall.”