“Vaccination programmes, fresh fiscal stimulus and ongoing monetary stimulus from central banks are all fuelling hopes for a strong bounce back in economic output and corporate profits, but this means investors are potentially more exposed now to unexpected shocks – and Turkey could yet provide one,” says AJ Bell Investment Director Russ Mould. “After all, the old saying goes that ‘markets like to climb a wall of worry but then slide down the slope of hope,’ and one thing that could be capable of knocking markets off their stride (beyond a resurgence of the virus) is an old-fashioned emerging markets wobble. After all, it was a currency crisis in Asia and then Russia that unexpectedly knocked global markets off their stride in 1997-98.

“As President Recep Tayyip Erdoğan sacks a third central bank governor for the third time in three years, as Naci Ağbal follows Murat Uysal (2020) and Murat Çetinkaya (2019) out of the door, the Turkish lira is on the slide and Ankara is facing questions over whether another economic crisis is coming around the corner. 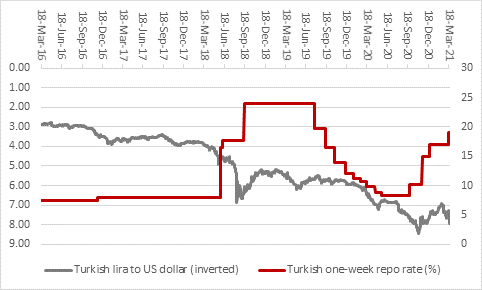 “The lira is yet to give up all of the ground it regained under Mr Ağbal, whose orthodox policy of hiking interest rates to support the currency and keep inflation and the economy in check ultimately brought him into conflict with the President.

“Nor is Turkey’s debt burden excessive, judging by a debt-to-GDP ratio of barely 40%, based on the Bank of International Settlements’ (BIS) latest estimate of the national debt at $276 billion, including financial and non-financial corporate debt (the UK, USA, EU and Japan would dream of having such a low figure).

“The problem is that around half of that figure is funded by overseas lenders in overseas currencies. If that money goes elsewhere, then Turkey could find itself short of liquidity, and if the lira goes through the floor then funding those overseas debts becomes much more expensive overnight. The increased interest bills, in lira terms, will then suck cash out of the Turkish economy.

“And markets are clearly far from convinced that Turkey is on the right track. The Turkish lira has lost dropped by around 9% against the dollar in early trading today and has halved in the past three years, weighed down by the dreaded combination of substantial current account and budget deficits, which leaves the country exposed to fickle international money flows.

“Mr Uysal attempted to keep markets onside and tempt money back with interest rate hikes and that got him the sack. The same fate appears to have befallen Mr Ağbal for the same reason.

“Thankfully the situation is not yet comparable with 2018 when the European Central Bank even warned about the potential risk to those banks which had exposure to the country and the danger that Turkey’s woes could lead to ripple effects throughout the financial system. “Europe’s lenders have cut their loan books to Turkey since 2018 and HSBC has even contemplated withdrawing altogether.

“Even so, Spanish, Italian, French and German banks have exposure to Turkey of around $118 billion, according to last autumn’s data from the BIS, with UK banks (mainly HSBC) exposed for another $10 billion or so.

“For the moment, the European banking sector is not looking too troubled, at least by Turkey, as markets look for improved growth, lower loan losses and steeper yield curves to fatten their profits and increase their ability to pay dividends. 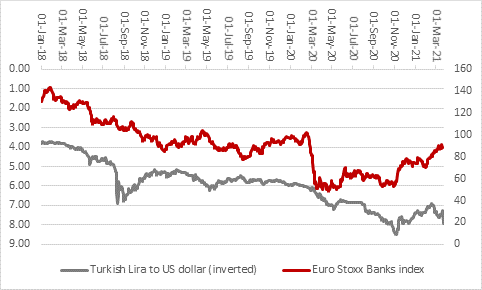 “Nor do emerging markets seem unduly flustered, even if they have lost a little momentum of late. 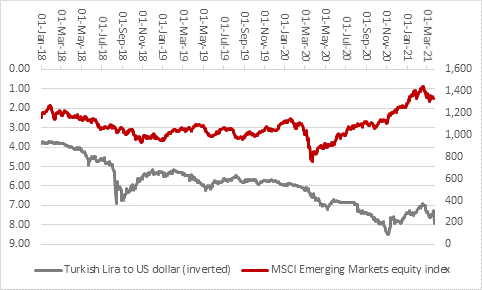 “Yet investors must now wait to see what policies are implemented by Mr Ağbal’s successor at Turkey’s central bank. Raising interest rates does not seem to be an option so that leaves four possible courses of action:

•    Turkey could devalue the lira (though the markets seem to be doing that for it anyway). This could help to ease the pressure on interest rates and reduce debt-servicing costs bills on lira-priced loans while also slowing imports and boosting exports to cut the current account deficit (though it would make servicing overseas debt more expensive).

•    Ankara could cut spending or increase taxes. President Erdoğan first came to power (as Prime Minister) in 2002 thanks to his protests against the austerity package demanded by the International Monetary Fund (IMF) in return for help after the 2000-01 crisis. Such a policy therefore seems unlikely.

•    Turkey could default. This is possible, especially as Mr Erdoğan has in the past called interest rates ‘the mother of all evil,’ although it could leave Turkey locked out of international markets for some time and thus store up more problems for the future.

•    Ankara could impose capital controls. This would stop foreign banks and businesses from withdrawing their cash although it may only stop the rot in the lira for as long as the controls are in place.

“Global financial markets would not welcome either of the last two options, unlikely as they seem.

“Malaysia imposed capital controls in 1998 and international investors who were stuck with assets stranded in ringgit sold stocks and bonds in other emerging markets to raise liquidity and protect themselves from the danger of similar moves elsewhere. That eventually rippled around the world and what began as an Asia currency and debt crisis in 1997 became a global one in 1998 and even the FTSE 100 was caught up the melee as it briefly entered a bear market.

“None of this is to say that markets will get a repeat this time, or that Ankara makes the same mistakes as Kuala Lumpur did 22 years ago. But it is a risk that must be watched, especially as markets are at their most vulnerable when they are at their most optimistic.”