“Since allegations of the theft of its intellectual property by a Chinese rival lie right at the heart of the trade dispute between Washington and Beijing this Wednesday’s results from American silicon chip maker Micron should be particularly informative, especially as semiconductor sales tie closely into the global economy as well,” says Russ Mould, AJ Bell Investment Director. “Thursday’s results from Broadcom, another silicon chip play whose revenues come from wireless and fixed line telecoms, broadband and industrial clients, may also give investors and economists a good read on the current state of the global economy – and the impact that American and Chinese tariffs may be having.

“Both Micron and Broadcom are members of the SOX, or Philadelphia Stock Exchange Semiconductor index, which has traditionally been a good indicator of wider stock market momentum and risk appetite since its launch in summer 1994.

“This is because silicon chips – semiconductors – are everywhere, from cars to computers, video games to robotics, display screens to data centres, as well as smartphones and tablets. As such they are good proxy for economic growth and broader end-market demand.

“The SOX gained 36% between January and its May peak, which was a new all-time high, only for renewed jitters over Trump, trade and tariffs – and some poor earnings numbers from firms like Microchip – to knock it back by some 20%. The index rallied on Friday as it welcomed the agreement between the US and Mexico over immigration but America’s relationship with China remains fractious and Micron is right at the heart of that. 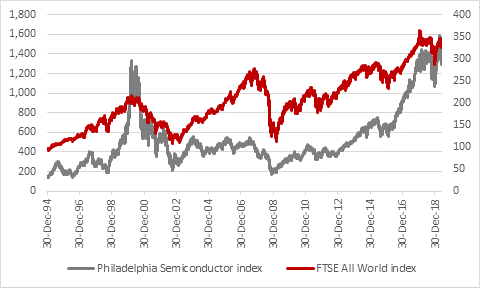 “Hindered by a big ramp-up in supply for memory chips and slower sales of smartphones and computers, Micron has seen sales and profits drop sharply. Management guided to a third-straight sequential drop in both and analysts are already forecasting a fourth straight drop in earnings per share (EPS) for the quarter just begun. 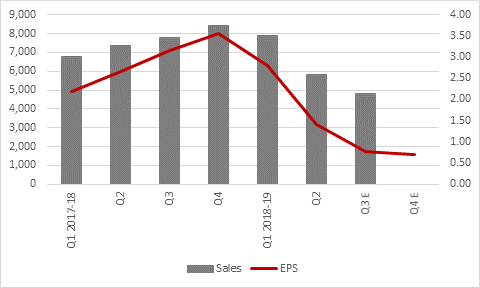 “It is the guidance that may be more important than the results and the balance sheet could be telling here. Even as sales have dropped by 30% in the last two quarters, inventory has risen by 22% and if that continues Micron may have to slow down wafer starts or idle output to stop that build-up, with the inevitable hit to margins and profits

“The last big bulge in inventories three years ago hit profits hard and Micron fell into loss. Pricing for both DRAM and flash chips was weak last quarter (down 21% and 26% respectively) and any signs of an industry-wide supply glut could further hit selling prices for these commodity products.” 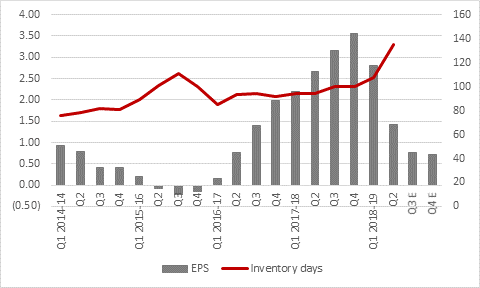