“Back in 2013, the Texas-based founder and manager of the Hayman Capital hedge fund, Kyle Bass, gave an interview in which he tersely stated, ‘I would buy gold in yen and go to sleep for ten years.’ That thesis is starting to play out quite spectacularly and Western central bankers, economists and investors need to pay attention,” says AJ Bell Investment Director Russ Mould. “The Bank of Japan, and the yen, may be test cases for the view that central banks are in a corner of their own making after over a decade of experimental policy: either tighten to tackle inflation only for indebted economies and leveraged financial markets turn turtle, or do nothing and see inflation do the damage instead.”

“No wonder gold bugs are waiting in the wings, even if Mr Bass’ theory is taking a long time to play out. Gold did nothing in yen for six years, but it has since advanced by 70% in the next three (or, in other words, the yen has lost 70% of its value relative to gold over that time frame).” 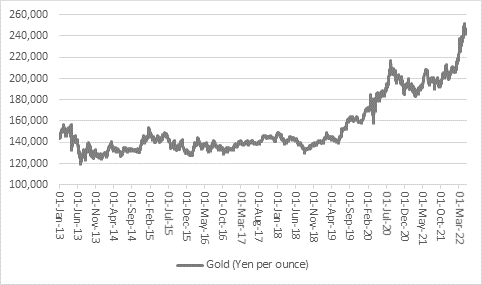 “The case for short yen/long gold as based upon tattered state of Japan’s public finances, the country’s weak demographics and how the Bank of Japan had got itself into trap whereby any attempt to tighten monetary policy would only lead to an economic slowdown and – in turn – lower interest rates and more money creation via Quantitative Easing.

“This is the very issue that is nagging away right now at the US Federal Reserve and the Bank of England after their latest interest rate rises.

“Both Federal Reserve chair Jay Powell and Bank of England Governor Andrew Bailey accompanied policy tightening with less aggressive language than expected, as both try to balance fighting inflation on one hand with not tipping their respective economies into a slowdown or even a recession on the other.

“Government bond yields are rising faster than headline interest rates in both the US and UK. That may serve one purpose, by doing the monetary authorities’ job for them, but they will not want to see bond yields gallop too far, as the higher borrowing costs they entail could put a crimp on economic activity (and also prompt a shift in sentiment in stock markets for good measure, if bond yields start to look attractive relative to those on offer from equities).

“What is intriguing about Japan right now is how Japanese Government Bond (JGB) bond yields are rising but the yen is still falling. The Japanese currency stands at almost ¥131 to the dollar, a mark last seen in 2002. 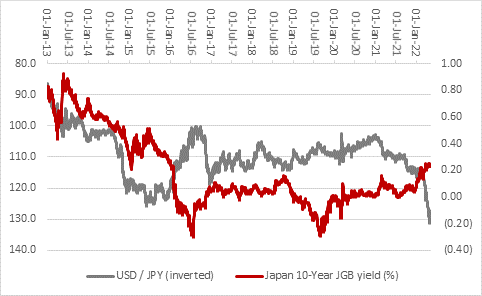 “Normally, higher yields would attract more capital. But JGB yields are rising much more slowly than they are in the USA, where the US Federal Reserve is talking a much tougher game. As a result, the dollar is attracting capital at the yen’s expense. 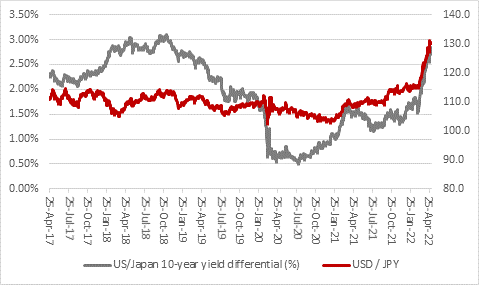 “Markets pricing in an 80% chance of a 3% Fed Funds rate by the end of 2022, compared to the current rate of 1%. The prospect of a second American attempt at Quantitative Tightening (QT) and a withdrawal of Quantitative Easing is also upon us, as from 1 June the American central bank starts to withdraw that stimulus at the rate of $47.5 billion a month, a figure which rises to $95 billion by the autumn.

“This is in response to inflation reaching its highest level in the USA since 1981.

“In Tokyo, inflation may stand at a 42-month high, but the headline rate is still only 1.2%, below both the BoJ’s 2.0% target and miles below the prevailing headline rate in America.

“As a result, Bank of Japan Governor Haruhiko Kuroda seems in no rush to raise the headline base rate from minus 0.1% and remains committed to a policy of Qualitative and Quantitative Easing (QQE) with Yield Curve Control (YCC), whereby it will permit 10-year JGB yields to move up or down by 25 basis points (0.25%) from its 0% target.

“The result is that the Bank of Japan, after multiple rounds of QE and QQE, as well as decade of zero interest rates, and a few years of YCC, has a balance sheet that exceeds 100% of GDP (compared to 30%-40% in the USA and UK).

“But despite all of that effort, inflation is stubbornly below target and, worse, the 10-year JGB yield is approaching 0.25%, to perhaps set the BoJ and bond market vigilantes on a collision course. 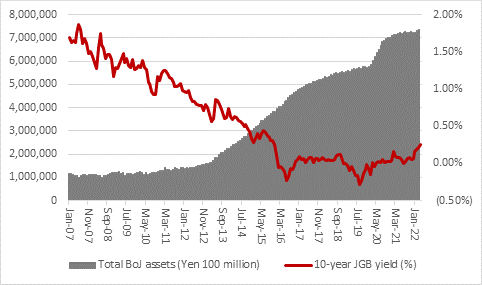 “This potential contest is one that all Western central banks will be watching. The BoJ is yet to pull the trigger on rate rises or Quantitative Tightening and already the bond market is moving ahead of it, amid fears of inflation.

“The currency market is perhaps taking the view any tightening of policy will not last long, in keeping with multiple prior attempts in Japan (and America’s relatively modest progress between 2017-19), as the Japanese economy slows and financial markets wobble, to force a rapid backtracking on QT and interest rates. Any shift to cut rates and return to QE would potentially play to gold bugs’ view that a store of value is needed as central bank policies result in the ongoing debasement of fiat currency.”