“As the central bank calibrates policy, pulling on levers such as interest rates and its unorthodox Quantitative Easing programmes, it is logical to assume that the US Federal Reserve is the lord of all of that it surveys. After all, one goal of record-low interest rates and QE was to inflate asset prices in an attempt to create a wealth effect and it has certainly succeeded here, at least with regard to the first half of that mission, with the S&P 500 and Dow Jones Industrials stock averages sitting less than 5% from last year’s all-time highs,” says Russ Mould, AJ Bell investment director.

“But while the Fed has had success – in some eyes at least – with low rates and QE it is encountering greater difficulty in extricating itself from these supposedly temporary measures and taking monetary policy back to more ‘normal’ paths.

“After a gradual series of nine interest rate rises over a three-year span from December 2015 and a 12%, $530 billion shrinkage in its balance sheet the Fed has started to backtrack, putting rates on hold and hinting that may end Quantitative Tightening this year.

“The Fed has cited economic concerns – but with unemployment near 50-year lows, wage growth humming along above 3% and President Trump proclaiming an economic miracle in his State of the Union speech many will wonder why it is so concerned.

“Perhaps the Fed has therefore been shunted around by the financial markets which protested about the withdrawal of cheap and plentiful cash. Share and bond prices wobbled badly in late 2018 – even though US interest rates reached just 2.5% compared to the 2006 peak of 5.25% and QE swelled the Fed’s balance sheet by $3.5 trillion or 350% - and it seems as if chair Jay Powell and his colleagues are backing off as a result.

“One reason may be the swoon in US consumer confidence which accompanied last year’s stock market dip.

“Consumer confidence, as measured by the Conference Board, has soared alongside the S&P 500 since the end of the Great Financial Crisis in 2009 – something which says the Fed’s asset-price-promotion and wealth-creation policies have worked. 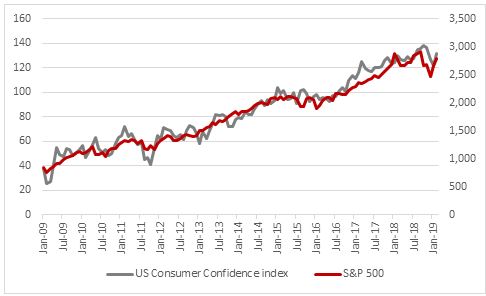 “But as soon as the Fed tried to tighten policy, the US stock market wobbled and seemed to take consumer confidence with it, as even the FAANG companies tumbled briefly into bear market territory, with a drop in their aggregate market value that exceeded 20%. 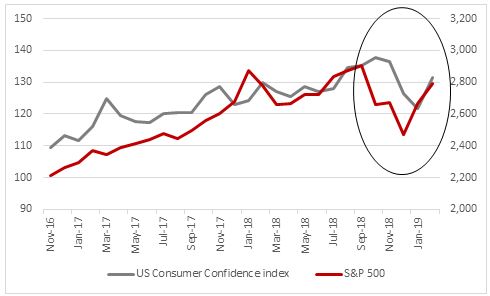 Source: Conference Board, Refinitiv data. Data covers the period of the Trump Presidency.

“Equally, stock prices – and consumer confidence – have surged again now that the Fed has begun to adopt a softer line.

“This therefore begs the question of who is in charge of whom? Is the Fed able to bend the markets to its will – even if Jay Powell has said on several occasions that it was not the central bank’s job to stop people losing money on their investments – or are asset prices simply too integral to the US economy, thanks to the Fed’s wealth-creation plan, meaning that the markets are dictating policy to the Fed?

“We may well find out in the coming months but the launch of QE-II, Operation Twist and QE-III after stock market slides under the Ben Bernanke-led Federal Reserve would suggest the central bank is paying acute attention to stock prices, despite denials to the contrary.

“The danger then is that a pause in the tightening of policy – or even a reversal – causes stock markets and other asset prices to start melting up once more, ironically in the wake of the Fed’s move to stop a meltdown.

“This is a wretched position for Mr Powell to inherit but it shows that even the US central bank is still finding out what may be the possible unintended consequences of a decade’s worth of unintended policy.”