“It is not just shoppers, parents and carers who will be looking nervously at the price of food, amid shortages of truckers, container ships and carbon dioxide – investors and central bankers will be, too,” says AJ Bell Investment Director Russ Mould. “The United Nations’ FAO Food Price Index therefore requires attention. The benchmark, which spans key agricultural materials such as cereals, vegetable oils, meat, dairy products and sugar, is up 33% year-on-year. That is the fastest rate since 2011. 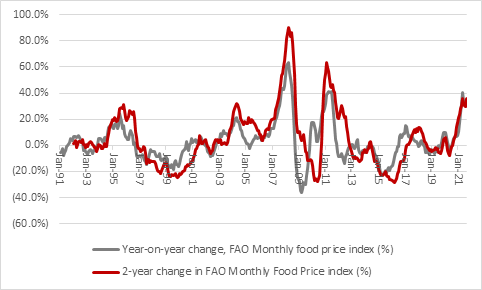 Source: Food and Agricultural Organisation (FAO) of the United Nations

“Investors will be interested – even concerned – to ascertain whether food prices will be the source of a sustained bout of inflation and one which may do damage to consumers’ ability and desire to spend.

“Central bankers will be watching, in case inflation forces their hand and requires a tightening of monetary policy in the form of a tapering of Quantitative Easing and higher interest rates.

“No doubt central bankers, to defend their view that the current spike in inflation is ‘transitory,’ will be keen to point out some of the factors involved in the food price surge. These could range from include global shipping and port bottlenecks, to a shortage of truck drivers to bad weather in countries such as Brazil, where drought and then unseasonal frost is badly affecting supply of oranges and coffee to the global market.

“But even the comparison against two years ago, before the pandemic struck in 2020, shows a 36% increase, so the current surge may not just be the result of a (low) base effect, even allowing for the role of these one-off factors.

“In many cases, the best cure for high prices of a product is high prices, as they either choke off demand or encourage additional supply. The latter may happen in time, if the weather helps, but it is not easy for people to stop eating, as they need their daily calorific intake. (In this context investors may need to keep an eye on the political situation too. Food shortages and soaring prices helped to spark the Arab Spring protests and uprisings in 2011, the Chinese Tiananmen Square protests in 1989 and before that the Russian and French Revolutions of 1917 and 1789).

“There appears to be some grounds for arguing that food prices are fuelling the current spike in inflation on both sides of the Atlantic even if the UK CPIH inflation basket has a weighting of just 8.9% toward food and soft drinks (with a further 10.4% weighting toward alcohol, tobacco and restaurants and hotels), and the US equivalent weighting is 7.6% (with a further 6.2% from eating out and 1.6% from alcohol and tobacco).

“These weightings reduce food’s overall influence and that helps to explain why the UK headline rate of inflation is 3.2% and America’s 5.4%, along with how grocers and suppliers decide to handle cost increases, either by passing them or taking the margin hit themselves. 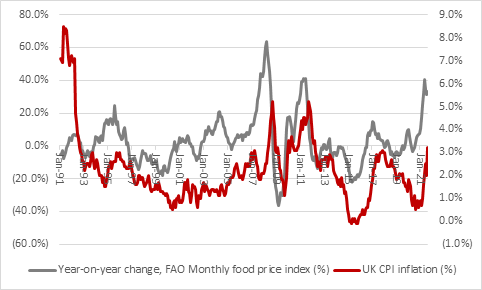 Source: Food and Agricultural Organisation of the United Nations, Office for National Statistics 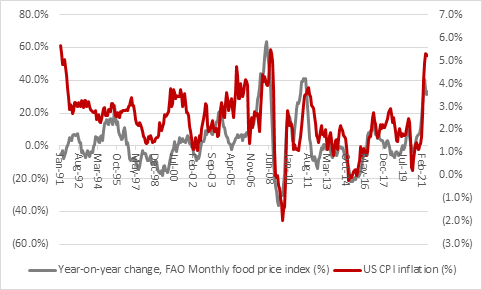 Source: Food and Agricultural Organisation of the United Nations, US Bureau of Labor Statistics

“It may be of little comfort to consumers that the way in which baskets of good are constructed to measure inflation is limiting the impact of rising food prices. Leave the economists’ desk behind and get out in the real world and this issue matters, especially to those who are less well off and where a greater percentage of income is spent on life’s essentials.

“Emerging markets are a case in point. It is possible to argue that food prices are a much bigger issue, if the apparent correlation between the cost of foodstuffs and an indicator inflation surprises is any guide. In this context it is no wonder that emerging markets such as Brazil, Russia and Mexico are leading the charge when it comes to interest rates rises in 2021.

“According to www.cbrates.com, there have been 56 individual hikes to borrowing costs around the world this year and all but two (first moves from Iceland and South Korea) have come from emerging markets. 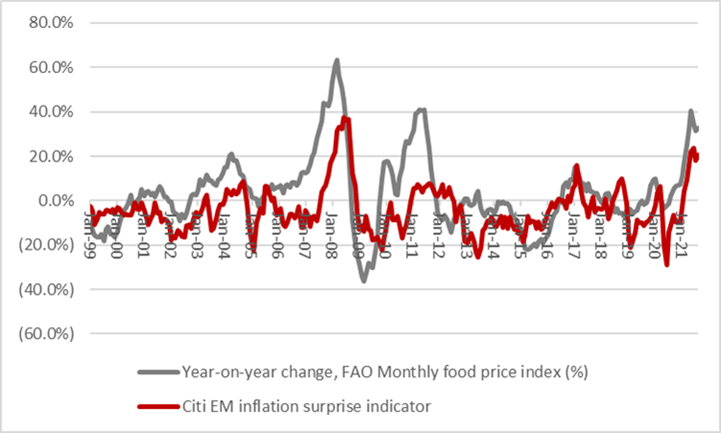 “It may well be that the weather comes to the rescue and the combination of rising supply, an end to shipping chaos and 2021’s higher base for comparison means that food price inflation (and price rises more generally) ease in 2022, to the relief of investors and central bankers alike. But caution is needed. If consumers start to accept higher prices, and get higher wages so they can pay them, inflation can become entrenched. 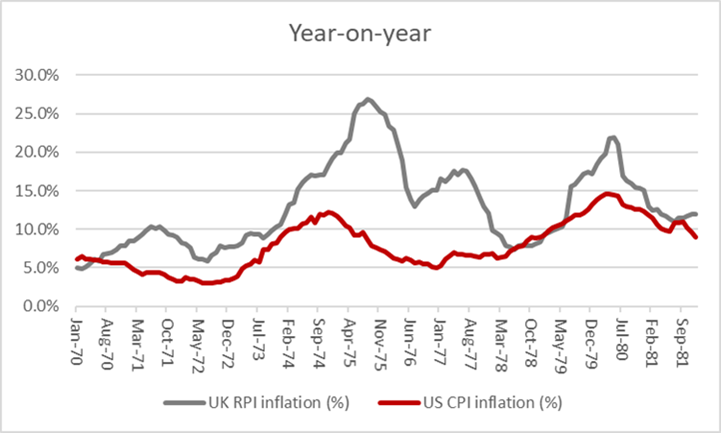 “There were three distinct waves of inflation in the 1970s and the last one was the worst of all. Only then did the Paul Volcker-led Federal Reserve and the UK’s Conservative government set about dealing with inflation by jacking up interest rates to double-digit levels, something that neither consumers nor financial markets will want to see in a hurry.”