Shares in Imagination are down by two-thirds this morning after key client Apple’s decision not to use the FTSE Small Cap’s silicon chip designs in products due for release in 18 to 24 months’ time.
3 April 2017
Share:

This is a juddering setback for Imagination, whose shares had begun to run strongly under chief executive Andrew Heath who took over last May after the sudden departure of long-standing leader Sir Hossein Yassaie in February 2016.

Sir Hossein left after a profit warning for 2016 and the announcement of a radical restructuring at Imagination which involved drastic cost cuts and the sale of its PURE consumer electronics business.

Today’s share price plunge takes Imagination back to levels last seen in 2009 and leaves the shares way adrift of 2012’s peak north of 700p (a mark they had even failed to reach during the technology, media and telecoms bubble of 1998-2000).

Imagination’s share price history, one marked by huge gains and then equally dramatic falls dating all the way back to its 1994 flotation as VideoLogic plc, is an object lesson to investors on the pleasure and pain that investors can enjoy and suffer when investing in technology stocks for five reasons (1999’s name change may have been the result of prior profit setbacks which led to the firm unwittingly acquiring the nickname of ‘VideoNasty’): 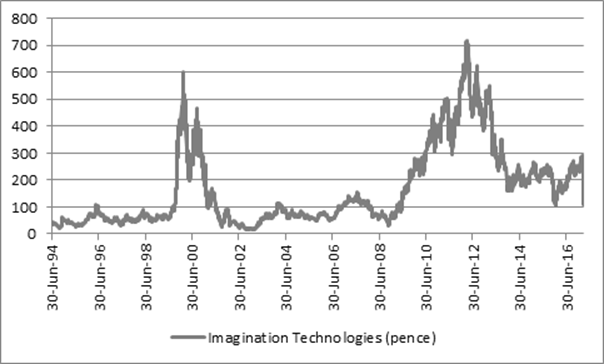 1.     Having great technology is ultimately never enough – share prices are driven by profits and cash flows in the end. Imagination’s record here has tended to be spotty at best, even if December’s interims showed some promising underlying progress, helped by the restructuring programme. 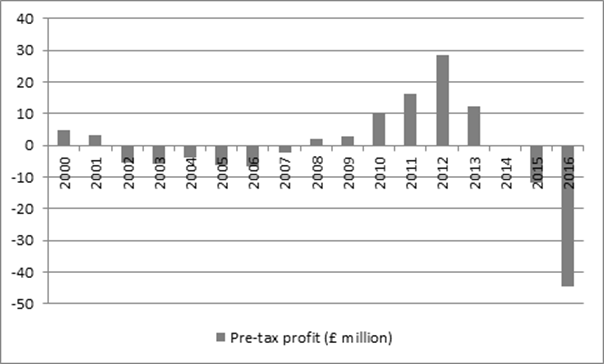 2.    Over-reliance on one major customer is always a red flag. Apple represents more than half of Imagination’s revenues, so losing this business is a huge blow. ARM, before its 2016 acquisition by Softbank, always commanded – and deserved – a higher valuation as it’s revenue streams and customer base was so much more diverse., as it proved by thriving even as Nokia was swept aside by Apple and Samsung in the mobile phone and smartphone/tablet market.

3.    Buying a stock for a potential takeover bid is a mug’s game. Either the bid fails to appear or it takes a longer than expected (and comes at a price lower than hoped). There had been speculation that Apple would think about acquiring Imagination and take control of its PowerVR graphics chips so it could deprive rival products of them. Apple is now developing its own chips so there is no need to license them from Imagination, let alone buy the firm

4.    There are few worse investments than a perceived growth stock that fails to deliver the growth. Tech stocks can be the preserve of momentum seekers but they can quickly jump ship if earnings fail to arrive as expected and then the stock often suffers a double-whammy as it suffers both a drop in earnings estimates and a de-rating to reflect the growth disappointment.

5.    Obsolescence risk remains a key challenge for any tech firm, no matter how cutting-edge its products seem to be today. The only way to guard against this is to pay a lowly valuation – but by their very nature go-go tech names tend to trade on high ratings as investors clamour for and price in their long-term their growth potential. Value hunters tend to avoid tech for this reason, as the list of tech stock corpses is a long one in what is a well-stocked graveyard, both in the UK and globally.

The smart phone and tablet computer are just the latest developments in a never-ending cycle of technological evolution. Each turn of the wheel has brought feast for a select few winners, who 'got it' and had first-mover advantage – and also famine for those whose offerings were overtaken and left looking old hat.

A few firms enjoy their day in the sunshine and they make plenty of hay (or profit and cash flow) – but the problem is very few stay at the top for more than five or ten years and once they fall, they fall hard (and in many cases, as suggested by the list above, pretty much disappear altogether).