“With around 85% of sales and 90% of profits coming from its American operation, Sunbelt, Ashtead provides a useful insight into the US economy and how it is performing. Investors who have a bullish view of the world will therefore take comfort from yet another quarter of double-digit percentage increases in both sales and profit, as Ashtead added to strong underlying growth with select acquisitions,” says Russ Mould, AJ Bell Investment Director.

“Yet the shares price still seems a bit underwhelmed, especially as it trades around 17% below the all-time peak reached last autumn.

“This probably reflects concern that the US economy is slowing down.

“The annualised fourth-quarter GDP growth rate of 2.6% was perfectly respectable, even if it did represent a slowdown from the 3.4% and 4.2% increases seen in the second and first quarters, as the effects of the Trump tax cuts began to wear off, trade worries gathered, the dollar rose and the US Federal Reserve increased interest rates.

“But the New York Fed Nowcast is looking for GDP growth of just 0.9% in the first quarter of this year (and the Atlanta Fed GDP Now estimate is just 0.3%). 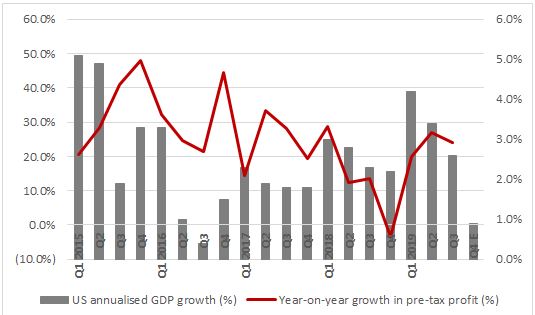 “This loss of momentum partly reflects the base effect caused by the tax cuts but also a string of soft data, ranging from house sales, auto sales, durable goods orders and rising inventory. The first-quarter Government shutdown is an additional complication, although that could at least mean there is some element of a snapback in the second-quarter, which may offer some comfort to bulls of Ashtead’s stock and those who are looking for the US economy to keep on firing global growth in 2019 and beyond.

“Ashtead’s American Sunbelt operation gets 47% of its sales from the construction industry and 53% from other parts of the US economy, as it provides aerial work platforms, fork lifts, earth movers, temporary power supply units, scaffolding and other equipment.

“Management and shareholders alike will therefore be watching certain US economic indicators with interest.

“A continued recovery in sentiment (and activity levels) across the housebuilding industry in the US would be particularly welcome after 2018’s second-half slump, which followed the increase in mortgage results that in turn resulted from the Federal Reserve’s sequence of interest rate hikes. 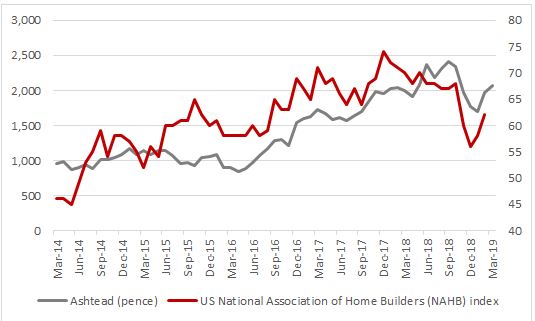 “US industrial production also wobbled during the second half of 2018 and Ashtead shareholders will be looking for improved momentum here, too. 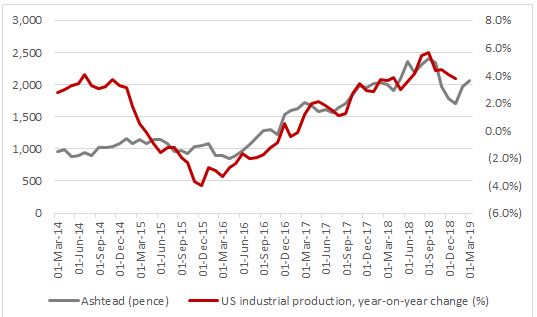 “Fans of Ashtead will also point to how the ISM manufacturing purchasing managers’ index (PMI) still sits well above 50, which is usually suggestive of future growth. Sceptics will counter by noting how this indicator peaked in August and has weakened since so it will be interesting to note this trend in the coming months, especially since Ashtead’s quarterly reports, and planned fleet expansion, gives no hint of any real softness in the US economy right now.” 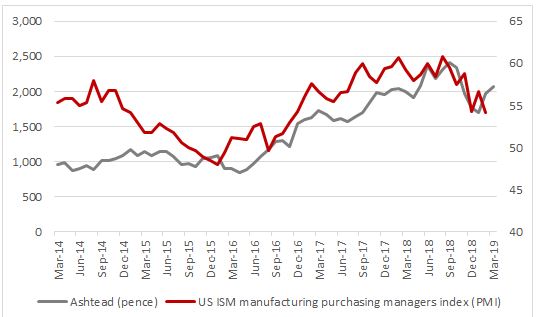