“March’s headline inflation figure in the UK, as measured by the ONS’ new preferred measure of CPIH, flattened out at 2.3% and the Bank of England is unlikely to change its unhurried approach to raising headline interest rates from their current record low of 0.25% as a result,” comments Russ Mould, investment director at AJ Bell.

“The CPIH and CPI benchmarks both came in unchanged with a 2.3% year-on-year increase in the cost of living, the same as in February. 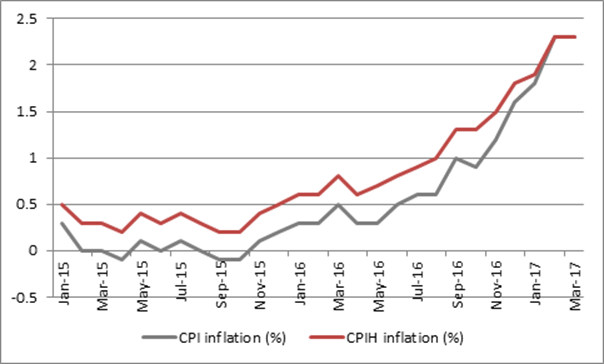 “Food, alcohol and clothing made the greatest contributions to this increase but transport costs (fuel) actually fell, to suggest the spike seen over the winter may the result of short-term factors such as the post-OPEC meeting rise in the oil price, higher salad and vegetable prices owing to Europe’s rotten winter, as well as sterling’s post-referendum slide (and even the pound has rallied from its early-year lows).

“The rate of growth in the “core” CPI reading (which excludes energy and food) dropped slightly, as did the retail price index (RPI), to again suggest the winter rise in the headline numbers may prove transitory.

“Core” CPI decelerated to 1.8% in March from 2.0% in February and RPI to 3.1% from 3.2% - the latter is particularly important because it is usually the reference point for utility bills and transport season tickets for consumers.

“Also noticeable is a deceleration in the rate of growth in the producer price indices, or factory gate indices. Raw material prices are still up by 17.9% year-on-year but that is down from the peak 20.4% growth rate of January while output prices were 3.6%, down by the 3.7% hike seen in February.

“This suggests companies are still being slow – or finding it difficult – to pass through increases in costs to customers, although Next, Dunelm and Mothercare have all said they will look to do so this year.

“The slight easing in output prices again suggests there may not be a real build-up in inflationary pressure that many were fearing, not least as powerful deflationary forces in the shape of the nation’s huge debts, unhelpful demographics and the price-crushing powers of the internet are as potent as ever. 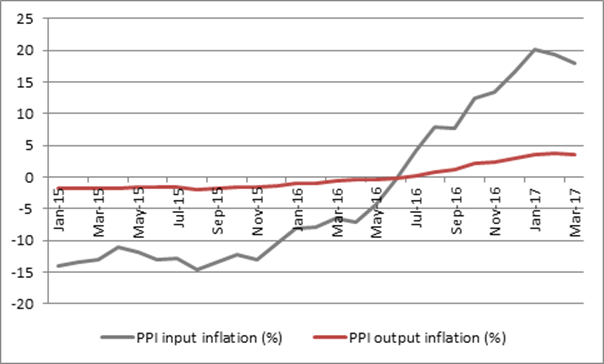 “None of this is likely to have Governor Carney and the Bank of England Monetary Policy Committee scurrying to raise interest rates straight away but their attentions will now switch to tomorrow’s employment and wages data.

“Wednesday’s wage growth number will therefore be particularly informative, not least as Governor Carney has in the past flagged any signs of a marked uptick here as a potential trigger for a tightening of monetary policy.

“Wage growth has cooled for the past two months, from November’s 14-month high of 2.8% down to 2.2% in January and any further deceleration will again take the heat off the Monetary Policy Committee.”