Barclays’ investment bank goes some (small) way to proving its worth

“On a stated basis, Barclays’ second-quarter, stated pre-tax profit fell by a fifth to £1.5 billion, which wouldn’t usually be a cause for celebration, but the shares are up all the same,” says Russ Mould, AJ Bell Investment Director. “This may reflect relief that the profit and loss account did not take another big hit from Payment Protection Insurance claims, the admittedly well-flagged increase in the interim dividend and a solid performance from the investment bank, whose spotty performance had been at the centre of the disagreement over strategy with activist investor Edward Bramson.

“On a headline basis, the numbers are look satisfactory, with first-half pre-tax profit up 82% to £3 billion, thanks mainly to the absence of £1.4 billion legal settlement with the US Department of Justice and a £400 million PPI provision in Q1 2018. The second quarter number did fall by 20% year-on-year but still met expectations. 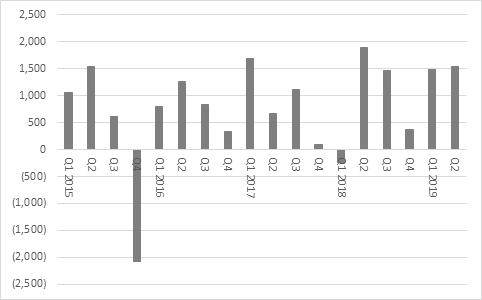 “That represents a dividend yield of 4.7% which, when added to how Barclays’ shares trade at less than 40% of their stated net asset value per share of 275p. That may grab the attention of contrarian value-hunters as Barclays looks cheap relative to a sector that has done badly within a UK stock market that itself looks underloved and undervalued after a long period of underperformance relative to its global peers.

“But this begs the question of what could unlock the value that may be there. Mr Bramson thought that it was reallocating capital within the group, mainly by taking it away from the investment bank – after all at the end of the first half Barclays UK was making a 15.1% return on the £10.3 billion of equity it had been allocated compared to the 10.5% that Barclays International had make on its £30.8 billion of allocated equity.

“That means the onus is on CEO Jes Staley and the Barclays management team to get the very best from the investment bank and its performance is one of three key indicators regarding the quality of Barclays’ interims and not just the quality.

•    Investment bank. In the second quarter, the corporate and investment bank made £887 million pre-tax, up from £835 million a year ago, although the first half was still down at £1.7 billion against £2 billion. Fixed income did well, corporate lending rose nicely and banking fees held up, although revenues from equities fell, presumably due to ongoing pressure on fees and research income. In a world of ongoing regulatory pressure on trading, commissions, research payments and capital requirements, the jury is still out on whether investment banking really can be a major money-spinner, at least relative to the capital that it soaks up, and this is during a bull rather than a bear market – but at least the Q2 figures look solid enough. 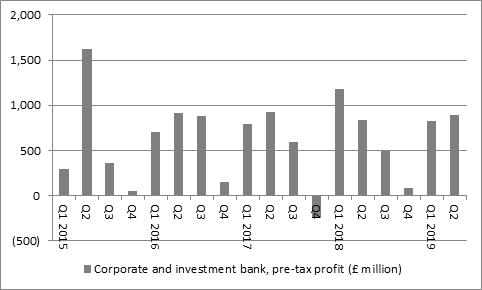 o    Restructuring costs, loan impairments and litigation and conduct costs. Since 2013 these items have cost Barclays in excess of £32 billion – more than double its total pre-tax profits and six times more than it has paid out in dividends over the same period. This trio cost Barclays £2.5 billion in the first half of last year but ‘just’ £1 billion in the first half of 2019. Barclays took no extra PPI claims provisions of any size and although loan impairments rose management attributed this to an accounting standards change and flagged that customer arrears data had shown no deterioration in the area of credit cards in particular. If Barclays can keep these figures to a minimum – and the PPI claims deadline of 29 August could help here – then profits could advance quite smartly. 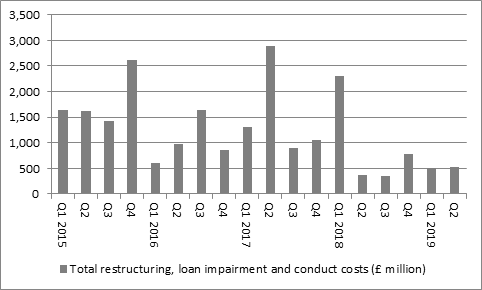 o    Net interest margin. This measures how profitable Barclays’ loan book is, as Barclays borrows money in the short term (or attracts deposits) at one interest rate and then loans the cash out at a higher interest rate over the long term. The problem now is that as central banks look to cut headline rates, the yield curve is flattening and the gap between short and long-term rates is narrowing. That squeezes the banks’ net interest margin and hurts profits, and Barclays is feeling that squeeze. Its net interest margin fell to 3.05% from 3.18% in Q1 and 3.22% a year ago. 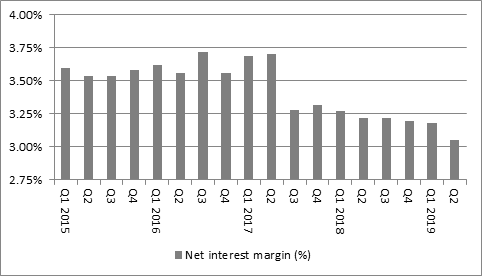 “The trend in net interest margin looks the least positive of the three in the first half and remains a concern going forward, especially if the Bank of England shifts its policy bias toward cutting interest rates rather than increasing them. The sluggish UK economy and wider, global growth concerns could therefore continue to hold back Barclays’ shares, even if they look cheap and for the moment Mr Staley and his management team are making a decent fist of persuading shareholders the investment bank has a valid role to play within the wider group – though a bear market could quickly change that.”