“Rising (adjusted) profits, falling debts and a planned return to the dividend list in 2017-18 all suggest that boss Dave Lewis’ planned turnaround at grocery giant Tesco is firmly on track,” comments Russ Mould, investment director at AJ Bell.  “However, the shares seem underwhelmed today, amid ongoing doubts over the merits of the Booker deal and whether it will make fixing the group’s profit margin woes more difficult rather easier.”

“The good news from today’s Tesco full-year results came from: 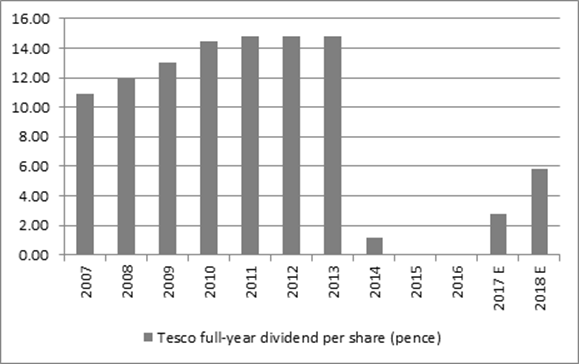 “However, the shares fell by nearly 3% to make them the worst performer on the day in the FTSE 100 in early trading. The absence of an upside surprise to earnings did not help but three other factors may also be weighing on sentiment:

Tesco is still a long way from its 3.5% to 4.0% operating margin ambition and most acquisitions fail to generate the revenue or cost benefits they promise, so Booker is by no means certain to help the FTSE 100 firm reach its goal.

“It is also depressing to see boss Dave Lewis justify the deal by citing “growth” without explaining growth in what. Many a takeover deal has been structured in a way that enhanced earnings per share but still destroyed shareholder value over the long term so the Tesco team will need a stronger justification that that when they make the case for the Booker deal to shareholders in both firms.”