Higher cash flow and yet another dividend increase are giving a boost to Vodafone’s shares but the juicy 5.5% yield looks necessary to compensate investors for the modest underlying sales and profit increase revealed by both this set of annual numbers and weak long-term record of growing book, or net asset, value.
16 May 2017
Share:

“A 2% increase in the total dividend to €14.77 reaffirms Vodafone’s position in the elite group of 26 FTSE 100 firms to have increased their shareholder pay-out each and every year for the past decade. (The pound’s drop against the euro enhances the growth rate in sterling terms for 2016-17). 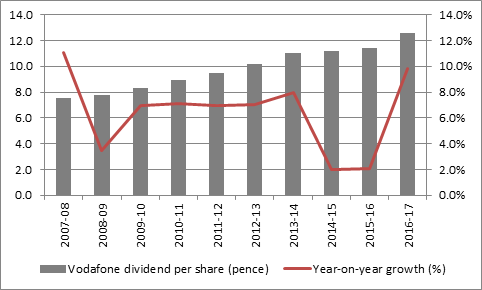 “However, dividend growth has slowed markedly and Vodafone’s 10-year compound annual growth rate the payment is the third lowest among those to have managed this feat.

“This suggests Vodafone has had to work ever harder to fund higher pay-outs so investors will be pleased to see a jump in free cash flow from €1.2 billion to €4.1 billion in the year just finished and CEO Vittorio Colao target €5 billion for the year just begun.

“The increase will be supported as much by falling capital investment, upon completion of the Project Spring service improvements initiative in the UK, as it will rising profits but even so, free cash flow of €5 billion compares to the annual dividend bill of around €4 billion.

“Free cash flow cover of 1.2 times is less than ideal. In addition earnings cover for last year’s dividend was barely 0.6 times even on an underlying basis, so there is relatively little room for any sudden profit shock in the event of say a major price war in a key market, although Vodafone’s relatively dependable utility-style income streams mean it has more room for manoeuvre than many.

“The yield remains key to the investment case for the stock given a patchy history of profits growth. This can be best seen in growth in book value (or net asset value) per share at the company, as this reflects not just the positive impact of profit growth but also the negative impact of asset write-downs, goodwill impairments and other one-off factors. 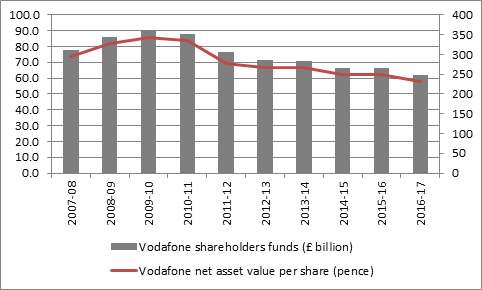 “Even allowing for the impact of currency movements on the balance sheet, Vodafone’s record here is less good – and a €3.7 billion write-down on the value of its Indian assets after a price war there is just the latest example.

“Rather than glibly accepting these charges, investors therefore would be well served to ask why management feels the assets are worth less now than previously.

“After all, Vodafone acquired the spectrum and developed the assets – so either it overpaid for them in the first place or has not run them as well as it could have subsequently. This shows up in the unimpressive development in NAV per share, if not the “adjusted” earnings numbers which strip out all of the write-downs and put a potentially flattering gloss on the stated figures.”