Is Deliveroo turning up just as the IPO market turns down?

“The bears may now be marching two by two toward Cathie Wood’s ARK Innovations Exchange Traded Fund (ETF), which is down by 20% from its highs, and those who are looking sceptically at global stocks will be also be growling a bit more loudly about initial public offerings (IPOs) and market newcomers,” says Russ Mould, AJ Bell Investment Director. “This makes the timing of the Hill Review, designed to loosen regulations for new floats in the UK, and Deliveroo’s announcement of its planned London listing especially interesting, because two ETFs designed to track the performance of market newbies look like they are starting to teeter.

“The US-traded Renaissance IPO ETF is designed to track the performance of sizeable US equity market newcomers and deliver that performance to investors, minus its running costs. Firms that have been listed for two years are removed from the basket of stocks that the ETF follows at the next quarterly index review.

“The tracker has been a phenomenal success, surging by 218% since its launch in 2013, a rate of advance that has even put the S&P 500’s 122% romp over the same time span well and truly in the shade.

“The gap between the ETF and the main US benchmark has become even more marked in the past year. The Renaissance IPO ETF has more than doubled while the S&P 500 is up by a quarter, although the gap has closed a little. The ETF has lost 15% of its value since 15 February, and the S&P 500 is down just 3%. 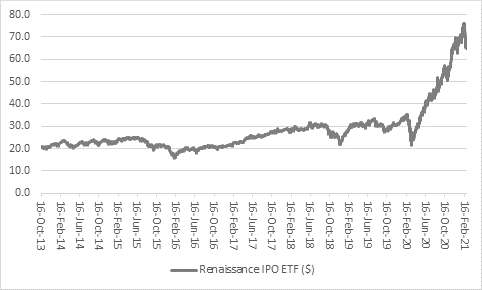 “This is intriguing as the largest holdings include some of the hottest recent performers on the US stock market. The top ten are Uber, Zoom Video Communications, CrowdStrike, Pinterest, Peloton, Slack, Lyft, Datadog, Avantar and Palantir.

“The same bout of weakness can be seen in the Renaissance International IPO ETF, although not quite to the same degree, perhaps because its rise was also marginally less meteoric. Since inception in October 2014, the ETF is up by 85% against a 62% gain from the FTSE All-World index, while over the past year the tracker can point to a 49% advance compared to 27% at the global benchmark.

“Since 15 February, the Renaissance International IPO ETF is down 8% and the FTSE All-World is down 3%.

“The UK’s THG is currently the seventh-biggest holding in the tracker. The holdings in the top ten are Softbank, Nexi, TeamViewer, Smoore International, China Feihe, EQT Partners, ESR Cayman, Wuxi AppTec and Allegro.eu. 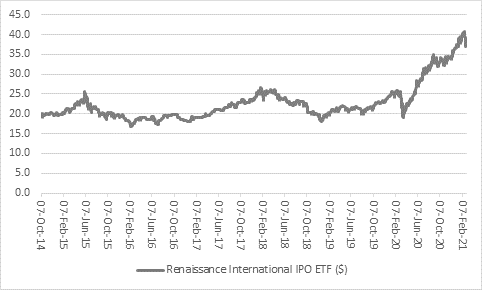 “This certainly provides an interesting backdrop for the proposed Deliveroo flotation on the London market, which could now become a key test of investor risk appetite.

“Deliveroo is just the sort of stock that would have flown out of the door a few months ago – a company whose business model proved perfectly suited to the pandemic and where customer growth has been rapid. Chief executive Will Shu is also on record as saying the firm broke into profit in 2020, having previously racked up heavy losses.

“Yet investors now seem a little wary of ‘jam tomorrow’ growth stocks and seem to be preferring ‘jam today’ companies, those whose business models have been worst hit by the pandemic, as they now offer the greatest near-term recovery potential. Better still, these shares have generally done less well not just for the past year but the past decade, so they could just be offering faster growth at a much lower valuation.

“This tactical discussion is also the result of gathering signs that inflation may just be rearing its head. If it does – and that is by no means guaranteed – then this would again suggest a rip-roaring economic upturn is coming. That could drive up bond yields and that has implications for stocks like Deliveroo, whose profits are expected to come thick and fast in the future, after its initial customer land grab (assuming that profits can indeed be made on a sustainable basis is what is a highly competitive delivery market, a market that itself faces competition from restaurants, meal-kit delivery firms and even the concept of going to a supermarket or shop, buying the ingredients and cooking them yourself).

“Rising bond yields nudge up the discount rate that analysts use in their discounted cashflow models (DCFs). The higher the rate at which future cashflows are discounted back to their net present value (NPV), the lower the value of the equity. This is a particularly acute issue for companies whose best years are expected to be well ahead of them, when investment now pays off in booming profits and cashflow in the future – such as technology stocks, biotech stocks and firms like Deliveroo, which are still in their early days of development.”