FAANGs look to get back on the growth track in 2020

“In the past year the aggregate market capitalisation of Facebook, Amazon, Apple, Netflix and Google’s parent Alphabet has gone up by 45%, or almost $1.3 trillion, even as combined consensus earnings estimates for 2019 and 2020 have fallen by 7% and 8%, or $10.7 billion and $9.6 billion respectively,” says Russ Mould, AJ Bell Investment Director. “This combination of soaring share prices and sliding earnings mean that the FAANGs have a group have been hugely re-rated from 21 times earnings for 2020 to nearly 30 times now.

“This makes the imminent quarterly reporting season particularly interesting as the FAANGs try to demonstrate that the earnings blips of the last 12 to 18 months are just that. Netflix will be the first to publish its results on 21 January and Alphabet the last of the five on 3 February.

“The drops in earnings forecasts reflect a range of issues, such as saturation in the smartphone market and slower upgrade cycles, regulatory pressure and increased investment in content, customer facilitation or new projects. The effect of the Trump tax cuts which helped to boost earnings in 2018 is also now wearing off, with Netflix actually noting a big jump in its tax charge in 2019.

“At the moment, investors are being very forgiving in the view that new product or services releases will fire earnings growth, customers are being more tolerant of data use than regulators and those investments will pay off in the long term by opening new markets or boosting returns from existing ones.

“Even if earnings forecasts have dropped slightly in the past year, analysts and investors continue to expect rapid progress going forward. Such consistent growth is rare in the current low-growth, low-inflation and low-interest-rate interest environment and as a result firms that can increase profits on a secular basis thanks to the strength of their products, services and competitive position will naturally be very highly prized.

“An aggregate operating margin of more than 18% across the first nine months of 2019 (ranging from 30% at Facebook to 5.5% at Amazon) also means the FAANGs are very cash generative, especially as capital investment represented less than 9% of total sales for the quintet from January to October last year. 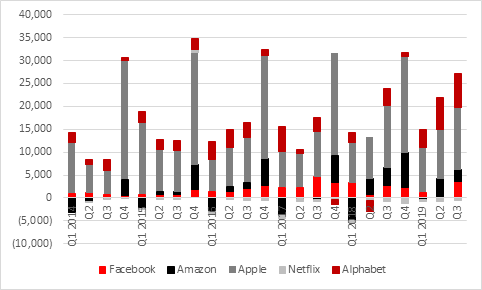 “Free cash flow has picked up nicely and this has helped to top up a net cash pile that exceeds $100 billion between the five firms, even adjusting for their lease and other contingent commitments. The combination of more cash on top of net cash is funding dividends from Apple and meaty buyback programmes at Apple, Facebook and Alphabet.

“Cash returns to shareholders at the FAANGs came to $83 billion in the first nine months of 2019 (2%) of their current market cap), leaving them firmly on track to exceed the $93 trillion handed back in 2018 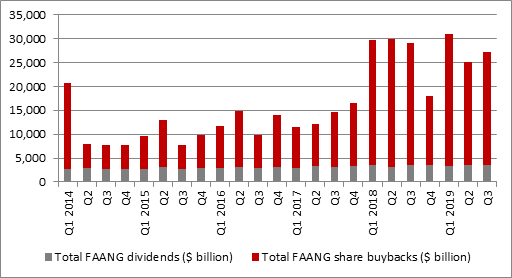 “Such largesse means investors again seem willing to look through the short-term earnings disappointments which characterised late 2018 and early 2019, although the higher the FAANGs’ valuation goes, the less room they have for error and the less tolerant shareholders may be of any further slips in earnings forecasts.

“If investors take consensus earnings forecasts on trust, then the five FAANG names trade on nearly 30 times earnings for 2020 and 25 times for 2021.

“That implies price/earnings growth (or PEG) ratios of 1.7 times for 2020 and 1.2 times for 2021. These multiples may tempt those who feel they are still getting ‘growth at a reasonable price’ with some income thrown in.

“Earnings disappointments could nevertheless leave those lofty multiples exposed but – given the stocks’ apparent impermeability to estimate downgrades over the past 12 months – perhaps a greater long-term danger lies in the form of inflation and higher interest rates.

“Neither seems likely for now, although that would only increase their shock factor were they to appear.

“Any upturn in wider economic growth and inflation would mean that cyclical increases in earnings would be easier and cheaper to find than secular growth stocks, given the multiples on which the FAANGs and other tech names trade, relative to say banks, airlines, retailers or other cyclical sectors. In addition, higher interest rates would increase the discount rate applied to future cash flows in discounted cash flow (DCF) models and decrease the net present value (NPV) of those cash flows, and thus the theoretical equity valuation of perceived long-term growth companies, such as the FAANGs and many other tech stocks.”