Ferguson raises fears of US slowdown

“Shares in plumbers’ merchant Ferguson are losing steam today after the company’s warning of a slowdown in second-half sales growth, which itself raises questions about the economic health of its largest target market – the USA,” says Russ Mould, AJ Bell Investment Director.

“Ferguson racked up organic sales growth of 6.5% for the first half, a little below analysts’ forecasts. An 8% increase in ongoing trading profit (on a constant currency basis) also marginally missed estimates and implied a slowdown from the first quarter to the second.

“For the first half, it looks like the villain of the piece was the UK, where sales fell again on an underlying basis in the second quarter.

“However, what has really spooked investors is management’s forecast of sales growth for the year of 3% to 5%. That implies a modest growth in the second half after that 6.5% increase in the first.

“The only logical conclusion here is that the US is now seeing a slackening in growth too, since America represents some 80% of group sales and 90% of profits. This also explains why Ashtead’s shares are weaker today since the equipment rental specialist also generates around 90% of its profits the USA via its Sunbelt operations.

“Ferguson derives around half of its sales from residential construction and a third from commercial building projects with the rest coming from infrastructure and industrial projects.

“Recent data on new housing permits, new housing sales and new housing starts in America have all been spotty. Analysts and economists have blamed this on bad winter weather, the US Government shutdown and the spike in the benchmark 30-year mortgage rate that followed the Federal Reserve’s quartet of interest rate hikes last year. 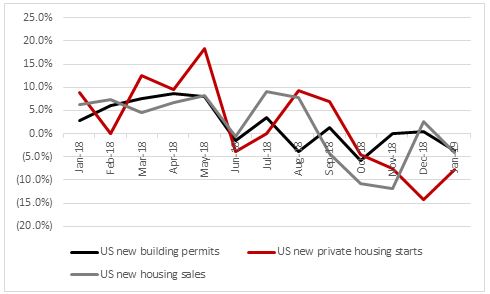 “The National Association of House Builders (NAHB) sentiment index also slumped late last year but had started to recover. That would normally have been a good sign for the shares, although at 62 the NAHB indicator still stands some way below last February’s peak of 72. 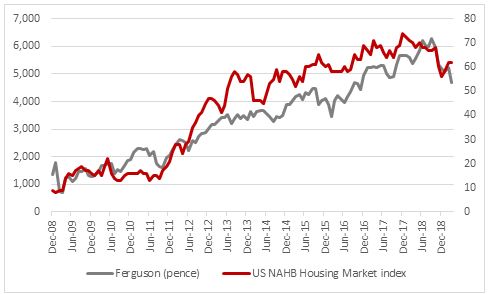 “The benchmark 30-year mortgage rate has now come back down to 4.28% which you would normally expect to boost demand. Ferguson’s rather cautious outlook today suggests this might not be the case and perhaps this is one reason why the US Federal Reserve is now treading carefully with regard to any future interest rate increases.” 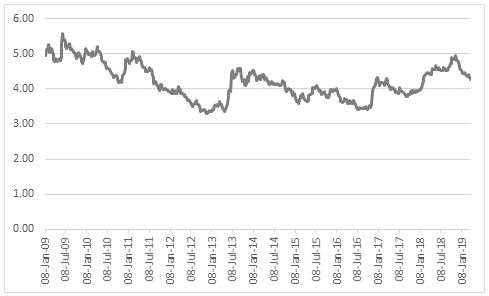