FTSE 100 earnings momentum falters as 2018 draws to a close

“Positive earnings momentum helped to carry the FTSE 100 through the first half of the year, as analysts upgraded their profit forecasts and the index peaked on a closing basis at 7,877 in May, but the rate of increases slowed in the third quarter and came to a grinding halt in the fourth,” says Russ Mould, AJ Bell investment director. “In the final three months of the year profit forecasts actually slipped very slightly for 2019, to £241.5 billion from September’s estimate of £242.9 billion.

“This may help to explain why the FTSE 100 lost momentum in the fourth quarter of 2018, especially given the ongoing uncertainty over global tariff and trade policies, Brexit and the US Federal Reserve’s apparent commitment to tightening monetary policy and draining away some of the cheap money which has helped asset prices rise on a global basis for the past decade.

“However, aggregate FTSE 100 pre-tax income is still forecast to rise by 7% in 2019, for a fourth consecutive year of growth, and the estimates of £241.5 billion would represent another all-time high level, one that comfortably exceeds the (commodity-boom-led) £203.5 billion of 2011 and the pre-crisis peak of £166 billion in 2007. 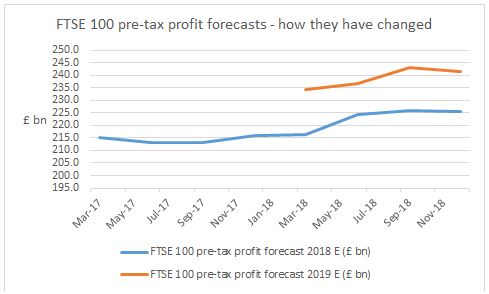 “The mix of the FTSE 100’s earnings progress remains reliant upon oils and financials (notably banks) in particular.

“Oil producers have enjoyed a bumper 2018 as higher crude prices have allowed them to maximise the benefits of the cost and capital investment cuts which were pushed through in response to the oil price slump of 2015-16. The fourth quarter’s retreat in the oil price from north of $80 to barely $60 could therefore represent one potential threat to FTSE 100 earnings growth forecasts for 2019 and also why estimates flattened out in the fourth quarter of this year. 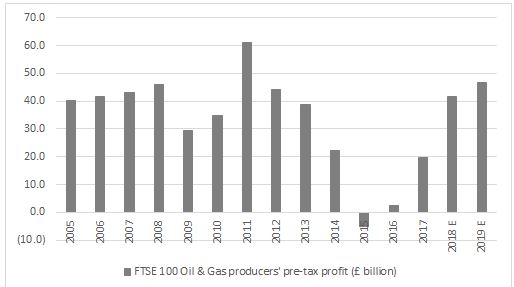 “We have yet to see the fourth-quarter numbers for this year – the period when the big lenders tend to book any major write-downs as they assess their loan books and cost base with the year ahead in mind – but analysts still expect the Big Five FTSE 100 banks to increase profits in 2018 and again in 2019. The rate of growth does slow in 2019, perhaps due to investment in digitisation and IT security, although the final deadline for PPI claims is a further obstacle which needs to be negotiated.

“Poor share price performance across the sector does suggest that investors have yet to be fully convinced that the big lenders indeed in rude health, because perhaps because of fresh worries over competition, regulator pressure, shaky Italian banks and wobbly financial markets, even if rising interest rates and bond yield are in theory positive for their net interest margins. 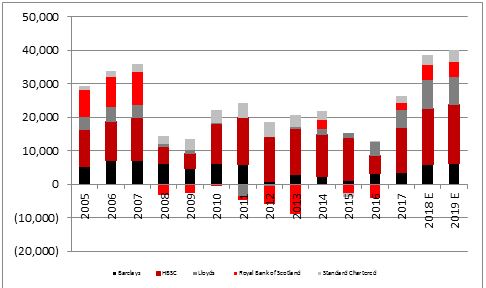 “Intriguingly miners are expected to suffer a small drop in earnings in 2019, after across-the-board weakness in industrial metal prices during 2018, with only palladium offering any real cheer to producers and explorers, thanks to its presence in catalytic converters and tougher regulations on emissions from cars. 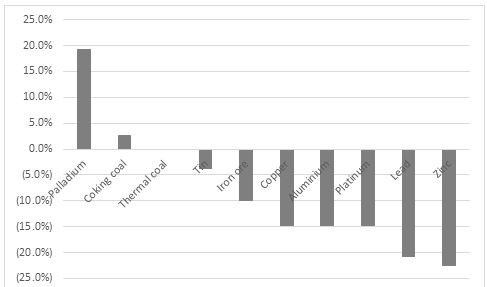 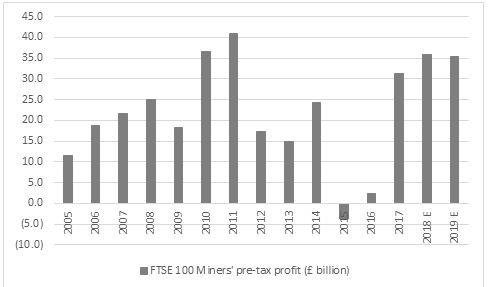 “Given concerns over the banks, the oil price and China’s economy (let alone that of the UK, as the Brexit negotiations drag on) it is easy to pick holes in analysts’ forecasts for 7% pre-tax profit growth in 2019.

“The good news is that the FTSE 100’s turgid 2018 performance and its lowly valuation may at least partly price in the risk of earnings downgrades.

“The index trades on barely 11 times earnings for 2019 and 31 of its members trade on 10 times forward earnings or less.

“Such a lowly rating, especially when coupled with a 4.9% prospective dividend yield, means that the UK stock market does have three things going for it: it has already underperformed, it is potentially cheap and it offers a meaty dividend yield.

“While there are clear risks it may not take too much too surprise on the upside either, given the pessimism which seems to surround the UK’s stock market and economy at the moment.”