“We are six months into 2019 and the FTSE 100 is up nearly 11%, with the prospect of a dividend yield of some 4.5% on top, returns that pretty much any investor would have taken had you offered them up at the start of the year. The big question now is where do we go from here?” says Russ Mould, AJ Bell investment director.

“A lowly valuation – in the form of a forward price/earnings ratio of around 13 times and a 4.5% dividend yield – is offering support and earnings forecasts are proving resilient, but it may need profit estimate upgrades for the index to really kick on in the second half and beyond.”

“Bulls of UK stocks may therefore be drawing comfort from how aggregate profit forecasts for the FTSE 100 are holding up, despite the prevailing uncertainty over issues such as global trade and tariffs, central bank monetary policy and the growth trajectory of the Chinese and US economies, let alone Brexit. Equally, bears can point to a lack of upgrades in earnings (at least of any magnitude) and downgrades to dividends to back up their cautious outlook. 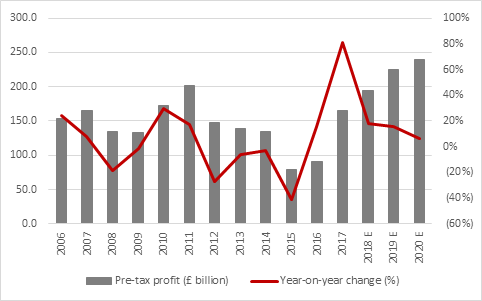 “In 2019, oils and miners are forecast to churn out £74 billion in profit, so the base of the FTSE 100’s earnings power seems more broadly based than it was eight years ago. On balance, this should be a good thing, especially as the aggregate profit contribution from oils and miners is expected to drop by some £1.6 billion in 2019 thanks to soggy commodity prices.

“Financials (banks in particular) and industrial stocks are seen by analysts as taking up this slack - and more. The rebound in industrials stems mainly from Rolls-Royce and Melrose, as the former sorts out its engine problems and cost base and the latter gets to work on 2018’s acquisition of GKN.

“In aggregate, analysts’ earnings forecasts for the FTSE 100’s members have dropped by 7% so far this year, to £226 billion from £242 billion at the end of last year. The only good news is that the rot stopped in the second quarter, when earnings forecasts ticked up from £224 billion in March. 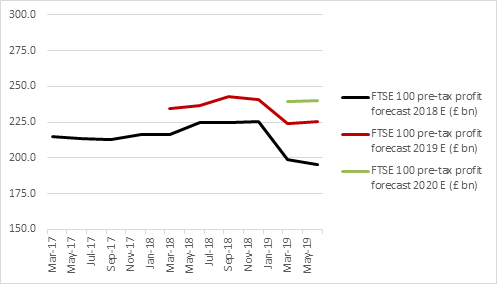 “This absence of profit upgrades or downgrades suggests that neither FTSE 100 boards nor analysts know much more than investors. The battle lines therefore remain drawn.

“Bulls like UK equities because they have underperformed their global peers for more than three years, look cheap on both an earnings and a yield basis as a result, and it will just need a bit of positive forecast momentum to stoke fresh interest.

“Bears will counter that the FTSE 100 is cheap because it deserves to be, given concerns over the quality of profits, the quantity of dividends and how any downgrades in the event of a global slowdown could leave the index bereft of a positive catalyst.”