“Mike Ashley may well be hoping that England’s remarkable victory in the 2019 Cricket World Cup final will translate into more sales of cricket kit in his shops but any feel-good factor on this front is going to be overshadowed by today’s announcement of a delay in the publication of Sports Direct’s annual results,” says Russ Mould, AJ Bell investment director.

“Sports Direct’s explanation that auditors Grant Thornton need more time to make sure the numbers are transparent, following a Financial Reporting Council review of the 2018 figures, makes sense but investors will be more concerned by two other factors cited for the delay. One is the integration process regarding August 2018’s acquisition of House of Fraser for £90 million. Worse still, Sports Direct says that a number of issues could mean the earnings guidance given last December for the full-year to April could prove too optimistic.

“Since Mr Ashley gave guidance both including and excluding House of Fraser some eight months ago, this implies that trading in the core retail business has also disappointed.

“Mr Ashley suggested that profits on the basis of his preferred metric, underlying EBITDA (earnings before interest, tax, depreciation and amortisation of goodwill), would rise by between 5% and 15% excluding House of Fraser and would fall including the purchase. At the first-half stage, underlying EBITDA rose 15% to £180 million excluding acquisitions while it fell 4% to £149 million including them. 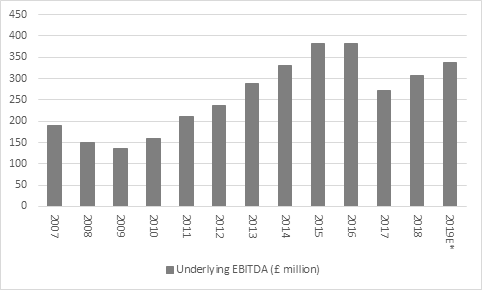 “The hint that underlying EBITDA will now undershoot forecasts, excluding acquisitions, will stoke concerns that Sports Direct’s strategy to supplement organic growth with an acquisition spree is serving as a distraction to management and overstretching the key teams at a time when the core business offers more than enough challenges to keep them busy – anyone working in the buying departments right now has a pretty unenviable task, for starters.

“The one-time FTSE 100 member has snapped up not just House of Fraser, but also Evans, GAME Digital and Sofa.com, as well as stakes in Findel and French Connection. A near-30% holding in Debenhams was rendered worthless when that firm fell into administration this year.

“The strategy has yet to prove itself, as the group’s 2018 gross margin was the lowest seen during Sports Direct’s time as a public company. Mr Ashley now needs to show that he can make the deals gel while continue to develop the core Sports Direct operation’s competitive position, in the face of economic uncertainty and the wider woes of bricks and mortar shops. On an underlying basis, pre-tax profit in 2018 was barely half that of 2015.” 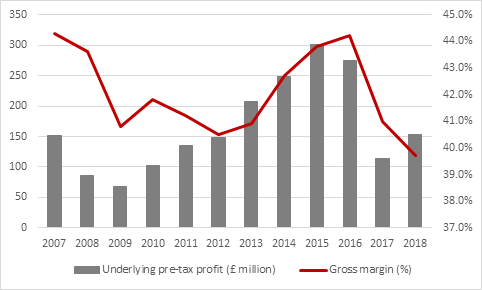