Investors fail to take a shine to Fresnillo

“UK-based investors do not seem to the share r/WallStreetBets community’s interest in silver and silver miners, judging by the muted response to Fresnillo’s full-year results,” says Russ Mould, AJ Bell Investment Director. “Shares in the Mexican member of the FTSE 100 appear unimpressed, even though profits met expectations, the dividend exceeded them and output guidance for 2021 was maintained, which made a welcome change after a series of operational setbacks and mishaps.

“As a result, Fresnillo trades near nine-months lows even as silver just below eight-year highs at $27 an ounce. 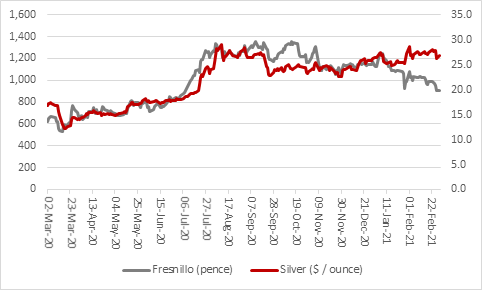 “One reason for the shares’ poor performance is the degree to which the pandemic is affecting Mexico, home to all seven of Fresnillo’s operating mines, all three of its development projects and all four of its advanced exploration projects. The pandemic has delayed commissioning of work at the Saucito mine and Juancipio project and the start of new plant operations at the Fresnillo. A landslide at the Noche Buena gold mine was a further complication in 2020.

“As a result, silver output fell by 3% to 53.1 million ounces of silver in 2020 and a gold output slid by 12% to 766,600 ounces. Shareholders will be relieved to see no reduction to the guidance for 2021 handed out alongside January’s trading update. Fresnillo is sticking to its targets of between 53.5 and 59.5 million ounces of silver and 675,000 to 725,000 ounces of gold. However, the outlook statement is understandably cautious, given how COVID could again make its presence felt this year. 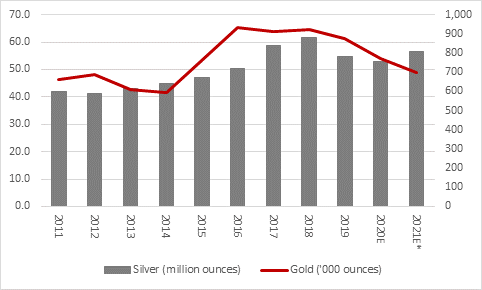 “Silver’s price is up 60% year-on-year, while gold is up 10%, so that will help Fresnillo make the most of the increases in production is the precious metals stay firm, even though the miner has hedged 7% of its 2021 silver output at an average floor price of $20 and an average price ceiling of $50.

“Higher metal prices propelled Fresnillo’s preferred profit metric, EBITDA (or earnings before interest, taxes, depreciation and amortisation), 73% higher in 2020 and analysts have pencilled in a further 50% gain in 2021. However, much will depend upon the silver price, as well as a good run operationally 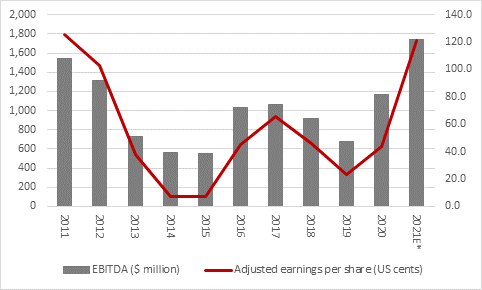 “However, much will depend upon the silver price, as well as a good run operationally, and the same can be said for the dividend.

“Fresnillo had trimmed interim dividend very slightly but declared an increase in its full-year payment to $0.2350, up from $0.1190, to take the full-year total to $0.2580. Again, analysts expect a further healthy hike in the payment in 2021, assuming silver lives up to its billing. 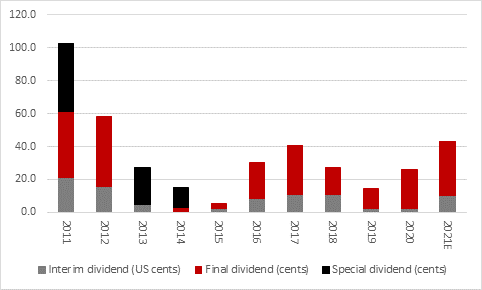 “There are four factors which could influence the price of silver, over and above any sustained buying spree from Reddit users.

•    Investors may continue to price in the almost unthinkable return of inflation, thanks to rampant central bank money creation through Quantitative Easing schemes, governments’ accumulation of ever-higher deficits, supply-side dislocation thanks to COVID-19 and also possibly firms putting up their prices to help the meet the additional costs of staying in business in a post-pandemic world. Rampant money supply growth in the US, UK, EU and Japan may also persuade advocates of ‘hard’ money to abandon ‘fiat’ currency in favour of alternative asset classes that are seen as stores of value

•    Perversely, the rise on Government bond yields associated with those fears of inflation could work against silver. Rising bond yields increase the opportunity cost of holding the metal, which generates no yield at all, and lead soe investors to seek income from government or corporate paper.

•    Rampant money supply growth in the US, UK, EU and Japan may also persuade advocates of ‘hard’ money to abandon ‘fiat’ currency in favour of alternative asset classes that are seen as stores of value, such as gold and to a lesser degree silver. US Federal Reserve ramped up QE in 2020 in response to the pandemic and has kept on going in 2021, to take taking its total assets to $7.6 trillion, up from $4.2 trillion a year ago.

Gold and silver surged between 2008 and 2011 as the Fed ran its first three rounds of QE but they then lost ground as it looked like the monetary authorities had regained control of the economic situation. The pandemic may have changed all that, and the cost of keeping the show on the road this time around has already been much higher.

•    Unlike gold, silver has industrial uses and as such is a more ‘cyclical’ play, because it is the best conductor of all metals and has antimicrobial attributes which make it a perfect biocide. Demand from the traditional film photography industry is probably all but gone but these chemical properties means silver is ideal for the medical equipment, electronics, water purification and solar power industries in particular.

As the world focuses ever-more intently on renewable sources of energy, solar panels could be a big driver of silver demand.