“America’s Dow Jones Industrials set a new intra-day record high on Monday while the NASDAQ Composite slid into correction territory, just over 10% below its mid-February closing peak, to once more raise the issue of whether investors are now preferring ‘value’ stocks – which potentially offer rapid growth today – over ‘growth’ names, which are usually seen as offering increases in profits and cash flows well into the future,” says Russ Mould, AJ Bell Investment Director. “Investors thus seem to be switching from jam tomorrow, at high valuations for growth stocks, to jam today at lower ones for cyclical stocks, in the view that the combination of vaccination programmes, fiscal stimulus and monetary stimulus will prompt a strong economic recovery.

“This can be seen by dividing the value of the Dow Jones Industrials by that of the NASDAQ. If the line rises the Dow is outperforming and the line falls if the Dow is underperforming. On a relative basis, the Dow has now matched the NASDAQ since the benchmark US ten-year Treasury yield bottomed at 0.51% on 4 August 2020 – even though tech stocks such as Apple, Facebook, Alphabet, Tesla and pandemic winners such as Netflix continue to grab the headlines.

“The Dow does have its new-world winners, such as Apple, Salesforce.com and Microsoft, but it is generally stocked with more cyclical names, such as Caterpillar, Home Depot, Wal-Mart, 3M and a host of financials. 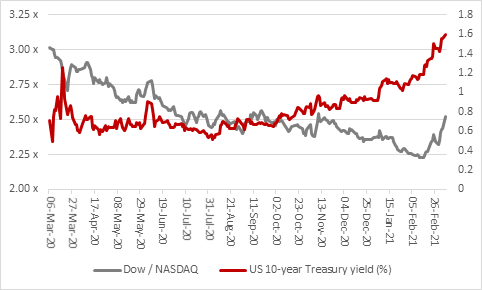 “This switch from jam tomorrow to jam today to some degree reflects the spike in US government bond yields, itself a sign that markets are pricing in faster economic growth, higher inflation and even the possibility of higher interest rates for good measure.

“This is not an entirely new trend, however, even if the Dow has only just really started to show some signs of putting up a fight against the NASDAQ.

“This can be seen by comparing the relative performance of two US-quoted exchange-traded funds (ETFs).

“The Invesco QQQ Trust is designed to track the performance of the NASDAQ Composite’s index’s largest 100 non-financial companies and deliver that performance to investors, minus its running costs. The QQQ has $141 billion in assets under administration and its biggest holdings are Apple, Microsoft, Amazon, Alphabet, Tesla, Facebook and NVIDIA. It is therefore a good proxy for ‘growth’ and those firms whose business models have thrived during the pandemic.

“In the opposite corner we have the iShares Russell 2000 Value ETF. It has $16 billion of assets under management and follows a basket of nearly 1,500 stocks that offer ‘value’ characteristics. Two-thirds of the portfolio lies in the financials, industrials, consumer discretionary and real estate sectors – against barely 20% in the QQQ – and it has just 6% in technology, against 48% in the QQQ.

“Again, dividing the price of IWN, the ‘value’ tracker, by that of the growth-centric QQQ, shows which style is outperforming. If the line rises, it is IWN and value that are prevailing, and vice-versa.

“For all of how tech and growth has hogged the headlines as a pandemic winner over the past 12 months, jam today stocks have done just as well as jam tomorrow ones – and cyclicals have markedly overperformed secular growth since last summer’s low in US Government bond yields. 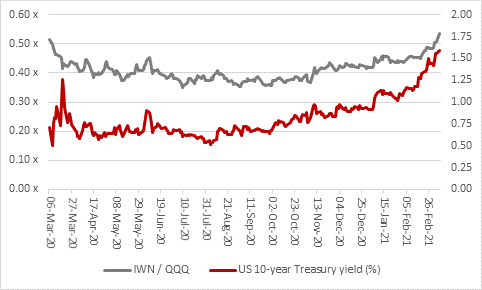 “This trend is not confined to the USA, either. Although the FTSE UK value and growth indices have a shorter trading history, they still show the same apparent shift in investor sentiment.

“Conveniently launched at the same index level on the same day, the Growth benchmark is up 1% and the Value one down 17% since inception. However, since the UK ten-year Gilt yield reached its low of 0.04% on 4 August 2020, the value index is up by 18% and the growth one down by 6%.

“This shift can be seen in the list of the best and worst performers in the FTE 350 since 4 August last year.

“The winners are generally cyclicals – transport stocks, retailers, leisure plays, house builders and financials (with the occasional bid candidate thrown in). By contrast the worst performers are precious metal miners – as markets clearly feel they have no need for such  a haven right now – as well as pharmaceutical companies, Dettol-maker Reckitt Benckiser, supermarkets and other perceived pandemic winners such as Serco, Just Eat Takeaway.com, or highly-valued ‘growth’ names such as Avast and Avon Rubber.

“Investors therefore have to ask themselves whether bond yields will keep rising, as markets price in an economic recovery and the prospect of rapid cyclical increases in earnings. Cyclicals – jam today – could produce faster earnings increases than even secular growth names – jam tomorrow - and do so from a lower valuation point, should the economy does indeed pick up speed.

“If we get a double-dip, as the virus proves more tenacious than hoped and huge increases in global indebtedness smother corporate and consumer spending, then bond yields could quickly reverse – and investors would likely go back to placing a huge premium valuation on secular growth over cyclical recovery plays. That would bring tech and biotech back into favour.

“Equally, the flipping between styles and sectors could just be a sign that equity markets are flagging. Investors start retreating to names that they feel are less speculative and safer – such as the well-established heavy-hitters of the Dow Jones, rather than the NASDAQ – after a speculative episode in the view that this will protect them from any fall-out. There has been no shortage of speculation in the past year, from SPACS to initial public offerings and from cryptocurrencies to heavy use of options of leverage but perhaps the Dow’s resurgence is sending a less optimistic signal about the economy than it first seems.

“Yet if the economy really is on the verge of a stunning upturn, then investors should not underestimate the violence that could be wrought upon growth-oriented portfolios. The last time jam tomorrow stocks really fell from favour was after the tech, media and telecoms bubble burst in 2000. 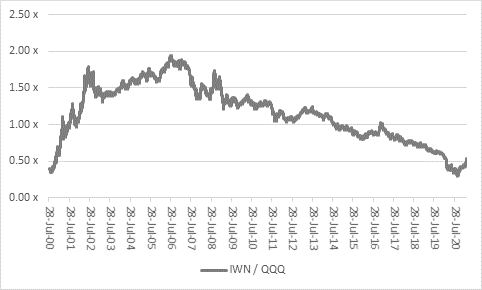 “Cyclical stocks outperformed growth names hands down for the thick end of seven years, right until the next recession hit, and did so to such a degree that it took nearly 15 years of outperformance from growth stocks for them to undo the damage. The chart hints at another major switch, but it may take a convincing economic recovery and the long-awaited return of inflation for cyclicals to really fight their way back into investors’ affections.”