IQE could yet earn a good slice from its wafers, even after testing first half

“As investors keep reading about shortages of silicon chips, strong demand for electronic gadgets and the wonders of fifth-generation (5G) mobile technology, they could be forgiven for being a bit disappointed with a first-half results statement from IQE which reveals an operating loss on a stated basis and offers no upgrades to management’s sales or profit forecasts for the year,” says AJ Bell Investment Director Russ Mould. “That may explain why the shares are down so sharply today, even if the company tends to march to its own beat – it does not make chips, but the wafers from which they are made, and it does not provide traditional, pure silicon wafer but more complex compounds, such as Gallium Nitride (GaN), Gallium Arsenide (GaAs) and Indium Phosphide (InP).

“These so-called epitaxial wafers are then used as the basis for chips that are used in specialist functions and products, such as mobile handsets, mobile telecom network infrastructure, 3D imaging and sensing and photonics systems for fibre-optic telecoms networks.

“These target markets enjoy demand cycles all of their own, which are as much led by technology and the shift to next-generation products as the wider economic cycle. This is a little different from the broader silicon chip industry, which follows a more typical boom-and-bust pattern, related to swings in demand caused by the economic cycle and swings in supply as manufacturers cut or increase investment according to where they think demand is going next.

“Current consensus forecasts are looking for an increase in global semiconductor sales of some 25% to a new all-time high of $550 billion. 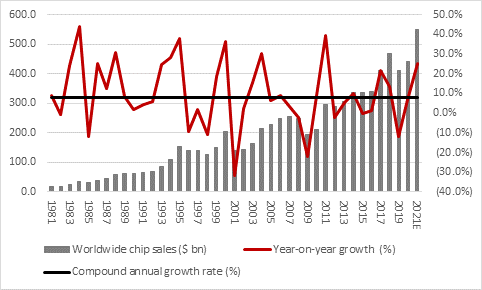 “This makes IQE’s forecast of broadly flat sales and flat (adjusted) earnings before interest, taxes, depreciation and amortisation (EBITDA), on a currency adjusted basis, all seem a bit more pedestrian.

“That implies EBITDA may not be much higher than it was in 2017, which may be why IQE’s shares trade at a four-and-a-half year low. 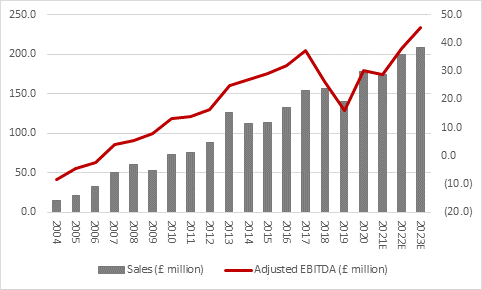 “However, Dr Nelson and the board are clearly preparing for faster growth going forward as the Welsh company’s capital investment budget for 2021 is between £20 million and £30 million, so its can expand its capacity to manufacture wafers in its specialist reactors, for which Germany’s Aixtron is a key supplier. (Aixtron’s shares are trading at a ten-year high on the Frankfurt exchange. 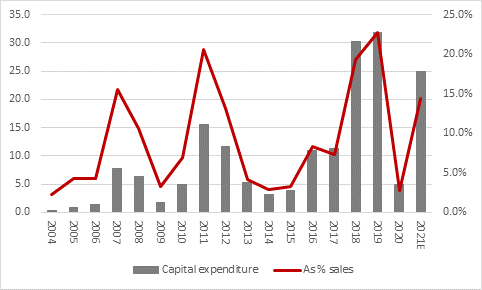 “This helps to underpin analysts’ forecast of rapid sales and profit growth in 2022 and 2023, as 5G mobile handset demand remains strong, 5G network equipment orders bounce back and the internet-of-things continues to drive demand for wirelessly connected devices.

“A balance sheet which is net cash, at least before £52 million of lease liabilities, means the Silicon Valley company can patiently invest for the future and weather any unexpected ebbs and flows in demand, although investors then have to tackle the vexed issue of the stock’s valuation.

“A forward price/earnings (PE) ratio of 20 for 2023 is the sort of territory that will put off deep value-seekers and appeal only to growth and momentum investors. Such a rating leaves little margin for error, although IQE’s £125 million in fixed assets and production equipment (compared to forecast annual sales for 2021 of £174 million) do mean that the business is highly operationally geared.

“Even a small change in sales could lead to a big increase in profits (although the opposite also holds true), so IQE’s lofty valuation could prove deceptive and rapid upturn in sales could mean the shares are a lot cheaper than they first appear.”