The delivery of a first-half trading update that was simply no worse than expected is proving enough to take Next to the top of the FTSE 100 this morning, helped by confirmation of the retailer’s special dividend plan and a rally in the pound, as well as the absence of any further profit warning. This is not to say the results were pretty.
3 August 2017
Share:

Full-price sales still fell 1.2% year-on-year in the first half and underlying, or like-for-like momentum is clearly weak given that space grew 1.5% during the period.

At least full-price sales grew by 0.7% in the second quarter alone, after the 3.0% slide during the first three months of Next’s financial year to January 2018, as Next Directory’s 11.4% growth offset a further 7.4% decline in the high street operations.

The update was therefore good enough to enable chief executive Lord Simon Wolfson to marginally upgrade full-year full-price sales guidance to -3.0% to +0.5%, compared to -3.5% to +0.5% after May’s trading update.

“Despite the prospect of a second straight drop in annual earnings, Next is still sticking to its plan to distribute four special dividends this year of 45p each. Two have already been paid and the third is due on 1 November.

“That 180p total pay-out for the year equates to a yield of 4.1% on the stock (at just shy of £44 a share) and that could be a good source of support for shares in a well-managed, well-financed firm that has a strong brand. 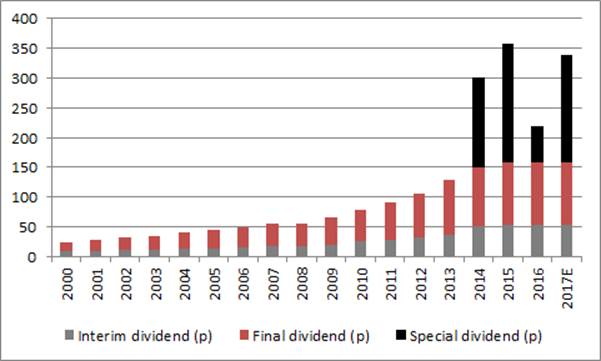 “However, Lord Wolfson did make it clear that the special dividend plan is contingent on profits matching management’s expectations and the shares’ awful performance over the last year does suggest that some investors feel the stock may be a “value trap,” with the lowly valuation and juicy yield set to prove illusory as Next becomes the latest retailer to be chewed up by shoppers’ switch from bricks to clicks.

“Fears over the indebted state of the UK consumer are weighing on the stock too, although management may be happy to see the pound continue its recent rise.

“A surge in sterling would provide some succour as it could potentially cut import and raw material costs, as well as dampen the inflation that is currently squeezing British shoppers’ spending power.

“While the past is no guarantee for the future, history does suggest the FTSE All Share General Retailers sector does look to do better when the pound is strong and less well when it is weak.