“Normally you would have thought that investors would be pleased to see a huge jump in pre-tax profits, an increase in the dividend and a meaty 12p-a-share special dividend but shares in Royal Bank of Scotland are still down, despite this tempting trio,” says Russ Mould, AJ Bell Investment Director. “This is because the quality of the earnings increase is poor, with a capital gain on disposal providing the bulk of the increase, there are signs that loan losses are ticking up and – most damningly – RBS is already backing away from its 2020 profitability targets.

“Thankfully, the days of seemingly never-ending losses are behind us but a return on tangible equity of just 7.5% in the first half (excluding the gain on disposal) leaves RBS miles away from its 12% target for 2020. 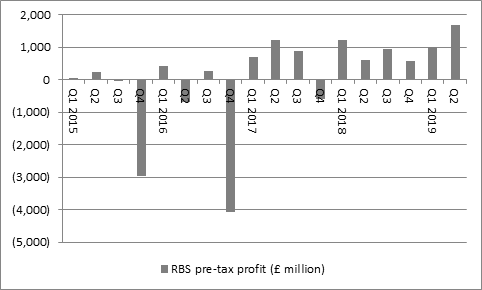 “Two factors in particular appear to be chipping away at the firm’s ability to generate its targeted returns.

First, net interest margins are under pressure. This measures how profitable RBS’ loan book is, as RBS borrows money in the short term (or attracts deposits) at one interest rate and then loans the cash out at a higher interest rate over the long term. The problem now is that as central banks look to cut headline rates, the yield curve is flattening and the gap between short and long-term rates is narrowing. That squeezes the banks’ net interest margin and hurts profits and RBS is feeling that squeeze. Its net interest margin fell to 1.83% from 1.89% in Q1 and 2.01% a year ago.

It will be of no consolation to RBS that Lloyds and Barclays are feeling the strain as well and this is a major problem for the banking sector overall – and as central banks’ bias now seems to be toward cutting rates rather than raising them, this problem does not look like going away in a hurry, either. 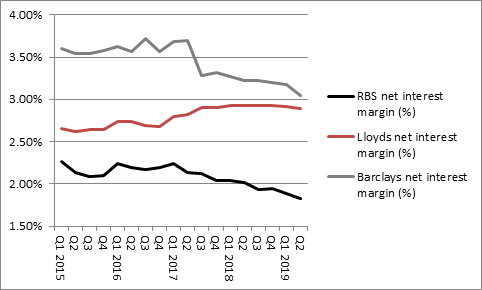 “Second, we look to have passed the bottom of the cycle for loan impairment losses, as they have started to creep higher again, albeit from low levels. This could suggest that the economic cycle is getting long in the tooth and that after a 10-year upcycle the risks associated with increasing loan books are growing.

“Again, Lloyds and Barclays showed the same trend this week, but that will not comfort shareholders in RBS, where Q2’s loan impairment charge of £323 million compared to £89 million in Q1 and £63 million in the second quarter a year ago. RBS’ charge for sour loans was the biggest since Q1 2014. 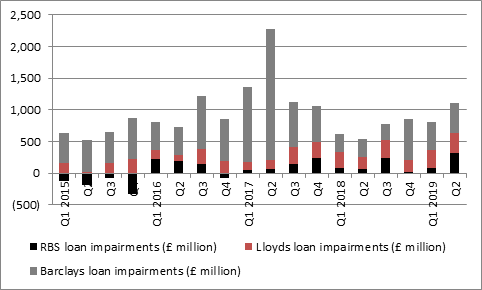 “Gathering questions over the loan book may be one reason why RBS’ shares persist in trading at a discount to the company’s stated net asset value per share of 290p, even though the dividend (including the 12p special) is going to exceed the consensus forecast of 12.9p that prevailed going into today.