“Marks & Spencer and SSE at least flagged their dividend cuts well in advance but Vodafone didn’t and neither did Royal Mail, whose relegation from the FTSE 100 last December and profit warning in January has now been followed by a big cut to its shareholder pay-out,” says Russ Mould, AJ Bell Investment Director. “Royal Mail will increase its dividend to 25p from 24p for the year just ended but then cut the annual distribution to 15p a share in the year ahead.

“Based on yesterday’s close of 211p and that 25p-a-share pay-out, Royal Mail’s shares were yielding 11.8% - a figure that just looked ‘too good to be true’ when interest rates on cash and the yield available on UK Government bonds are so low.

“The cut is therefore another timely reminder to investors to think about how much risk they are taking with their capital when they look for income. The yield was so high because the market was – politely – suggesting that earnings and dividend forecasts were too optimistic and therefore demanding a very high yield in compensation for the risks associated with holding the paper.

“On the face of it, Royal Mail’s adjusted earnings per share figure offered pretty much textbook dividend cover of around 2.0 times in the years that immediately followed its 2013 flotation.

“But stated earnings per share only offered cover around 1.0 to 1.5 times, less than ideal and certainly an insufficient level of cover in the event of any unexpected profit setback. And the year to March 2019 delivered just such a setback, as letter volumes sank more rapidly than expected, thanks in part to GDPR rules and the long-term shift away from paper and toward electronic means of communication.

“Last year’s profit slump took adjusted earnings per share cover down to just 1.2 times and stated cover to below 1.0 – and that is before management’s forecast of a further decline in profits for the year to March 2020. 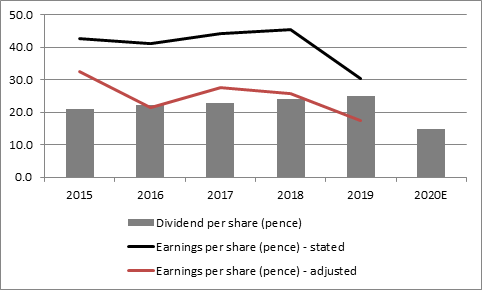 “This shows the dangers posed by management teams who champion ‘adjusted’ profit figures, not least because in this case Royal Mail’s cash flow struggled to cover its dividend payments from day one.

“Investors should always therefore look at the cash flow statement rather than the (adjusted) profit and loss account to see if a dividend is really safe or not, and do so in the context of the company’s wider cash needs. Check out the expenses it simply must meet – interest on its debt, tax, any pension fund top-ups and capital investment to defends its competitive position – and then see how much money is left to comfortably fund dividends (or share buybacks).

“Royal Mail is besieged by competition on one side and has the regulator on the other, so life is never going to be easy for the company, as the gradual erosion of profits and its ability to generate the cash needed to fund the dividend is proving.

“The bounce in the shares is probably a reaction to Tuesday’s swoon (and perhaps hedge funds closing out any astute short positions) and investors must now ask themselves whether a 6.7% dividend yield – based on the new goal of a 15p-a-share distribution and a share price of 222p – is sufficient compensation for the risks associated with owning the shares. Given the competitive, technological and regulatory challenges some investors may decide then answer is no, at least until there is a sign that profits and cash flow are starting to stabilise.”