“Higher selling prices, strong forward sales and a rapid recovery in profits at housebuilder Taylor Wimpey in the first half will all help to soothe investors’ nerves over what may happen to the UK housing market, as a new Help to Buy scheme starts and the stamp duty holiday comes to an end,” says AJ Bell Investment Director Russ Mould. “Chief executive Pete Redfern notes how Help to Buy supported just 27% of first-half reservations, against 53% a year ago, while a low cancellation rate of 14% and the FTSE 100 firm’s plans to increase its number of sales outlets by a fifth over the next two years both point to ongoing strong demand. 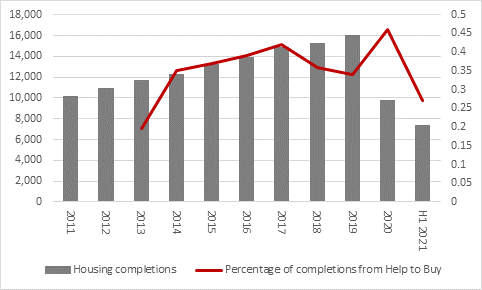 “Low interest rates, good mortgage availability and plentiful demand for dwellings are all underpinning both volumes and prices. It would not be a surprise if the pandemic boosts interest in homes relative to apartments, as buyers seek more space to facilitate home working and perhaps a garden for good measure. Taylor Wimpey’s average selling price rose yet again in the first half, reaching £327,000 for private reservations. That is 1% higher than the average for 2020 and nearly 7% higher than then first half last year, more than enough to offset higher input costs and drive operating margins upward.

“The first-half operating margin of 19.2% exceeds management’s initial guidance range for the full year of 18% to 19%. This may be one reason by management is pointing toward an operating profit figure of £820 million for 2021, compared to £292 million last year and the current analysts’ consensus forecast of around £760 million. 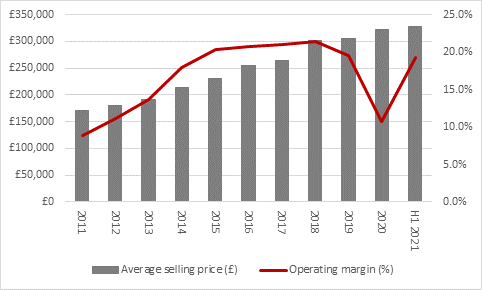 “Taylor Wimpey is also laying the foundations for future margin expansion and profit growth its land-buying programme. The company raised £510 million from shareholders last summer so it could acquire more land and it has begun to put that cash to work, with the result that the strategic land bank rose by some 8,000 plots to 147,000 in the first half. Taylor Wimpey is working hard to turn those into plots with planning approval and the company expects housing completions to move higher from 2023 onwards toward its medium-term goal of 17,000 to 18,000 dwellings a year.

“Yet for all of this good news, the shares still trade some 30% below their early-2020 peak. This may reflect nagging concerns over the long-term economic impact of the pandemic, the ongoing Competition and Markets Authority investigation into how leasehold dwellings were sold and also the prospect of a Residential Property Developer Tax, which the Government intends to launch in 2022 to help meet the cost of cladding remediation work – Taylor Wimpey has already set aside some £165 million for this, in two chunks, to cover fire safety improvements at apartment buildings built over the past 20 years. These provisions included buildings under 18 metres tall, which Taylor Wimpey was not obliged to do.

“On the regulatory front, Taylor Wimpey continues to work with the CMA to find a resolution. The regulator has given Taylor Wimpey scope to respond but the CMA has threatened legal action unless the current terms of sale on ground rents are changed.

“This uncertainty could conceivably hold back the shares, although another reason why they are trading below their early 2020 peak is valuation. At their peak of more than 230p, Taylor Wimpey’s shares were trading at more than two times net asset, or book, value.

“Book value rose 3% in the first half to 113.3p so Taylor Wimpey now trades at 1.5 times book value – smack in the middle of that range – although the prospect of further substantial profits means book value should rise over time. 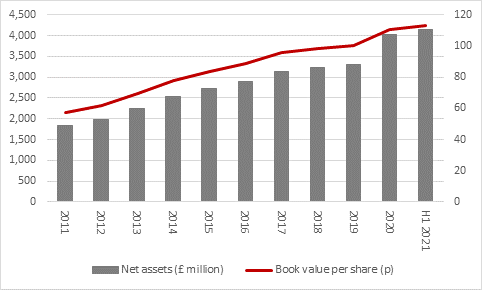 “That does leave scope for further share price appreciation – regulatory and cladding remediation costs pending – while income seekers will be pleased to see that 4.14p a share interim dividend, which equals the final dividend paid out in 2020. 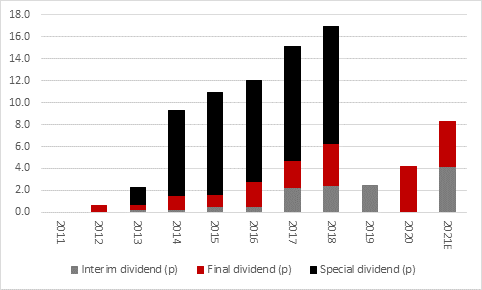 “Taylor Wimpey has raised its forecast for year end net cash to £700 million from £500 million, subject to the timing of land acquisition, and the firm is delivering on its target to return 7.5% of net assets to shareholders as dividends. For the full year, that implies a capital return of some £300 million, or just over 8p per share. That in turn equates to a dividend yield of 4.7%. 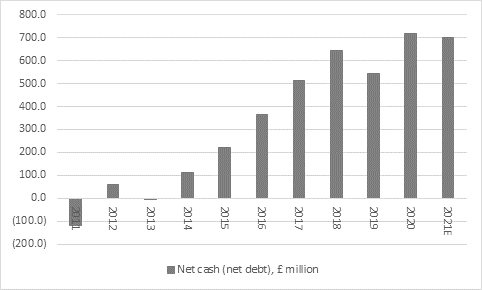