“The immediate pressure may be off, now that Tesla has repaid $1.1 billion in convertible bonds that matured in November and March, but Elon Musk and his colleagues face another $566 million repayment this coming November, even as the company continues to consume cash rather than generate it,” says Russ Mould, AJ Bell Investment Director. “The debate over whether the firm needs to raise fresh capital is therefore not going to go away. Given the loyal band of shareholders he has and the company’s massive market capitalisation it would make sense for Mr Musk to do so.

“For all of the difficulties which have beset the firm, Tesla still increased car production and deliveries by 123% and 110% year-on-year, with the result that automotive revenues rose 37%. This is no mean feat at a time when the global car industry is struggling for growth, as evidenced by today’s weak numbers from both Peugeot and Volvo Cars. 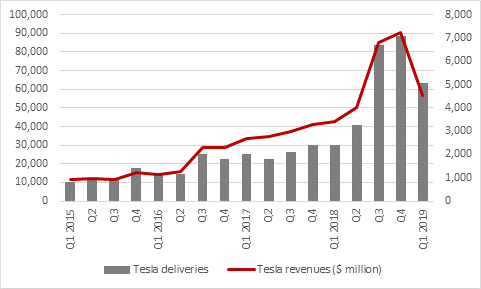 “Yet it seems likely these numbers would have received a warmer welcome had Mr Musk not continued to set short-term targets which the company failed to achieve and overseen a sequence of financial results which stretched credibility.

“After a long string of losses, Tesla then provided two quarters of profit in the second half of 2018, right when it needed them, so it had the cash to repay a $230 million convertible bond in November and then another $920 million convertible in March. Careful cost control helped here, alongside a surge in production and some changes to the firm accounted for the cost of that output, but the improvement proved unsustainable. 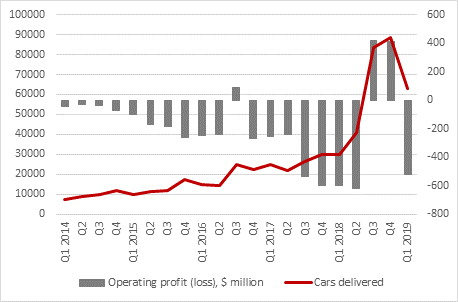 “Mr Musk may rail against the short-termism of markets, and his hedge fund foes in particular, but from his insistence in setting short-term goals in terms of production, profit and cash to a degree means he brings this upon himself.

“With the collapse back into hefty losses in the first quarter, Tesla’s cash pile is down to $2.2 billion and its net debt up to $8.8 billion. 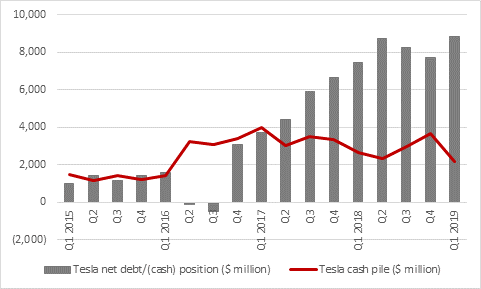 “The combination of operational gearing (how small changes in sales lead to big changes in profit) and financial gearing (large amounts of debt) is a very high-risk one and shareholders who believe in the Tesla story will doubtless be happy to provide fresh cash to lower that risk profile and buy Tesla time, as it hones its product and develops driverless technologies as it faces an onrush of competition from European, Japanese, Korean, American and Chinese rivals alike.

“The $566 million convertible bond that matures in November will have to be repaid unless the share price hits $759.4 dollars, something which seems pretty unlikely with the stock languishing at $258. Even Mr Musk’s putative takeover price last August was only $420.

“That repayment will further pressure Tesla’s cash resources and perhaps it is time for Mr Musk to bow to the inevitable and test just how much support from shareholders he really has – Tesla’s $45 billion market cap suggests that they still believe, even if that means GM has a higher value once more, at $56 billion, thanks in no small part to gathering investor interest in its Cruise Automation autonomous car operation."