Tesla has underperformed Exxon since promotion to the S&P 500

“It almost three months since Tesla was promoted to the S&P 500 (21 Dec 2020) and just over six since oil major ExxonMobil was demoted from the Dow Jones Industrial Average (31 Aug 2020),” says AJ Bell Investment Director, Russ Mould. Both moves will have delighted those investors who apply strict environmental, social and governance (ESG) screens when they select stocks, as well as ‘green’ campaigners more generally – but the irony is that ExxonMobil and the price of West Texas Intermediate crude oil have outperformed Tesla and its newly-crowned Technoking in share price terms since both dates.

“Since its demotion and replacement by Salesforce.com in the 30-stock Dow Jones, ExxonMobil is up by 51% and West Texas Intermediate is up by 53%, while Tesla is up by (a still impressive) 42%.

“In addition, ExxonMobil has declared two quarterly dividends of $0.87 a share each, worth $7.4 billion in total while Tesla asked shareholders for more money in both September and December, raising $10 billion in two tranches. 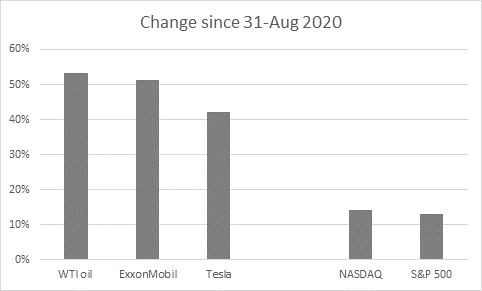 “ExxonMobil and oil have also proved too slick for Tesla – purely from a portfolio returns perspective – since Tesla made it into the S&P 500, where is it now the sixth-biggest stock by market cap, behind only Apple, Microsoft, Amazon, Alphabet and Facebook.

“ExxonMobil is up 44% since late December, compared to a 10% advance by Tesla. 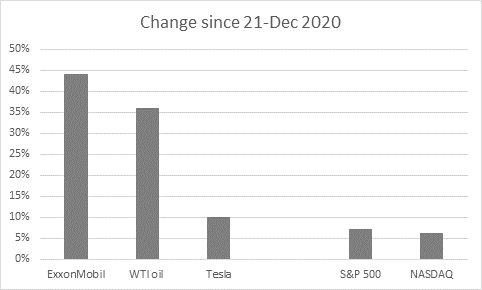 “Whether this means it is too early to write-off Big Oil once and for all is hard to say, given the short timespans involved, but it does raise important questions for investors and portfolio allocations.

“Those investors who run strict ESG screens will be entirely unmoved, in the view that sacrificing a few percentage points of returns in the near term is a price worth paying if their invested companies do no, or much less harm over the long term.

“Moreover, they will assert that they are still having the last laugh, in that Tesla’s market cap of $680 billion still dwarfs that of ExxonMobil, now priced at $256 billion - even though the oil major is now back in the black and Tesla has yet to prove it can consistently make money from manufacturing vehicles and not just by selling regulatory carbon credits. 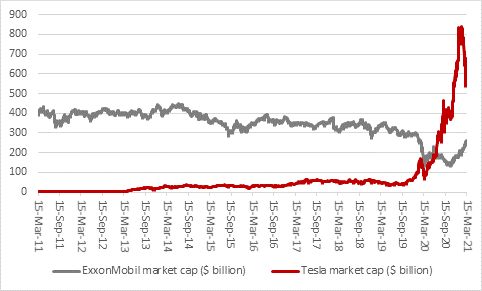 “Investors who view portfolio building as a matter of nickels and cents, dollars and dimes, will still have much to ponder, should they hold oil stocks. They will question Tesla’s market cap, given that it has yet to prove it can consistently make money from manufacturing vehicles and not just by selling regulatory carbon credits. But ExxonMobil lost money in all four quarters of its last fiscal year and faces long-term questions over oil demand.

“Ultimately, it may come to a matter of time horizon, but also valuation. Tesla’s $680 billion price tag means it must now match or exceed very lofty expectations for growth and profits. ExxonMobil must cross a much lower bar if it is to surprise on the upside and get its shares going, even allowing for its $256 billion valuation.

“Looking out even to 2023, ExxonMobil trades on just 15 times consensus earnings forecasts, with a dividend yield of 6%. Investors are demanding such a lofty yield to compensate themselves for the risks associated with the stock, the biggest of which are commodity price weakness (which could leave the earnings forecasts looking too optimistic anyway) and the long-term shift away from hydrocarbons.

“For the same year, Tesla trades at 102 times earnings, with no yield. The downside protection is less should anything unexpected go wrong, such as loss of share to competitors, technical problems or further corporate governance shenanigans. Upside potential rests with future product developments and leadership in areas such as autonomous driving.

“Investors can therefore pay their money and make their choice. But the experience of the last three to six months suggest that ignoring valuation and just following a narrative, no matter how worthy, may not be the best path to optimum performance, at least when looked at purely through the lens of investment returns.

“It all depends upon what is priced in.

“BP’s last annual World Energy Outlook, released last September, offers three scenarios for demand for crude oil in 2050. They range from 89 million barrels a day, barely 10% below 2019’s peak of 98 million as nothing much changes politically or socially, all the way down to 24 million, as the world goes carbon neutral. 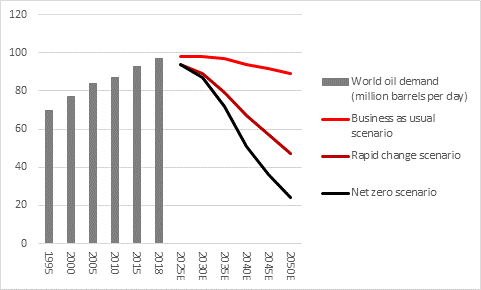 “When ExxonMobil’s shares hit a 17-year low in 2020, before its ejection from the Dow, it could be argued that a gloomy long-term outlook for oil demand was at least partly priced in. Contrarians would add this was especially the case when oil stocks market cap fell to an all-time low of 1.9% of the S&P 500’s total value in the autumn. 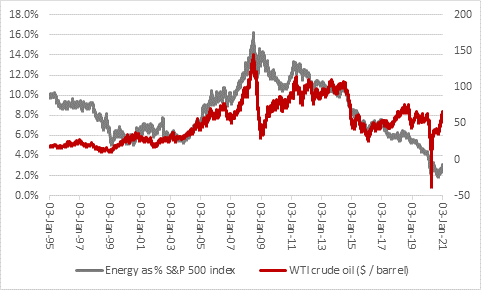 “Even now, they represent barely 3%, so long-term declines in oil consumption are still assumed by equity valuations. This could well be right (and many will fervently hope that it is so) but this at least sets a low bar for expectation, so it still may not take too much to fuel further performance from oil equities, especially if the latest market narrative – the return of inflation – starts to gather additional credence.”