“While Monday’s collapse in the price of Thomas Cook’s bonds was catching most investors’ attention, the traded loans of another voracious cash-consumer were also sliding ever lower – electric car and solar power specialist Tesla,” says Russ Mould, AJ Bell Investment Director. “The $1.8 billion traded loan that pays an annual coupon of 5.3% - and is due to be repaid in 2025 – has hit a new all-time low of barely 82 cents on the dollar.

“Coming after Tesla’s successful move to raise $2.4 billion in shares and fresh (convertible) debt this suggests a marked lack of faith among investors in the company’s ability to start to consistently make a profit and generate cash. 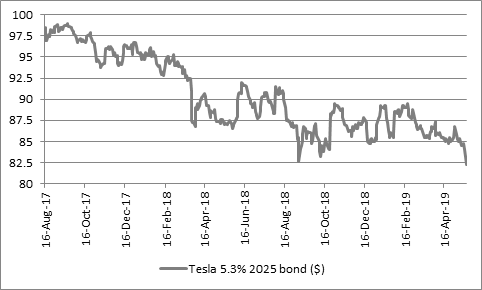 “Even the new loan issued at the start of May, which comes with a 2% coupon and will either be repaid or convert into new Tesla shares in May 2024, is already trading below its issue price in the USA. That paper has slipped to 90 cents on the dollar in barely two weeks. 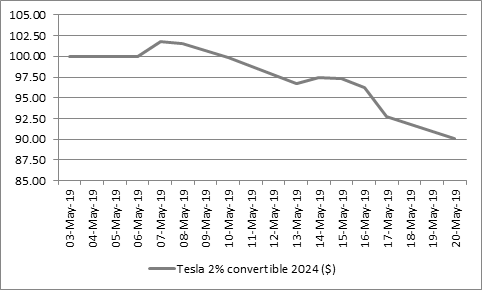 “Tesla has confounded the doubters before. The firm managed to repay a $230 million loan in November 2018 and another $920 million in debt in March when Tesla’s share price came in below the price at which holders had the option to take up new shares rather than accept repayment ($560.5 in the case of the former and $359.9 in the case of the latter.

“However those repayments have put strain on Tesla’s finances, especially as the firm’s first-quarter production and shipment numbers disappointed.

“Granted, Tesla still increased car production and deliveries by 123% and 110% year-on-year, with the result that automotive revenues rose 37% in the first quarter – no mean feat at a time when the global car industry is struggling for growth. 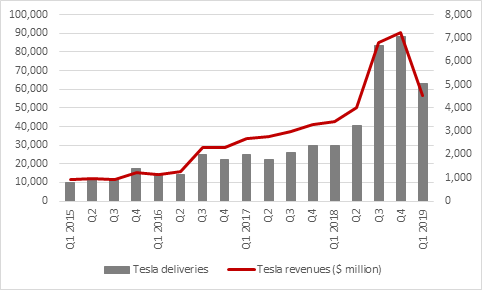 “But after two quarters of profits – uncannily just as the company needed them so it could repay those two loans – Tesla plunged back into loss in the first three months of the year. 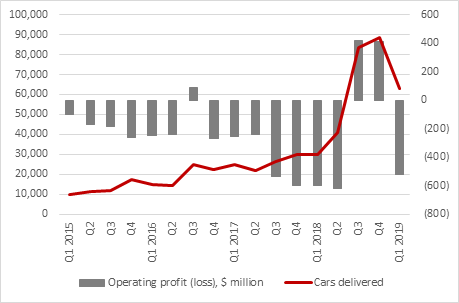 “Those losses in turn whittled Tesla’s cash pile down to $2.2 billion and took its net debt position up to $8.8 billion. 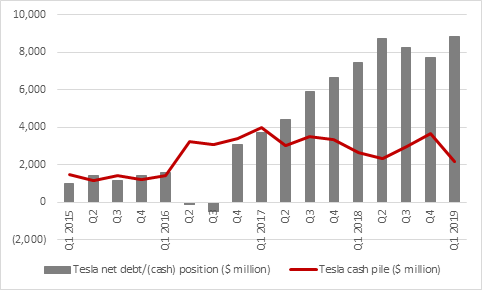 “That is why chief executive Elon Musk finally bowed to the inevitable and sanctioned May’s $2.4 billion capital raising via new shares and fresh debt to reassure investors, suppliers and customers alike.

“But the bonds keep sinking and the share price is now struggling to hold onto the $200 mark, a level last seen in December 2016 and one way below the $380 high reached last August when Mr Musk issued his controversial tweet about taking the company private at $420 a share.

“The combination of operational gearing (how small changes in sales lead to big changes in profit) and financial gearing (large amounts of debt) is a very high-risk one.

“Shareholders and lenders who believe in the Tesla story are clearly happy to provide further financial support. But their patience may be tested if Tesla fails to ramp up production and shipments and live up to analysts’ earnings forecasts, not least as that would raise the prospect of further capital raisings at a time when European, Japanese, Korean, American and Chinese rivals alike are rolling out rival electric vehicle models in huge numbers to raise the stakes even more.

“Tesla has another $566 million bond to repay in November of this year (unless the share price gets to $759 and investors decide to convert the debt into new shares) and another $113 million convertible matures in December 2020 (where the conversion price of $300 is not quite so outlandish, even if it looks a long way away right now).”