“The New Year has begun as the old one ended, with a lot of volatility. It will therefore be of no surprise, at least to the cynically-minded, that the three main sources of investor angst in 2018 – the US Federal Reserve, the White House and China – are already trying to offer comforting words as their credibility rests to varying degrees on stock markets and the supposed wealth-effects and feel-good factors that they can bring,” says Russ Mould, AJ Bell investment director. “Fed chair Jay Powell is promising to be patient with interest rate increases, President Trump is sending Jeffrey Gerrish and David Malpass to new trade talks with China and Beijing’s leader President Xi is sanctioning both fiscal and monetary stimulus.

“All three developments are being welcomed with relief but whether they bring lasting relief to wobbly stock markets remains to be seen, even if the fourth-quarter downturn means valuations are now more attractive, with the UK in particular looking cheap, as the FTSE 100 trades at barely 11 times forward earnings and offers a 5.1% dividend yield for 2019.

“For all of the honeyed talk, it is actions that matter and investors will need to pay close attention to three macroeconomics trends that caused them a lot of discomfort in 2018. If these trends break or reverse then 2019 could offer better portfolio returns than the last 12 months.”

“Fed chair Jay Powell is now promising that American interest-rate policy is not pre-set and that further increases will be data dependent – but it looks like the US central bank’s Quantitative Tightening (QT) programme is still on auto-pilot, because it is proceeding with a plan to shrink its balance sheet by up to $50 billion a month.

“The Fed has already unwound $458 billion of Quantitative Easing (QE) or some 13% of the stimulus applied by 2009. Even this relatively minor withdrawal of liquidity appears to be taking its toll on stock markets and risk assets more generally: 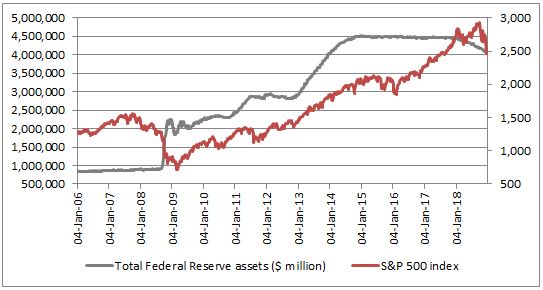 “Add in how the Bank of England and European Central Bank have stopped adding to their QE schemes and how the Bank of Japan is undershooting its ¥80-trillion-a-year target and central banks are no longer pumping as much liquidity into the financial system. No wonder traders are unhappy – who wouldn’t be if a limitless supply of free money were taken away?

“With only the Swiss National Bank running QE at full tilt, this withdrawal of stimulus still represents a key challenge to financial markets and one that may require strong profit and dividend growth to take up the slack in 2019 and beyond. 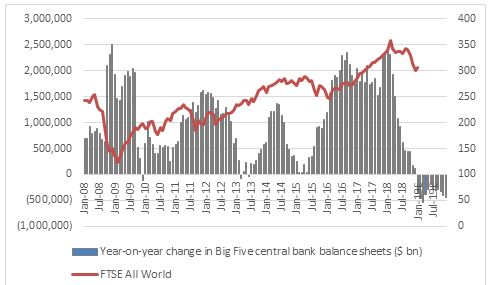 “Real dollar strength has tended to coincide with times of uncertainty or even outright financial market stress (such as 2001-03, 2008-09 and even during this decade’s eurozone debt crisis).

“Global stocks eventually came a cropper after a period of sustained dollar gains in 2000, thrived on the weakness of 2002-07 and then plunged again as the buck briefly soared in 2007-09. All of this makes advances forged this decade appear like an interesting outlier, although a rising dollar did not immediately interfere with the bull market of the late 1990s.

“Which is the chicken and which is the egg may be a matter of debate. But a bouncy buck tends to signal trouble so investors will be hoping that the DXY trade-weighted dollar basket, nicknamed Dixie, will start to weaken again, as it currently stands at close to 12-month highs and some 5% above where it was at this time last year. 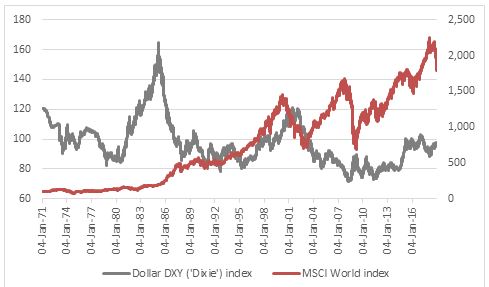 “Emerging stock markets have been particularly sensitive in the past to the greenback, falling when the buck bounces and gaining when it rolls over. Dollar strength preceded the 1982 Mexican debt crisis, 1994’s so-called ‘Tequila crisis,’ also in Mexico, the Asia and Russian debt and currency collapses of 1997-98 and also heralded a period of deep Emerging Market (EM) equity underperformance relative to developed arenas in the first half of this decade.

“It may therefore be no coincidence that 2018’s dollar strength coincided with chaos in Turkey and Argentina and a widespread downturn in EM currency, bond and stock markets, with Asia particularly badly hit, owing to concerns over China’s economy and currency in particular.

“The so-called credit spread is the premium interest rate which a company with a weak balance sheet must pay relative to one that is well financed or relative to a Government.

“As such there is no need to panic, but the spread bottomed out at 1.57% in February 2018 and has been rising consistently ever since.

“This suggests that lenders (and investors) are becoming more nervous.

“If they start to demand ever-higher returns in return for the risks they take, this could be a sign of trouble ahead, as companies have largely been fuelling their buyback binge and merger and acquisition boom with fresh debt.”