Debenhams shares sank 4% to levels not seen since the end of the last bear market in spring 2009 as new chief executive officer Sergio Bucher admitted that trading in the 15 weeks to 17 June had been “volatile”.
27 June 2017
Share:

“It is too early to judge the merits of Bucher’s new strategy for Debenhams, barely two months after its launch, but investors are clearly in an unforgiving mood judging by their response to the department store’s third-quarter trading update.

“Relegated this month from the FTSE 250 to the FTSE Small Cap index, Debenhams rejoined the market after a spell in private equity ownership in May 2006 via a flotation priced at 195p a share - a level exceeded subsequently on just six trading days: 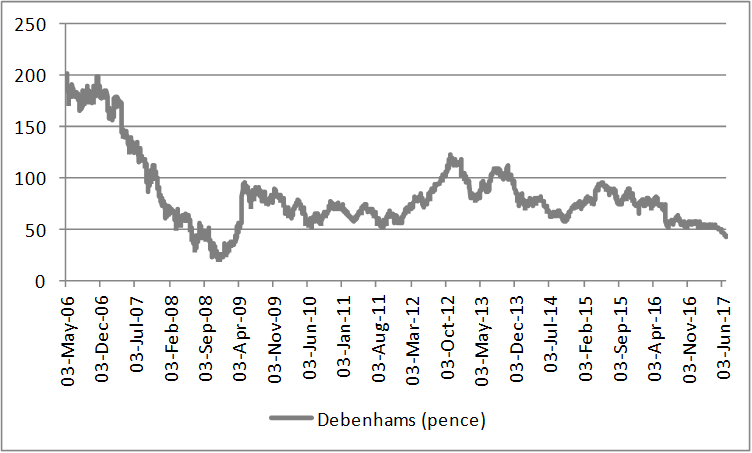 “As a result the new boss acknowledged that full-year profits could come in toward the lower end of market expectations if these trends persist in the fourth quarter. The current analysts’ consensus forecast is for a 5% drop in pre-tax profits to £100 million.

“Bucher will draw encouragement from strong food business, improved full-price sales and growth in the mobile and online revenue streams but Debenhams’ Achilles heel remains its store estate, which comes to 165 in the UK with more in Denmark and Ireland.

“In 2015-16 the company’s lease expenses on these properties came to £221 million and future payments on existing leases (described in the 2016 annual report and accounts as “non-cancellable”) are estimated to be £4.6 billion, based on current terms and conditions.

“This is a considerable burden on the company and one that investors must take into account as they ponder whether Debenhams’ shares are now looking very cheap or are nothing more than a classic value trap.

“A forward price/earnings ratio of 6.5 times compares to a forecast dividend yield of 8%, based on a 42.75p share price and consensus forecasts of 6.55p for earnings per share and 3.42p for the dividend.

“On the face of it, the dividend is relatively well protected, too: forecast earnings cover the payout by 1.9 times and the company has only £217 million of net debt, with a pension scheme surplus:

Source: Company accounts, based on 2015-16 numbers for balance sheet and cash flow figures

“Debenhams therefore passes most of the scratch and sniff tests – but the market is clearly concerned that trading will continue to deteriorate, with two implications:

“There is no danger of Debenhams not being able to meet those leases unless profits go down by an awful lot more, so the balance sheet will buy Bucher some time.

“But as the clicks versus bricks battle rages on, investors seem willing to take few chances, especially as UK consumer credit growth is now slowing and wage growth is being outstripped by inflation.”