“As arguments continue to rumble over whether the Office for Budget Responsibility is too bearish on the UK economy and the implications of Brexit, Chancellor Philip Hammond will be pleased to see the second estimate for third-quarter UK GDP growth come in unchanged at 0.5% quarter-on-quarter,” says Russ Mould, investment director at AJ Bell.  “This is enough for the third consecutive improvement in the year-on-year growth rate.” 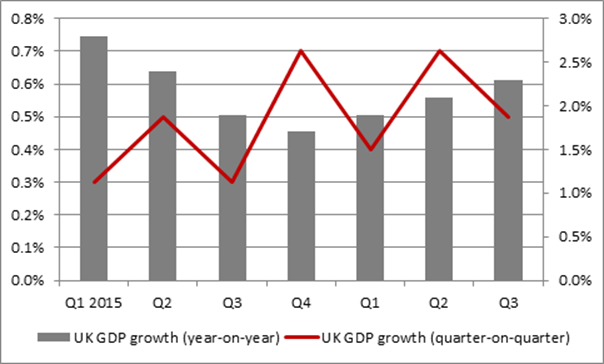 “This is not to say the UK is out of the woods, as the economy has yet to achieve the balanced craved by Mr Hammond’s predecessor, George Osborne.

“It is to be hoped that the weaker pound will help to galvanise manufacturing and exports going forward, although increased import costs could hamper retailers and the service sector, especially if companies find it hard to force through price increases to compensate for the rise in raw materials bills.

“The dependence on the services and consumption, and the wobbly construction numbers, also help to explain why Bank of England Governor Mark Carney appears to be in no rush to increase interest rates, as it is possible that increases in borrowing costs could do damage to what remains a heavily indebted economy, at the sovereign, corporate and consumer level.”